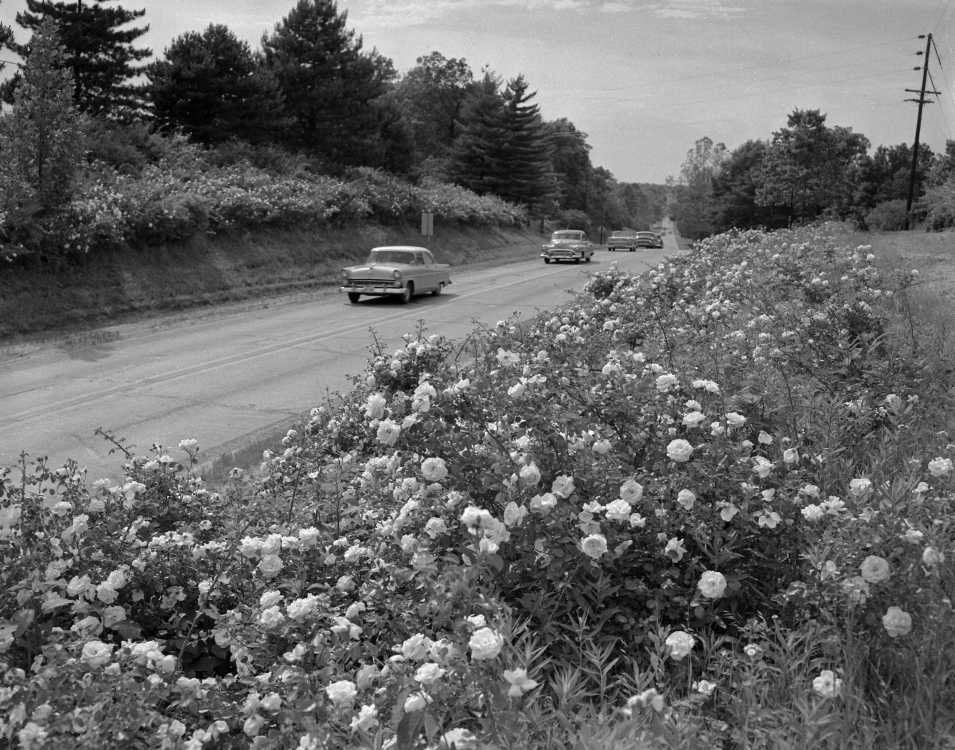 The 40th anniversary of the Cape Special Road District was marked with the publication of a booklet in 1952 dedicated to its civil engineer, Dennis M. Scivally. The road district established the Ten-Mile Garden between Cape Girardeau and Jackson. The picture was made by G.D. Fronabarger.

Here is an excerpt:

Ten-Mile Garden --a wonderland of color and fragrance in early summer when nearly 10,000 rose bushes burst into riotous bloom--has beauties to delight even the most casual motorist all the year 'round. Working with right-of-ways of 125 to 270 feet for the ten miles of Highway 61 between Cape Girardeau and Jackson, the Cape Special Road District began in 1931 one of the most extensive roadside development projects ever attempted. Through the years it has gained nationwide fame, and thousands of motorists have seen and enjoyed its beauty.

It was in 1931 that the Cape Special Road District, with the cooperation of the State Highway Department, started the development of the Ten-Mile Garden. Soon the modest beginning mushroomed, and service clubs and garden clubs, along with interested individuals, of both cities were clamoring to participate in the plantings. Thus the Ten-Mile Garden became truly a "people's project" in which everyone takes pride.

Besides the 10,000 roses, there are 1,317 evergreens and 14,000 other varieties of plants along the scenic route. Property owners along the Ten-Mile Garden, like those along Cape Rock Drive, take pride in their "front yard," and do all they can to add to its beauty.

Cape Special Road District, having established Ten-Mile Garden and carried it to a high stage of development, has since 1939 not participated to such a great extent in the further growth and maintenance of the route. Most of the work is now being done by the Missouri State Highway Department, carrying on the tradition of combining utility with beauty.

Here is a picture of Dennis M. Scivally, circa 1957, and his professional background.