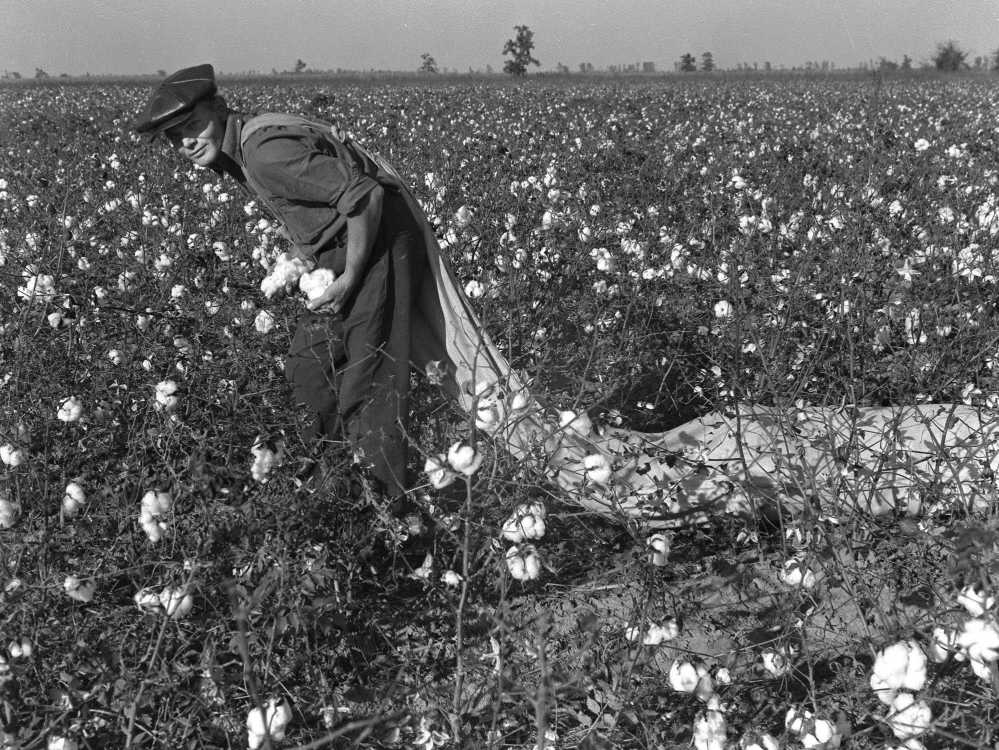 A cotton picker was photographed by G.D. Fronabarger possibly in 1947.

Fred, We were in Cape County this past weekend visiting family. The picture was a major topic. I zoomed in on the picture and we are all thoroughly convinced that is my father, Jesse McIntyre Jr. The cheek bones, grin, and stature. My father would often tell us how they moved around in search of employment. They lived in Jackson, Salcedo, Essex, Morehouse, and a place called Sandspur. He worked as a hand on several farms where he picked cotton and other crops. If the picture was taken in 1947, it would have been during his break in service from the Navy. Dad had served in the South Pacific. He was out for a short period after the war before going back into the Navy. He would eventually make it to McDonnell-Douglas where he was involved in the Gemini and Mercury space programs. After my parents retired, they returned to their place out in Oak Ridge. My father survived the Depression, war in the Pacific, antics of his children, and help place a man in space. He probably envisioned a family or putting a man in space when that picture was taken. Thanks for putting the picture in the paper and have a wonderful Thanksgiving. V/r Jesse

A story in the Southeast Missourian's annual Achievement Edition of Jan. 31, 1948 included a photograph of cotton pickers.

Not way down in Dixie, but in Scott County where cotton is a major crop. In the lower counties of southeast Missouri--Scott, Mississippi, New Madrid, Pemiscot and Dunklin--cotton provides the major source of farm income, although in recent years being closely approached by the soybean. Cape County lies on the northern boundary of the cotton country, the crop being found in the south part of the county but not in the north section.

Mechanical cotton harvesters are available which under favorable conditions will retrieve from 70 to 90 percent of the crop, but so mixed with leaf and trash that it will not gin to a grade that compares with hand-picked cotton. These machines are heavy and complicated; they are yet too expensive to be relied upon to harvest any major portion of the crop. For some years, therefore, the cotton acreage must be limited to the supply of labor to harvest the crop satisfactorily.