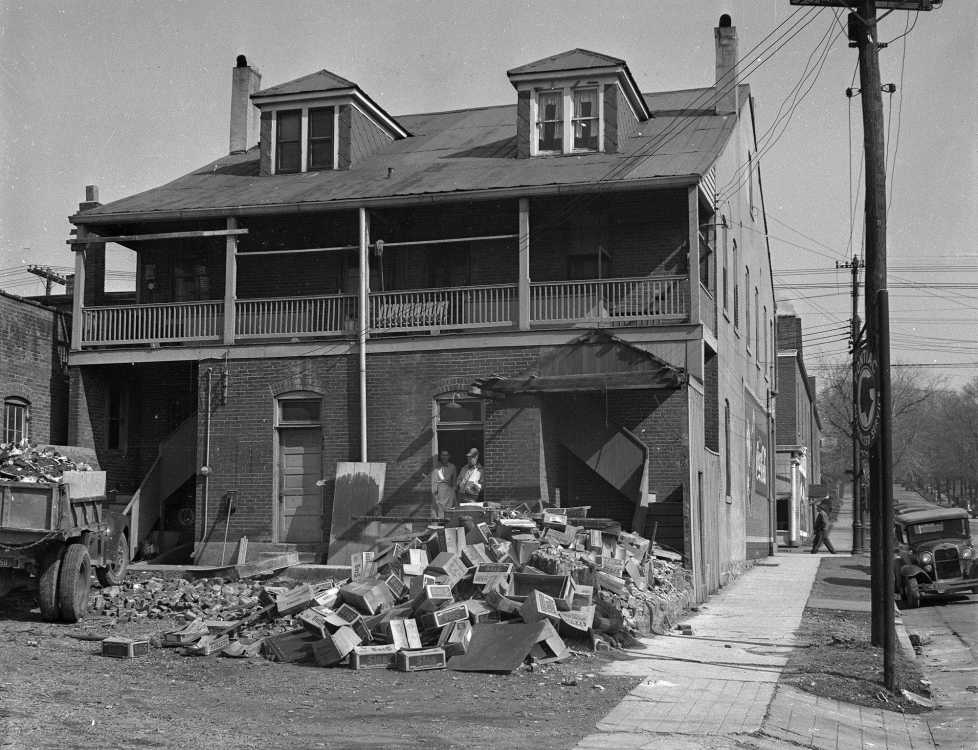 The 79-year-old building at the southwest corner of Broadway and Pacific street is getting its face lifted and besides, literally getting its pants patched. Built in 1870 by F.C. Kreager, father of Mrs. Josephine Daues, 117 North Frederick street, the structure has stood until the past year without any major improvements to speak of.

Several days ago, as is shown in the accompanying picture, an old addition to the building at the rear was torn down. This was used for many years as a smokehouse and in recent years for storage. A parking lot is being readied at the rear of the building with an entrance from Pacific street, and a new front is being constructed on the building.

Mr. Kreager operated a general store in the corner room of the building and a little later opened a saloon in the west side of the building, which then for more than 40 years was operated by Oscar Becker as the Last Chance establishment. Mr. Kreager also had one of the early general stores in the community, in a small building which stood at Broadway and Perry avenue.

Mr. Kreager died in 1882. Sherman Freeman came here from Egypt Mills and operated a general store in the corner room for more than 25 years. The Kreager family resided on the second floor of the building when it was erected and the second floor has since served as living quarters for many families. Anton Wulfers bought the building in 1916 and his sons have charge of the present business, now taking in all of the ground floor.

Last Chance gets one more chance as High Water Cafe

It has been called the First Chance.

It once was known as the Second Chance.

Now, it may have one more chance.

A landmark building, which stands on ground originally owned by the Spanish commandant of the area, Don Louis Lorimier, has been purchased by its fourth owner in history, and will become the High Water Cafe, a tea and coffee shop.

At the time of construction, Pacific Street was the city limit and the road in front of the saloon was a narrow, dirt pike called Harmony.

French Village is out, Broadway Court is in.

The former "Last Chance" Saloon, a historic building that housed a bar or tavern for more than 100 of its 120 years, has been taken down at the corner of Broadway and Pacific. A new parking lot to serve the new Broadway Court has been added at that corner.

See this earlier blog for more on the Last Chance.