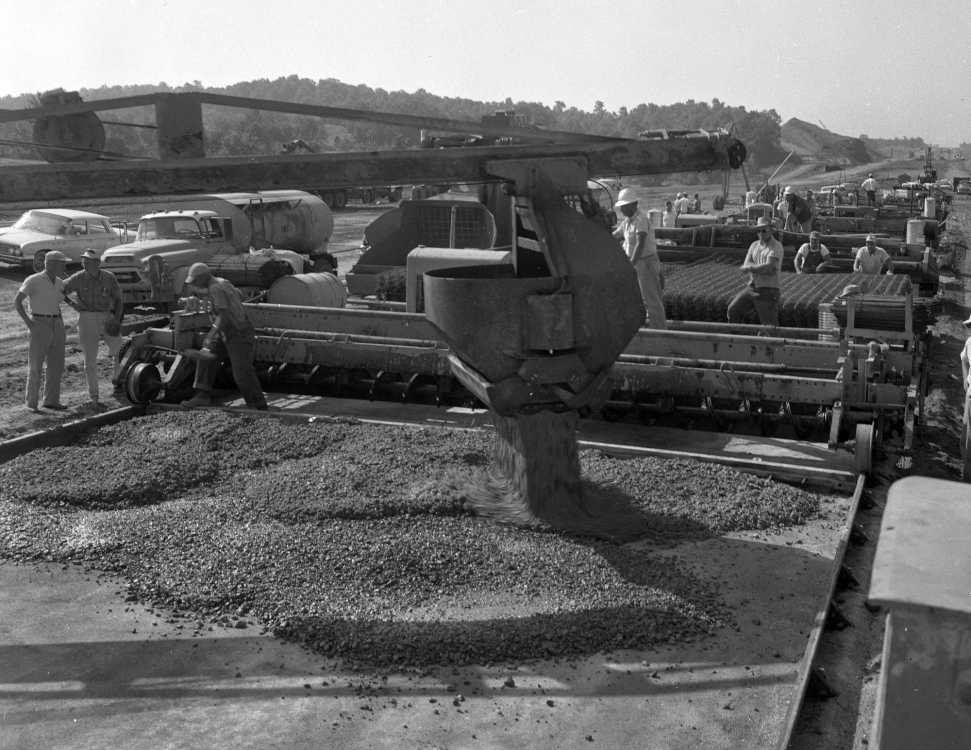 This is the first bucket of cement poured on the Cape Girardeau section of Interstate Highway 55. The site is two miles north of Wedekind Park at a point just north of Old McKendree Chapel. The construction train shown here is a concrete pavement assembly line. Rolling on tracks, the assembly pours the concrete, levels it, removes any air pockets, finishes it and leaves behind a complete project. The contractor is shooting for a mile of paving a day in the continuous process. (Photo by G.D. Fronabarger)

Mr. Harrison, whose firm is associated with the R.B. Potashnick Co., in the 14-mile federal highway project, said the weather this year has so far been unusually bad and has slowed construction work, including the start of paving.

The only paving done by Potashnick-Harrison has been on new roadway along Highway 61 between Cape Girardeau and Jackson.

With paving of the interstate starting immediately, three paving machines will be used for the main line of highway while another paver will be used to lay concrete on the interchange ramps, Harrison said.

Wendell Hubbs, an official in the construction department of the State Highway Department office at Sikeston, estimated about 55 per cent completion of work on the project. This includes, he said, all work, including the grading, bridge building, construction of concrete culverts, interchanges and pipes and headwalls for storm drainage.

Mr. Harrison agreed with this completion estimate but said it would be more accurate to apply the 55 per cent figure to the amount of money spent in the $7.8 million project.

Although Potashnick officials said last summer that a completion date of December of this year had been hoped for, Mr. Harrison said today that he could not predict at this time when the highway could be completed.

The contract for the project specifies no required completion date, Mr. Harrison said, but there are a set number of working days in which the job must be finished.

Hypothetically, with paving starting now with no interruptions caused by weather, Harrison said it would take several months or more before the project could be finished. He noted that even a slight amount of rainfall can hamper the work of the big machines, including the pavers, trucks and graders.

Up until now, finishing touches have been put to the remainder of grading work, bridge building and interchange construction. The paving of the four-lane, divided route, which stretches from Fruitland to near Scott City, will link the already completed structures in between.

The concrete will be mixed b Potashnick-Harrison, utilizing crushed rock supplied by the Porter-DeWitt Co., of Poplar Bluff, a subcontractor in the project, and cement supplied by the Marquette Cement Mfg. Co. An estimate last year placed the amount of cement to be used at 200,000 barrels with four bags of cement being figured to the barrel.

The Interstate Highway 55 route is part of the federal highway network that calls for a hookup of Chicago, St. Louis, Memphis and New Orleans. Mr. Harrison said the huge traffic artery is scheduled for completion by 1972, providing Congress keeps adequate appropriations coming each year.