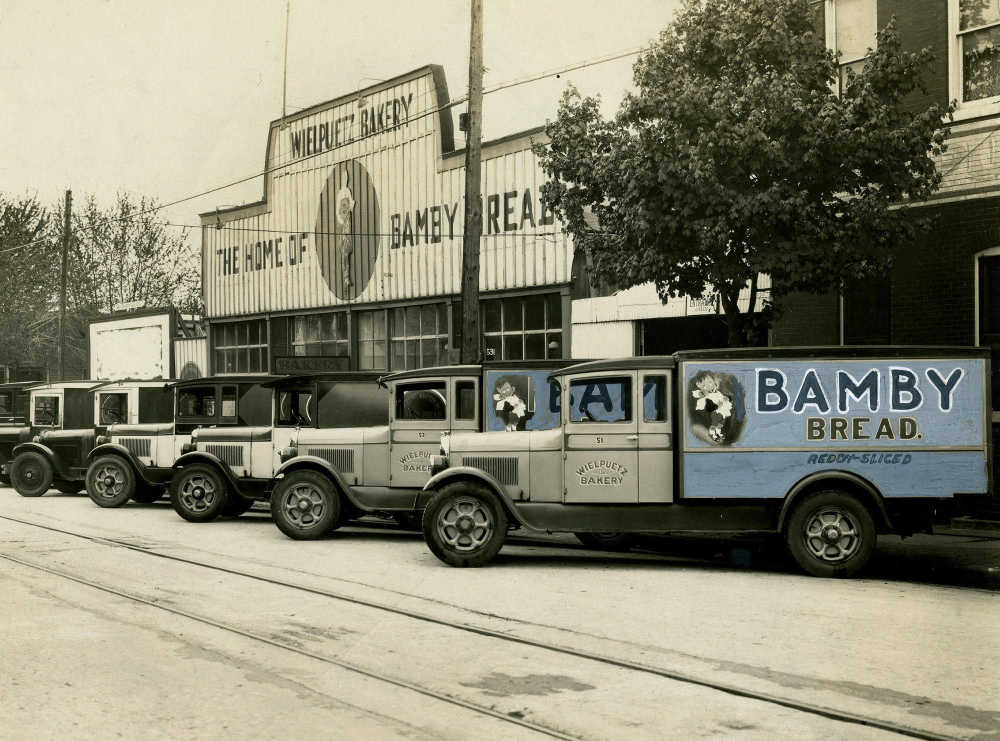 This is an interesting photograph which is obviously retouched. It shows the Wielpuetz Bakery, "The Home of Bamby Bread," with its delivery trucks on Good Hope street.

The photo was published in the 25th anniversary edition of the Southeast Missourian on Oct. 3, 1929.

Reddy-Sliced will keep for days without molding or drying out. It is all ready to serve, each slice cut the same. It means that you have no waste when you serve bread at the table, and it does away with the waste when the kiddies want a piece of jelly bread. Each loaf is placed in an individual tray and holds the loaf of bread in shape at all times. It is wrapped in waxed paper that is moisture proof. Be sure and have your store deliver a loaf of Reddy-Sliced Bread for your next meal.

Our librarian, Sharon Sanders, found these notes from Out of the Past:

1911 C. Wielpuetz and his three sons, Arthur, Ernest and Max J., transferred their bakery to Cape Girardeau from Fornfelt.

Quite a lot of excitement is created in Haarig in morning, when horse belonging to Wielpuetz bakery and hitched to delivery wagon runs away; loaves of bread are scattered in street for a block; thirsty animal makes direct run from bakery to watering trough on South Sprigg, where it is caught.

Wielputz Bakery is improving old Orpheum Theater and will move its offices there; old theater is in process of being repainted and completely overhauled; business has grown so large in last year, that bakery finds it necessary to expand; back part of theater will serve as storeroom and front part will be used for offices.

Wielpuetz Bakery has sprung another good surprise on public; fine, big new loaf of bread called Milk Maid, wrapped in sanitary paper and as appetizing as can be, is being turned out; by making big loaf and charging 15 cents for it, there are more ounces of bread for money than smaller loaves.

Cape Girardeau will lose one of its most successful businessmen; C. Wielpuetz and his wife will leave here about Oct. 1 for Los Angeles...; Wielpuetz came to Cape Girardeau 12 years ago from Illmo where he had been in bakery business for nine years, following four successful years at Marissa, Ill.;... bakery here will be managed by his son, Max Wielpuetz; another son, Arthur Wielpuetz, will have charge of bakery in Poplar Bluff.

Fire, believed to have originated from spark from oven, for a time threatens plant of Wielputz Bakery at Good Hope and Frederick streets; flames are extinguished after slight damage is done to roof; hundreds of gallons of water were thrown onto hot baking ovens, causing them to cool rapidly, and Max Wielputz, manager, fears that sudden cooling will cause brick in oven to crack.

"Bamby Bread," made with pure creamery butter, is being baked at Wielputz Bakery in Cape Girardeau, and campaign is being conducted by S.E. Loveless Co., Inc., of Philadelphia to interest local housewives in new commodity; a pound loaf of bread sells for 10 cents.

Max Wielpuetz announces he has purchased interests of his father and two brothers in Wielpuetz bakery; purchase marks formal retirement of C. Wielpuetz, father of Max, from baking business; elder Wielpuetz established bakery in Cape Girardeau 17 years ago and remained active in business until few years ago.

Bamby Twist is the newest wrinkle in the bread industry; Max Wielpuetz has installed a "twisting" machine at his bakery at 525 Good Hope, which gives each loaf a crisp, rigid crust and a "twist" that is visible all around the exterior; the new loaf weighs 20 ounces and retails on the local market for 10 cents.

Adjutant William H. Kelly announces the headquarters of the Salvation Army will be moved early next week from 111 Themis St. to 521 Good Hope St.; the new headquarters is in the frame portion of the Max Wielpuetz building.

Announcement is made of the sale of Bamby Baking Co., 533 Good Hope St., to R.J. Lewis of Anna, Ill., and of its change in name to Bunny Breads Inc.; the sale was made by Thomas Fitzgerald and his sons, Thomas Fitzgerald Jr. and O.L. Fitzgerald, who have operated Bamby for the past 20 years, having purchased the business from the Wielputz family.

September 1971: Expansion of VIP Industries becomes necessary because individuals from Ste. Genevieve and Perry counties want to give their handicapped population a chance to work at VIP Industries. The old Bamby Bakery building, 535 Good Hope, was purchased.