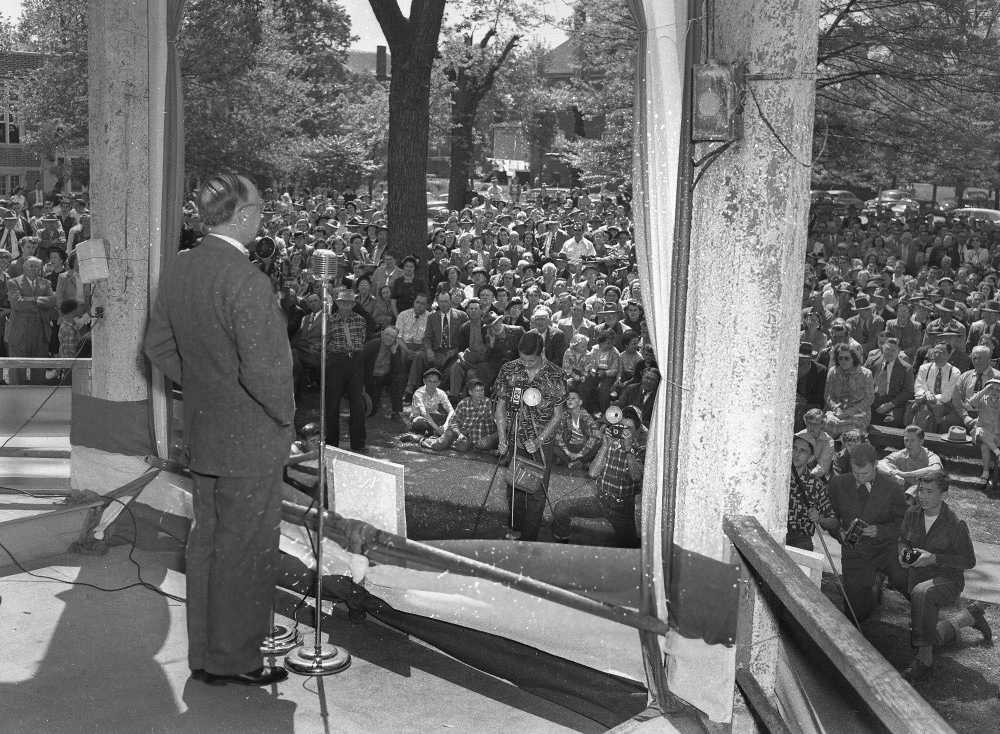 U.S. Senator Robert A. Taft of Ohio speaks to a crowd of about 1000 people at Courthouse Park in Cape Girardeau on April 26, 1952. G.D. Fronabarger took the picture of Taft, who spent an hour and 40 minutes in the city. Taft attended a luncheon for more than 150 Republican party leaders at the Hotel Marquette, spoke at the bandstand for 30 minutes and then went to Jackson for another appearance in behalf of his candidacy for the Republican presidential nomination. He spoke to about 500 people in Jackson from the front steps of the courthouse. Following the speech was the party convention in the circuit courtroom. Taft won 13 of the 14 delegates to the 10th District conclave.

Taft started his whirlwind tour of Missouri at 9 a.m. on that Saturday when he landed at the Air Force base at Malden. Taft sped to Poplar Bluff for a talk to 500 persons from the courthouse steps, then was whisked away by car to Dexter for a brief talk and then on to Cape Girardeau for arrival during the noon hour.

Questioned about a statement attributed to him that Gen. Eisenhower would be "a weak candidate," Sen. Taft said he did not say that. What he said was, he explained, that if Eisenhower follows Dewey's advice he would be a weak candidate. He was referring to Gov. Dewey of New York, the presidential standard bearer in 1948 and now backing Eisenhower.

It was Sen. Taft's second appearance in Cape Girardeau. On Oct. 8, 1940 he spoke on behalf of presidential candidate Wendell L. Wilkie. Taft died 15 months after his second visit.

Sen. Taft's father, President William Howard Taft, visited Cape Girardeau on Oct. 26, 1909 while on a cruise down the Mississippi River to New Orleans. President Taft spoke to a crowd of several thousand at Teachers College.