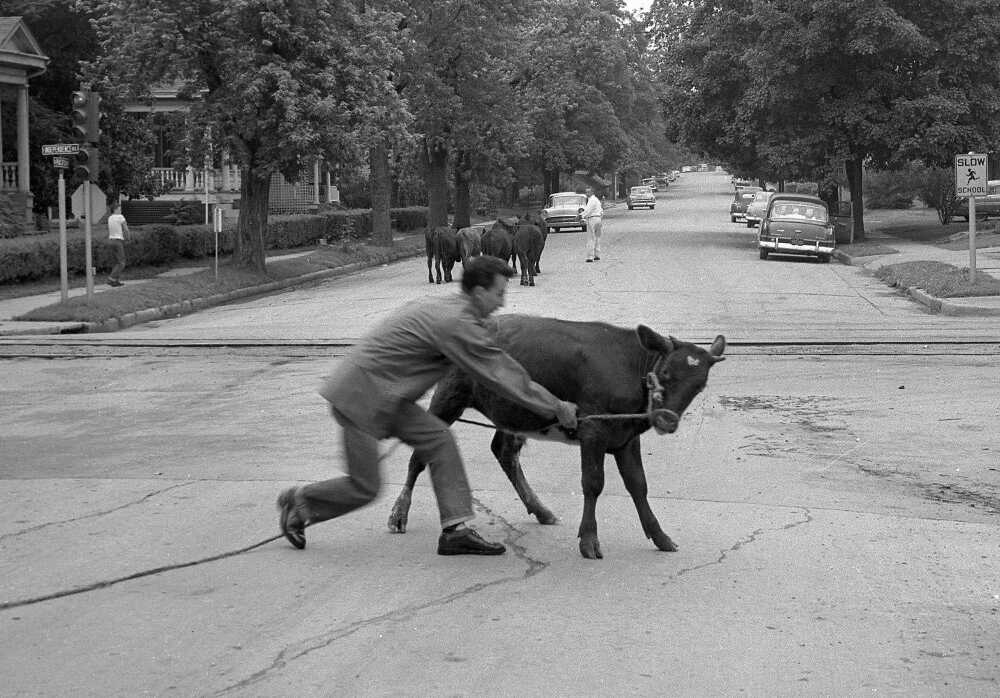 Our librarian, Sharon Sanders, has a knack for solving mystery photos.

She rounded up the details of this picture by G.D. Fronabarger.

This rebellious calf, one of several that found their way out of a field in the city's southern section and wandered into town, resented having its freedom checked and, here, is giving its captor, Monty Grimes, a real workout. He finally succeeded in making the animal see things his way, while police and volunteers rounded up the remainder of the herd. This incident was on Pacific street just north of Independence street.

Eight young steers with a bent for adventure made the southwestern part of the city open range Sunday afternoon, calling for an on-foot and automobile round-up that occupied police and volunteers for 2 1/2 hours before the ornery critters could be corralled, podnuh.

The animals, pastured at the Leon F. Brinkopf home on South Minnesota, broke down a wire fence to go out on the town. Instead of meandering down Minnesota avenue where they would be seen and could have been herded back, they took a circuitous route into residential areas that finally reached as far as the Trinity Lutheran School grounds.

Police received the first call at 2:20 o'clock. Others followed in rapid order as startled citizens in Sunday repose looked up to find a herd of cattle, though small, making like the Chisholm Trail through yards and streets.

Patrolmen Arthur Perkins and Clyde Wolters, astride Police Car No. 2 and with six-shooters holstered, were dispatched to the roundup.

They found the cattle near the Lowenbaum Mfg. Co. plant on Minnesota and trailed the animals to Pacific and Independence.

Here they found volunteer trail hands, who helped them in the last roundup, but not without a show of independence on the part of some of the animals.

The Brinkopfs were away from home at the time the steers broke loose, but Mrs. Brinkopf was located and engaged three men with a pick-up truck. With the aid of this machine and police car, the cattle were driven back to the Brinkopf pasture on South Minnesota.