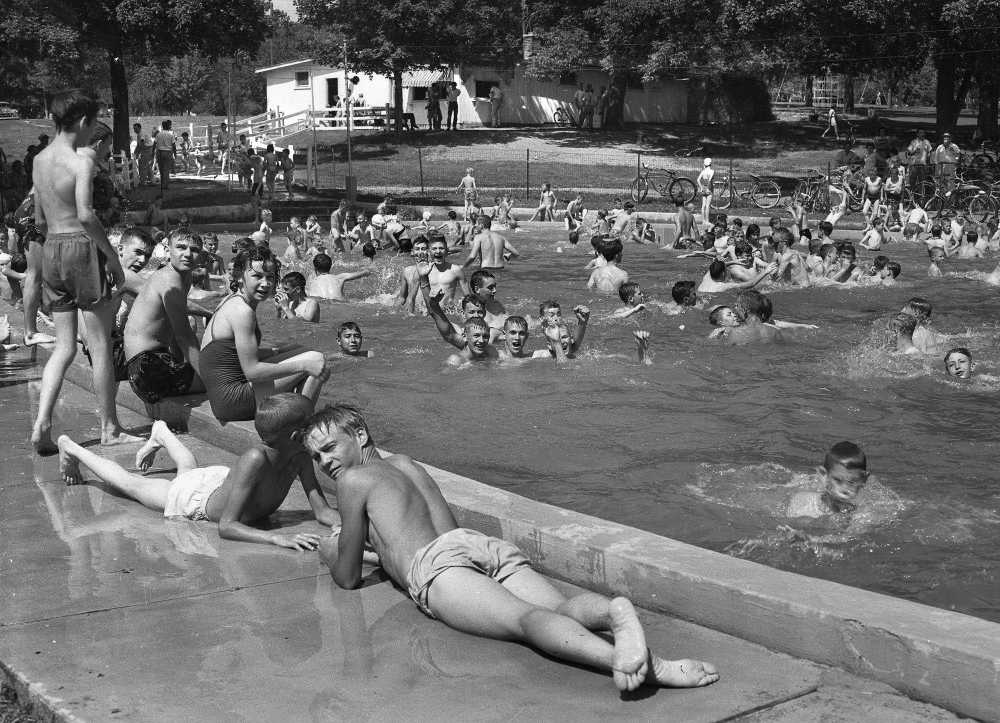 G.D. Fronabarger got lots of attention from the swimmers at the oval pool in Cape Girardeau. Note the bath house in the background on the north side of the pool.

Part of the mass of youngsters that jammed the city swimming pool in Capaha Park on opening day Friday are shown in the photograph. Park Commissioner J. Weldon McBride said the total admissions during the day were 408, with 290 boys and 118 girls paying $64.65 to swim. Opening day last year, a clear, warm Memorial Day, the pool had only 275 customers. Receipts that day were $46.75.

A new swimming pool for Cape Girardeau in Capaha Park was assured Tuesday in balloting which gave a margin of better than two to one to a proposition to issue $149,000 in city bonds to finance construction.

It was the fourth time Cape Girardeau had balloted on the pool. Each previous time the proposal had carried by a majority, but had failed to meet the two-thirds required by state law. Once it had failed by only 67 votes. Previous elections were in 1949 and last year when it twice failed.

It is expected that the pool will be located generally in the same spot as the present unused pool.

The existing pool was built in 1919 and is of the draw and fill type. It has been condemned by the State Board of Health, but was used intermittently in recent years until it was permanently taken from operation before the end of the summer last year.

Feeling out objections which defeated the issue four times previously, the Junior Chamber managed to come up with a proposed pool plan that compromised as many objections as possible and with the help of those who favored it all along were able to get the voters to the polls Tuesday to support it.

Here are pictures taken in 2010 of the oval pool site.