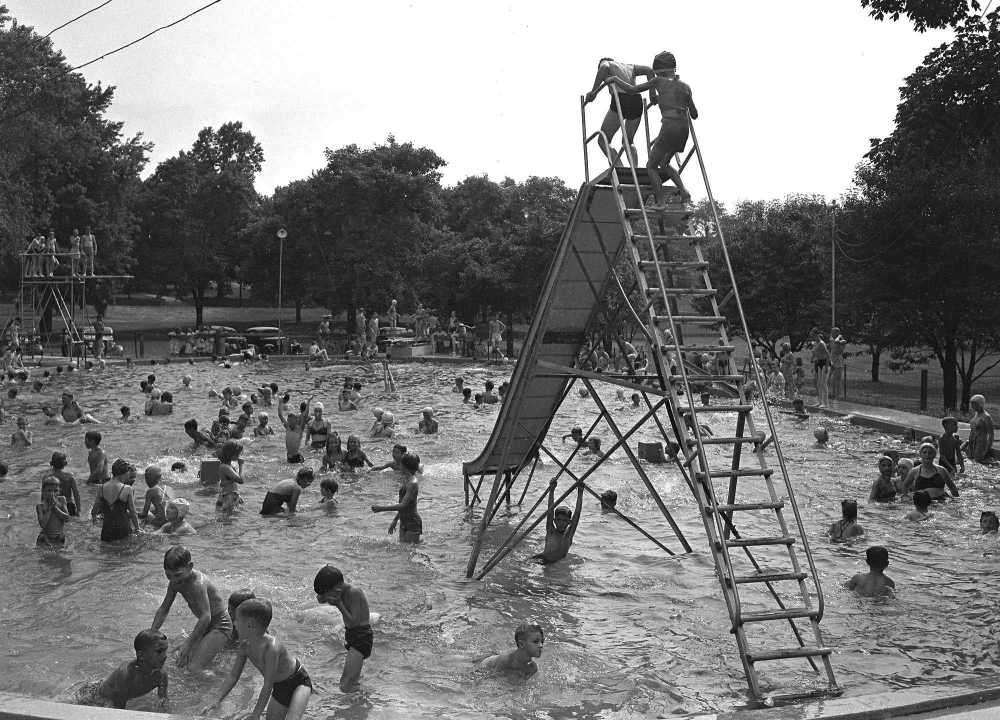 G.D. Fronabarger took this picture of the original swimming pool at Capaha Park. The photo was published July 26, 1946. At the time it was called Fairground Park.

This story was published in the Southeast Missourian May 16, 1941:

The city has ordered a slide and a new diving tower to be installed at the swimming pool, which is to be opened about June 1. The tower base will be more than nine feet high, and will be set in the concrete at the edge of the swim pool. The slide, similar to playground slides, will be 11 1/2 feet high and will be arranged so as to be used by youngsters who visit the pool.

The oval pool was closed in 1955 and replaced with a larger pool nearby in 1957.

This story was published Aug. 22, 1955 in the Southeast Missourian:

An opinion of the old swimming pool in Capaha Park, or perhaps disgruntlement over failure of last week's bond issue to pass, expressed in the forms of sticks, old tree limbs, stones, empty beer cans, paper containers and other trash--all thrown in the pool or in the nearby wading pool--today caused Park Commissioner J.W. McBride to order an abrupt end to the swimming season.

He said today that when the pool closes at 9 o'clock tonight, it will be emptied and not refilled. Earlier, until the situation got to the intolerable point, he had planned to continue opening the pool through the remainder of the season. It customarily closes on the Sunday before Labor Day.

Actually, tonight's closing is likely the death knell for the oval. The State Division of Health has strongly recommended in repeated warnings that it not be used. Numerous tests show it is a bacteria breeder and a source of infection for eye, ear, throat and intestinal disorders.

Commissioner McBride said the recent report of the state had cause attendance to dwindle to the point where it was not profitable to continue operations, but that regardless of this he had hoped to finish out the year. Even hot weather the past few days has not caused receipts, particularly at night, to pick up, he said.

Then, just after the $165,000 bond issue for a new pool failed to pass last week, the debris began to appear in the pool and the wading pool. It has become progressively worse, the park commissioner said.

The climax came the other night when someone stole the 10-foot wrench used to open the valve which lets out water in the pool. The valve is at the bottom and the wrench customarily left on until the pool is empty, then the opening is closed. Sometime during the evening and before 11 o'clock, the wrench was taken.

Commissioner McBride said conditions had gotten to the point where it was impossible to keep the pools clean, and it was felt closing would work for the best interests of all.

Here are pictures taken in 2010 of the old pool site.