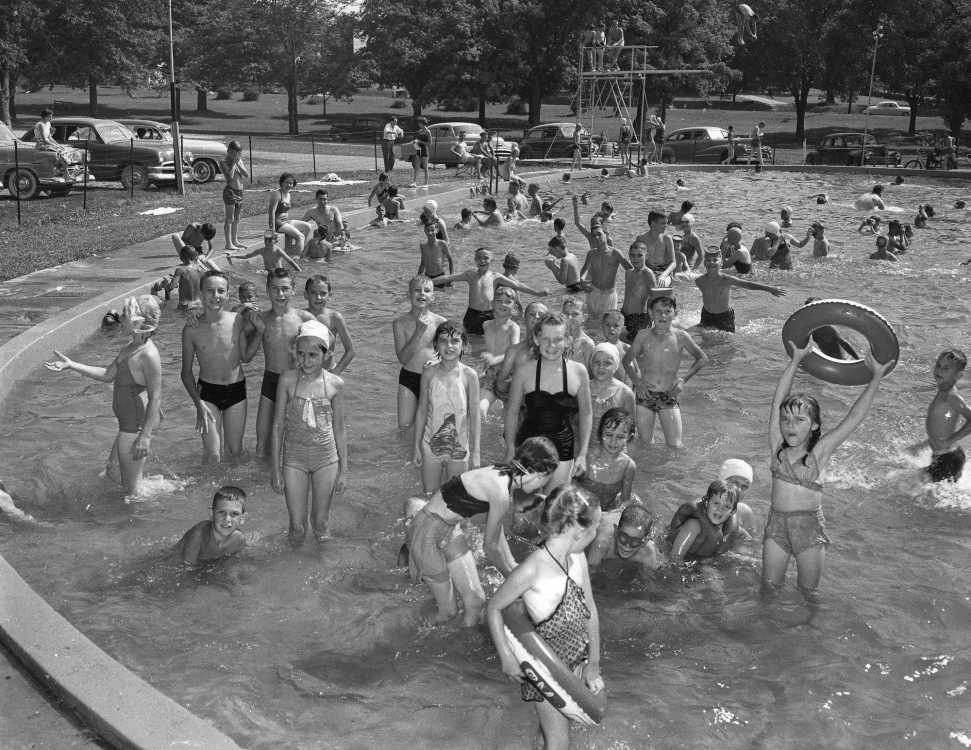 G.D. Fronabarger took this picture of Cape Girardeau's first municipal swimming pool. It was published June 29, 1954. The pool was replaced by a larger pool nearby that opened in 1957. The photo is looking to the south with Broadway in the background.

Excerpts from the July 5, 1919 Southeast Missourian:

Mayor H.H. Haas was the first adult to demonstrate that the water is deep enough for diving. Some of the kids might have remarked that the mayor made considerable noise when he hit the water, but just the same he went out of sight and was several yards distant when he came in sight again. No sooner had he plunged in than dozens of others followed.

Mayor Haas was asked if it would be necessary for women to wear stockings with their bathing suits. "I see that St. Louis makes such a requirement," the mayor remarked, "and I suppose all ladies will wear long stockings. We have made no definite rules regarding dress and are hoping that it will not be necessary. I naturally assume that all ladies will wear long stockings. Little girls will not need them. We are hoping that every man and woman who uses the pool will strive to set a good example for the children."

All adults were charged 25 cents and about 65 paid yesterday. All children under 16 will be admitted free during the afternoons but all must pay in the evenings. The city will furnish a towel and cake of soap to each bather. The attendant in charge of the dressing rooms will check the clothing and take good care of it. The shower baths will be provided. The towels must be laundered, the place must be kept scrupulously clean, the pool must be emptied and scrubbed with cleansing compound several times a week, the attendants must be paid and there will be great expense. The charge of 25 cents for adults will barely pay for the soap, towels and attendants. The city will furnish the water and guarantee any deficits, so under such circumstances the charge of 25 cents is reasonable.

Cape Girardeau's swimming pool is considerably larger than the average. When completed it will be the equal of most any and the indications are that it will prove a popular success.

Here is an editorial published on May 31, 1950 in the Southeast Missourian:

The Swimming Pool Fails to Open

It has been the custom for many years to open the city swimming pool on Memorial Day. In a way it heralded the beginning of warm weather, the end of school and the opening of the summer vacation. It has become a sort of a traditional date with us.

But, the swimming pool didn't open yesterday, and there isn't any certainty the tiny oval at the park will be opened this year at all. City officials are undecided, and there seems to have been no great demand from the community for it to be opened.

What has happened, of course, is that the State Division of Health, after a check of the pool, warned that to operate it in its present condition would be dangerous to health, and it recommended that it not be reopened to public use. The health authorities declared:

"It is the opinion of the State Division of Health that ... the defects offer sufficient hazards to the health and safety of bathers that this pool should not again be opened to the public."

In its report, made after a check asked by the city, the health agency pointed out that there were no provisions for recirculation, purification and disinfection of the water, that the bathhouse was located so far away that bathers in going from it to the pool could pick up dirt and debris, that the bottom and sides of the pool were chipped and broken, that toilets, showers, etc., were not adequate, that various features present were dangerous to those using the pool and that the intake pipes were so located that the public water supply could be contaminated by water from the pool.

In the face of that report city officials have a difficult decision to make. The community needs a swimming pool for public use, but does it need one badly enough to take the chances indicated?

It is not necessary, of course, to recall that a proposal for a bond issue to build a modern swimming pool was voted down at a special election last December, chiefly because many in favor of it didn't take the trouble to vote. The proposal was given a majority, but failed of the necessary two thirds. Only a few more votes would have been necessary to get it.

If the city decides to keep the pool closed, then Cape Girardeau will become one of the few, if not the only city of any size in the country that does not have such a recreation without the approval of the highest public health body in the state.

The decision will be a difficult one, one which city officials need, and deserve the help of the public as a whole in reaching.

Here are pictures taken in 2010 of the old pool site.