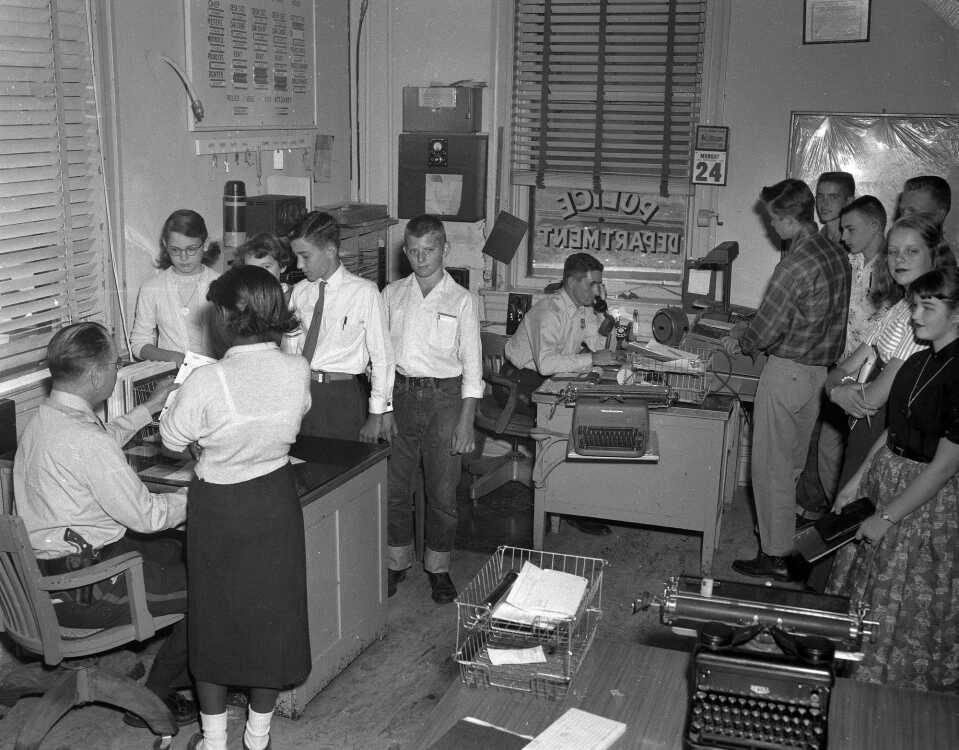 These youngsters tour the Cape Girardeau police headquarters, which was shared with Fire Station No. 1, at Independence and Frederick streets, on Sept. 24, 1956. The photo was taken by G.D. Fronabarger. A story ran the next day about the Kiwanis Club's Kids' Day program.

City government operations and a typical court trial were viewed in a demonstration for 404 pupils from eight Cape Girardeau grade schools during morning and afternoon sessions of the annual Kiwanis Club-sponsored Kids' Day program Monday.

In small groups, starting at 9:30, 12 city officials explained their functions as they made their rounds of duty.

The program was supervised by Co-chairmen Wm. Lehne and Earl Kirchhoff.

Autos were furnished by 20 members of the Kiwanis Club to assist in transporting pupils to and from the schools. The club had engaged buses from the Cape Transit Co. to also carry pupils in connection with the program.

To conclude the program, a mock trial was held in Common Pleas Court with Judge Freeland J. Jackson presiding. The courtroom was crowded with youngsters to see arguments as in a real trial and to hear a jury of Kiwanians return its verdict in an automobile damage suit.

The Cape Girardeau Police Department moved to the old Grace United Methodist Church, corner of Independence and Sprigg streets, in 1960.

In 2018, a new police station, jail and court opened at 2530 Maria Louise Lane across from Arena Park.