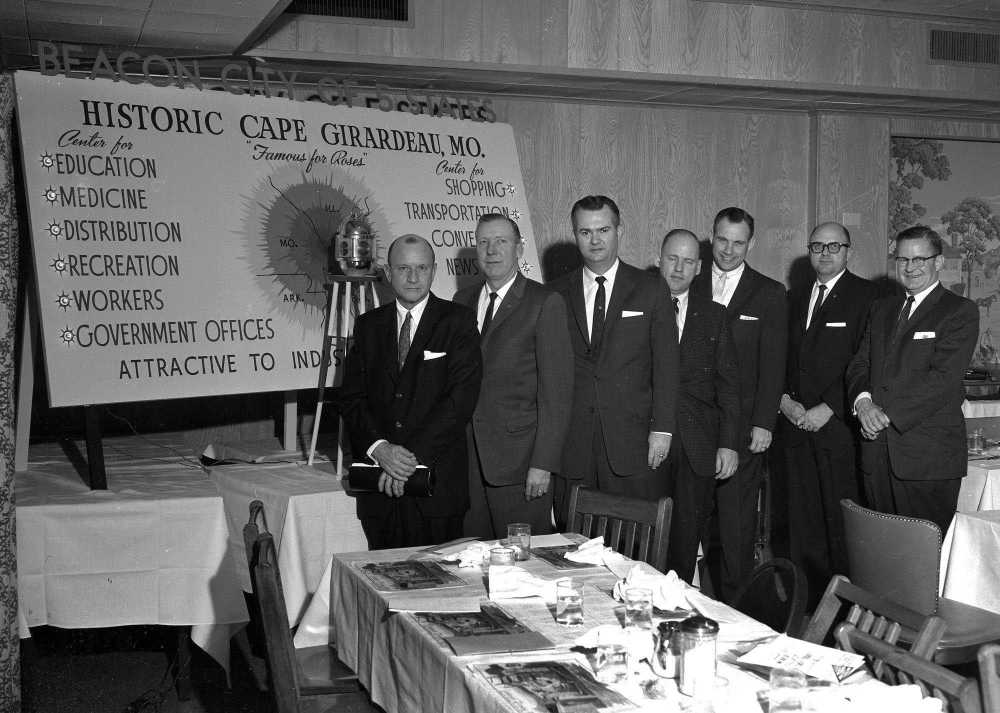 This picture was published in the Feb. 28, 1961 issue of the Southeast Missourian.

The story which follows was published three months earlier than the picture which G.D. Fronabarger took at the Chamber's annual meeting in 1961.

Cape Girardeau's Chamber of Commerce shows an illustration of its programmed work for the current year, this big board spotlighting the community as a Beacon City of Five States. Shown at its annual meeting Saturday night, from the left, are James D. Idol, director of the Missouri Resources and Development Commission; Francis Lewis of the Chamber's program committee; Robert Earley, president; Harry Naeter, who has secured the Missouri School of Journalism's photo workshop for Cape Girardeau and which will give the city wide recognition; Stephen N. Limbaugh, retiring president; Luther Hahs, master of ceremonies, and Allen Robinson, Chamber manager.

Every citizen of Cape Girardeau can be a salesman on its behalf through use of a billfold-size card crammed with facts and figures about the city and its assets published and made available by the Chamber of Commerce.

Allen Robinson, secretary-manager, said 50,000 of the cards have been printed. He urged residents of the city to call at the Chamber for a supply of the cards and suggested firms might wish to include one with each mailing.

"Every community has a problem of properly informing tourists," Mr. Robinson said, adding that this was a particular reason the concise cataloging of city assets was drafted and sent to the printer.

He recalled the recent instance of the Topeka, Kan. man and his wife who said they stopped in Cape Girardeau and were told by a filling station attendant, asked if there were community attractions, that he didn't know of anything to see, that he "thought it was a pretty dead town."

The couple then saw the Golden Eagles Marching Band on television and expressed regret that they hadn't been told of the college and of other community assets, Mr. Robinson recalled.

"It is this sort of thing that we hope to combat," he explained. "With these cards there is no reason why every resident cannot become a salesman for the city."

He noted that service station employees and waitresses are among the most important groups who can sell a community because they are constantly in touch with the traveling public.

He noted that the situation described by the Kansas man would not apply to Cape Girardeau alone, but was a common one with all cities.