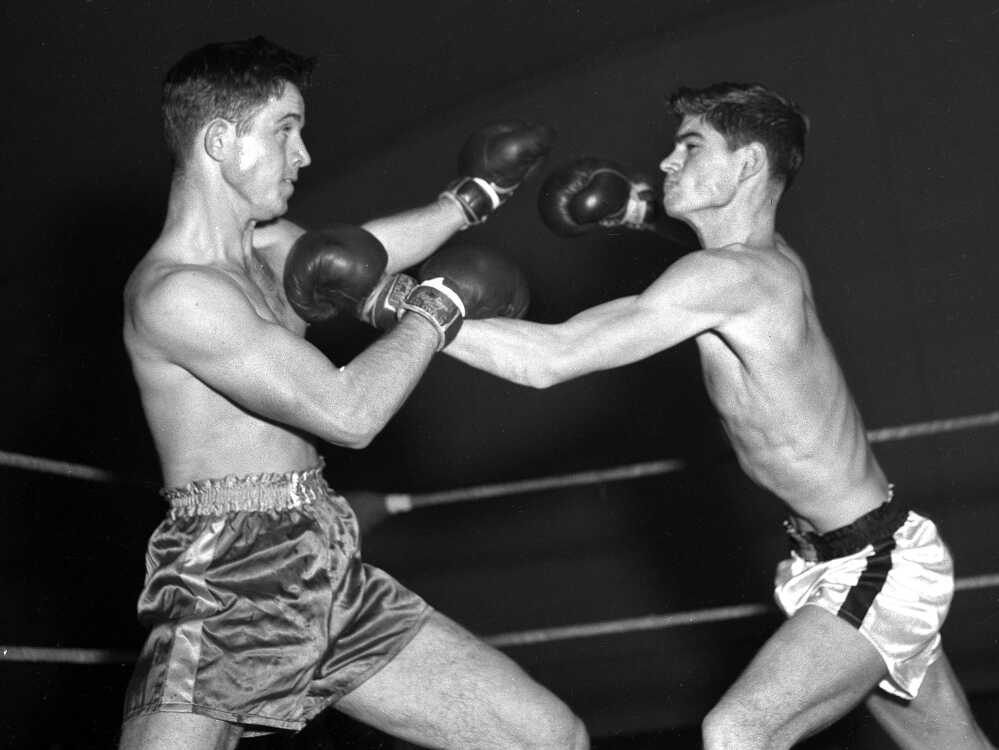 Golden Gloves boxing was big in Cape Girardeau during the 1940s and 1950s, and G.D. Fronabarger covered the action at the Arena Building.

This picture appeared in the Southeast Missourian, Jan. 13, 1955. Doug Dunker left, a college student from Perryville, trades punches with Stan Shanks of Sikeston. Dunker scored a split decision over Shanks.

A crowd estimated at 1100 persons, including 921 who paid admission, attended the opening session of the second Golden Gloves boxing tournament staged Monday night at the new fairground Arena Building under sponsorship of the Junior Chamber of Commerce.

Eleven bouts were staged, eight to a decision and three technical knockouts. The second night of the district preliminaries will be held Wednesday night.

The Delta CCC camp was represented in eight of the 11 bouts and was victorious in six of them, winning two via technical knockouts. Ben Gines of Cape Girardeau acted as referee, with Al Nenninger, Clarence Koch and Dale Reed as judges and Eddie Clinton as timer.

Eight of the bouts went the full route of three two-minute rounds, while two went only in the first round and one was stopped in the second round by Referee Gines.

In a bantamweight bout in the open division, Paul Dare of Cape gained a three round decision over Vincent Clark of Chaffee. Each weighed 119 pounds. The first round saw both start at each other as if they meant to get a knockout right off the start. Dare got in two damaging rights and lefts and then both seemed to let up, which brought a warning from Referee Gines. Clark sent Dare down for a short count and then Clark also went down for the short count. Dare got in a good left to the face. In the second round they exchanged rights and lefts with little damage. The third round saw an exchange, with Clark landing a solid left to Dare's face. Dare seemed to be bothered by Clark's left, at the close of the round, Clark was pouring in rights and lefts with Dare covering up and no damage being done.

Vernon Tate and Ed Godwin, both of Delta, staged a mild battle which brought forth boos from the crowd because both appeared to be pulling their punches. After three rounds, Tate was given the decision. The bout was in the middleweight class of the novice division.