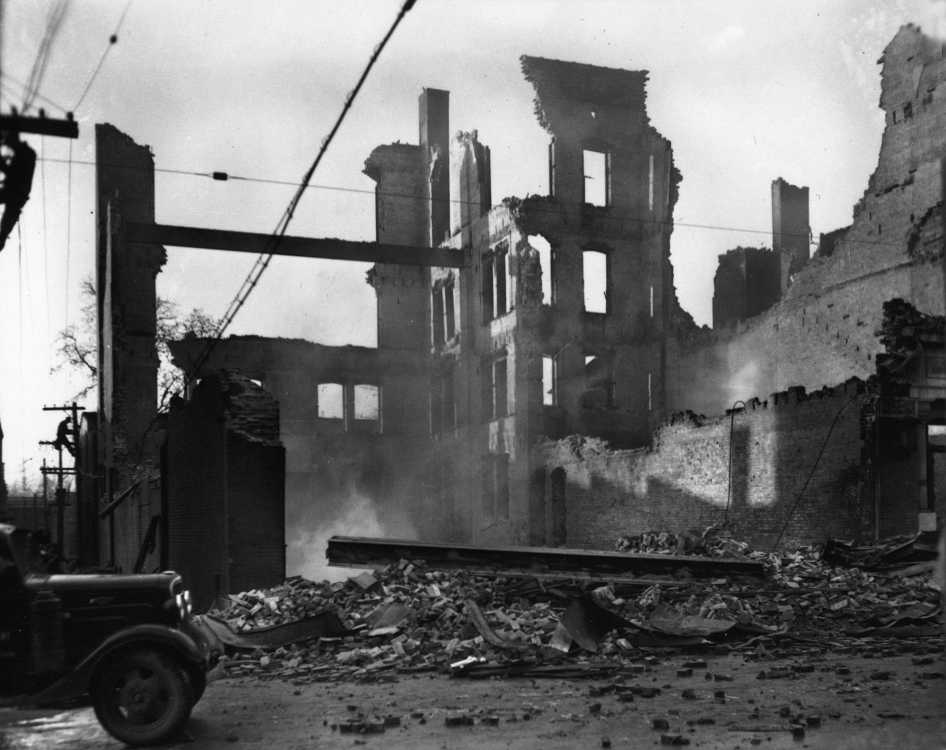 The Elks Building fire aftermath is one of the earliest pictures that G.D. Fronabarger took during his career at the Southeast Missourian. The building burned on the night of Nov. 28, 1938.

Here is a picture of the building before the fire.

Here are current pictures of the site at 115 Themis.

The fire destroyed the 31-year-old, four-story Elks Building on lower Themis Street, just west of the St. Charles Hotel. Also gutted was the adjoining structure on the west -- Mrs. Ollie "Ma" Kopper's combination rooming and boarding house. The St. Charles, separated from the burning building by only a narrow alley, was threatened several times, but was saved by the heroic work of the firemen.

The blaze was roaring out of control by the time city firefighters arrived at the scene at 10:20 p.m. Mayor Edward L. Drum called in the fire departments from Chaffee and Jackson, as it appeared the downtown business district was threatened. For two hours firemen fought the blaze before it was brought under control.

At the time of the fire, the building was no longer owned by the Elks Club. The lodge had folded by that time, having defaulted several years before on $25,000 of bonds issued to build the structure.

When it was dedicated April 16, 1907, the Elks had proudly claimed the building to be thoroughly modern and fireproof.

Missouri Utilities officials estimated that approximately 750,000 gallons of water were pumped on the downtown fire Monday night. This was about seven times the amount of water used Feb. 4, 1937 in connection with the Bartels store fire, more lines of hose being used.

With the burning of the Elks Building Monday night, one of the early modern buildings of Cape Girardeau, with a colorful existence during it height of popularity, passed into history. The four-story building, a gigantic undertaking for the city 31 years ago, was at one time the most pretentious and elaborately furnished structure in Southeast Missouri.

It was on April 16, 1907, the Cape Girardeau B.P.O. Elks dedicated their new $50,000 building with a whirl of activities that took two days to complete and one day afterwards generally figured to dispell the effects.

Dedication of the building started at 2 p.m. Tuesday, with a parade from the old meeting rooms on the second floor of the Masonic building, at the corner of Broadway and Spanish streets. Three hundred Elks were in the line of march headed by the exalted ruler, Rodney G. Whitelaw, who marched up to the doors of the new building, unlocked the latch, and bade the members and visitors to enter.

At the time, the Cape Girardeau club had 275 members and the old Schuchert band blared along with them in the parade. Upon admittance to the building, the entire ranks were led to the fourth floor by way of the electric elevator and the ritualistic services got under way. Edwin F. Pueller, outstanding Missouri Elk and a St. Louis lawyer, delivered the oration.

On into the night the services continued, and the second day's activities followed without a break. The ball Tuesday evening was a thing of brilliance for the city at the time. Nothing had been left undone, and the matrons and young ladies of the city had worked for months ahead in preparation of the event.

A St. Louis orchestra was hired for the occasion, and a group of St. Louis caterers serviced the banquet that evening.

Wednesday the wives and daughters of Elks held a reception in the parlors and ballroom, and that evening at 8 o'clock the first regular meeting in the new building was held.

The first President Roosevelt was the subject of discussion when the Elks held their smoker following that first meeting, when a large class was initiated into the brotherhood. At the smoker the St. Louis caterers were again pressed into service to appease the whims of the members.

At the height of dedicatory services, the grand exalted ruler in California at the time, sent a telegram congratulating the Elks on their new achievement. Also W.H. Miller presented to August Vogelsang a diamond studded watch for his services as contractor of the building. Today Mr. Vogelsang, who now runs an ice plant at Illmo, said that the watch, a 21 jewel Hamilton make, still runs perfectly and he carries it every day.

The celebration lasted until way after midnight and then some of the members took it upon themselves to induce a few of the orchestra players to accompany them in serenading every section of the city.

It was late Thursday morning, according to accounts given in the paper about the events, before any of the Elks put in their appearance downtown.

Exalted ruler Thomas Pryor of Cairo visited the festivities and that night remarked that he was so pleased with the Cape club that he hated to return home.

Lavish and expensive gifts were showered on the club rooms to provide a more homelike and luxurious atmosphere, if it were possible.

The building, four floors and basement, was built entirely for club purposes. In excellence and luxuriousness it was unparallelled in Southeast Missouri. The first floor was divided into divisions for a cafe and buffet. Dumb elevators connected with other floors to service private dining rooms, of which there were several.

The third floor contained the ballroom, which measured 42 by 54 feet, was the largest in the city by far. The ladies' parlor, two private dining rooms, cloak room and serving rooms were also on this floor, which was finished in Flemish oak.

The top floor contained the lodge room, and only members could trod in its sanctum. The room was the same size as the ball room, directly under it, and was covered with a green velvet rug. Leather-covered benches lined the walls and the officers' chairs on the rostrum at one end of the room were unsurpassed in extravagance. Light fixtures were of old English design finished in dull brass.

Also on the top floor for private use of members were three sleeping rooms, bath room, waiting rooms, paraphernalia rooms and cloak rooms.

In the basement were the kitchen, pantries, store rooms and machinery. The building had an electric elevator, one of the first in Cape Girardeau, and gave to any visitor the aspect of one of the expensive club buildings to be found in any large city.

Gay times continued in the building for many years, even down to little more than a decade ago, until the lodge itself began to slump in membership. Considerable internal dissension arose over the nature of some affairs held in the building. Finally the lodge was dissolved and the bonds of the building went unpaid. Later when a new lodge was formed, it did not assume liability for the old building.

Up until the early '20s the building remained the central meeting place for the community and gala dances were frequent features. The newly organized American Legion post met there for a few years, later it was utilized by the Salvation Army and by other businesses, most of them brief in their duration in the community.

Small fires in the building have been numerous, firemen being called on a number of occasions to extinguish a blaze in rubbish or the like. Harry Rabe, a veteran firefighter, recalled battling flames in lower rooms on the building on two or three occasions in fairly recent years.

Socially the building also fell into disuse as the Country Club was built and other private dance places were established. So, its demise, marking as it does, the end of another milestone in Cape Girardeau history, will not be felt so keenly as it would have two decades ago.

Located at the site today are Jayson Jewelers and Ervin's Metalsmiths at 115 Themis.

The cornerstone and the stone door surround are all that remain from the Elks building.