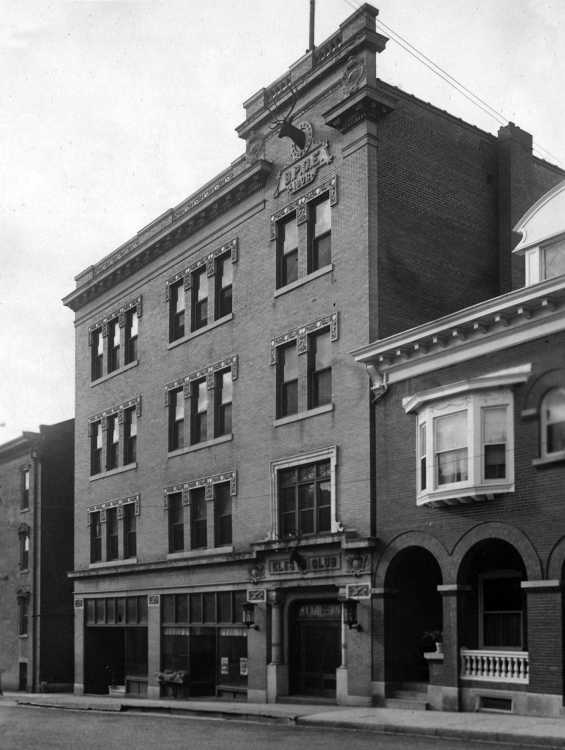 Members of the Elks Club voted to construct a new, four-story club house in January, 1906. August Vogelsang built the brick structure at a cost of $42,000, which included the price of the lot. It was formally opened April 16, 1907.

In 1924, however, a receiver was appointed to handle the sale of the building, because the Elks Club could not pay off bonds of $25,000, taxes and interest. The building was sold in 1925 and by 1938, when it burned, it was used mainly for storage.

Cape Elk Lodge is No More;

Dr. Carroll Smith, district deputy, came to Cape Girardeau and took the charter and ritual of the order away with him, under direction of the grand exalted ruler.

The big building, now occupied by the Elks, the Chamber of Commerce, the Rotary Club, the Lions Club and other organizations, remains in the hands of the realty committee, but it will probably be sold to satisfy the bond holders.

Dr. W.C. Patton, exalted ruler, today told The Missourian that the demise of the once popular lodge was due to gambling and vice.

Gamblers had the upper hand for several years and consequently the inevitable came, Dr. Patton said. So bold did this element get, the doctor stated, that the treasurer of the lodge posted on the wall a detailed financial statement showing that the "rake off" from the gambling tables, both poker and craps, amounted to more than $3000.

The gamblers contended that the rake off from gambling would meet all the obligations of the lodge and put it on easy street, Dr. Patton said, but when he was able to get in control he immediately cut out the gambling and then the trouble started.

He says he made it so hot for the gamblers that they cleared out, but they immediately set about to get the grand lodge officials to investigate, and as the investigation showed strong friction, and as it appeared impossible to get the two elements in harmony, the grand exalted ruler ordered the charter taken up, the doctor said.

It is reported that efforts will be made at once to get a new charter. Dr. Patton said he had heard such reports but had no definite information.

Click this link for current pictures of the site at 115 Themis.