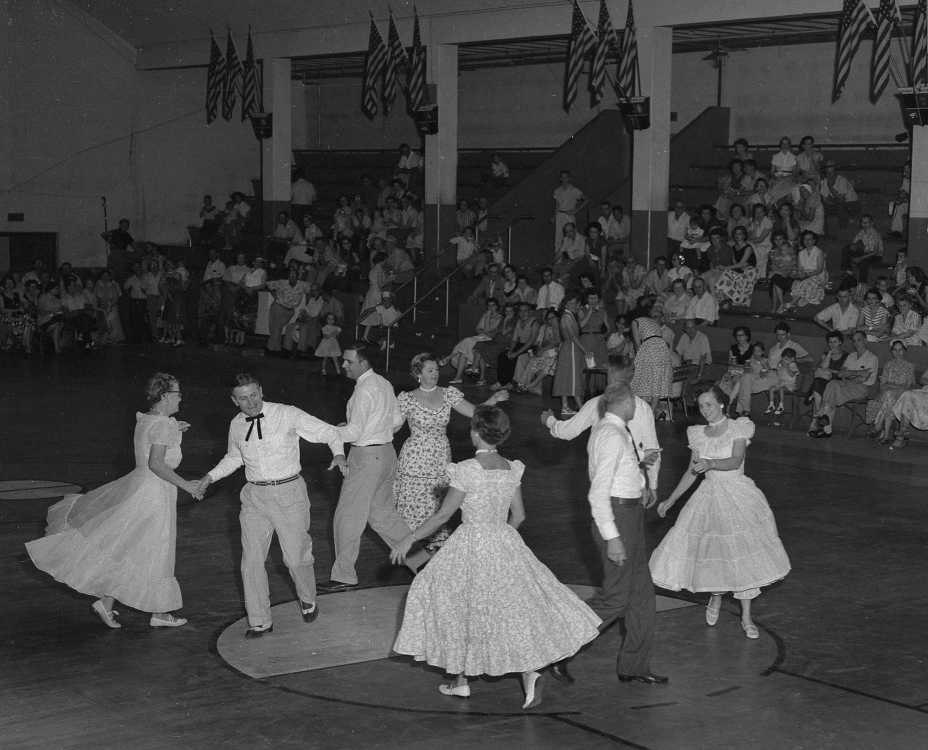 Square dancing at the Arena Building, perhaps during the 1950s, was photographed by G.D. Fronabarger.

It might have been at a square dance carnival, such as this one in a Jan. 4, 1952 story in the Southeast Missourian:

Plans were announced today by the Cape Girardeau Circle Four Square Dance Club for a square dance carnival at the Arena Building at 8 o'clock Thursday night. Square dancers from throughout the district have been invited to attend the affair.

Music will be by Red Ervin and his square dance band and callers will include Clyde Clark, Vernon Auer, Bob Kirkpatrick, Lee Roy Friday, Leslie Hartsock and Oliver Hope. Arrangements for the dance have been made by a committee headed by Dr. James S. Pickens. Admission will be $1 per couple and 25 cents for spectators, it was stated.

Here is another, from March 16, 1956 Southeast Missourian:

Twenty-five squares, or 200 persons, participated in the annual Square Dance Festival held Sunday afternoon at the Arena Building. In addition there were many spectators who did not participate in the dancing. Calling was by Les Gotcher.

Thirty-two towns in five states were represented in the dancing, the best representation since the festival started.

After the afternoon session and Gotcher's departure, many of the squares returned for a two-hour night session at which Norman Harwell and callers from Illinois were in charge. The festival was sponsored by the Alamander Square Dance Club.

Judy Sneathen responds with identification of most of the square dancers:

"My parents, Julius and Jerry Cook are in this picture, together with Harold and Carol Rudert. Also recognize Mabel Greer and would assume one of the men would be her husband, Harold Greer.