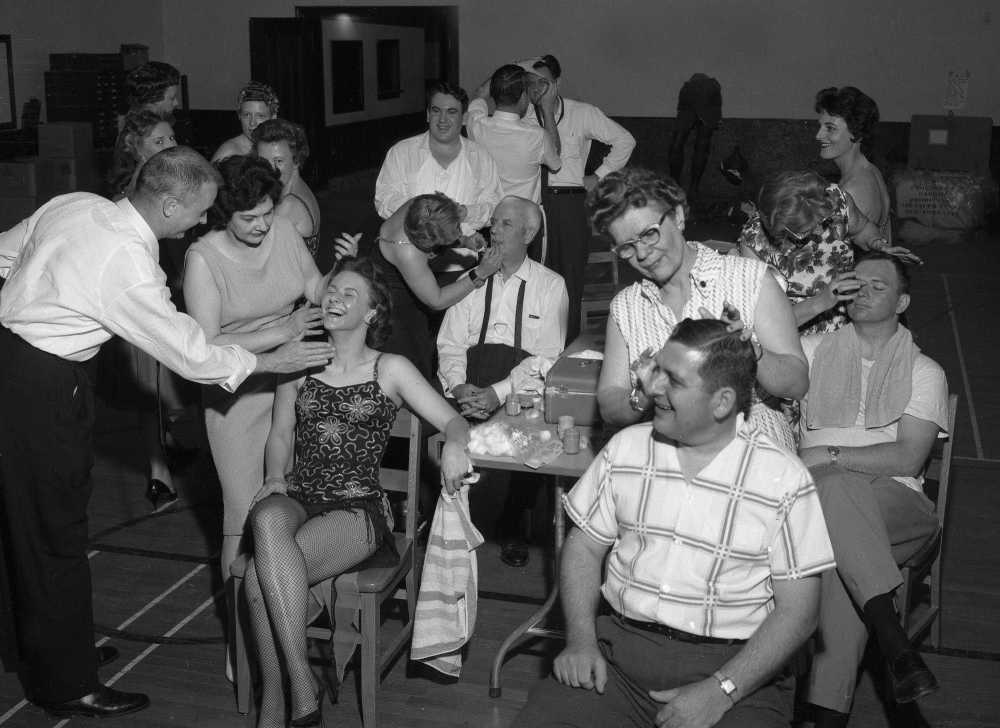 Many remember the Jaycee Follies which ended its run in 1982.

Fewer may remember that the variety show was presented for three years prior by the Cape Girardeau Kiwanis Club.

G.D. Fronabarger took this picture of follies cast members getting makeup applied. We believe it was during a Kiwanis Club production of the show in 1961, '62 or '63.

A story published May 8, 1961 in the Southeast Missourian looks at the Kiwanis Club's service record since 1942. Excerpt:

The club's service programs were reviewed by Wm. F. Rader, general chairman of the organization's forthcoming variety show. The show will be presented May 25 and 26 at State College auditorium in an effort to raise funds to enlarge the club's long community activities projects.

The follies is being directed by a long experienced director who has started rehearsal quarters for a cast of over 100 for the two-day production.

The 1962 Kiwanis Fabulous Follies was presented May 11 and 12, 1962 at Academic Hall auditorium at State College. Excerpt from May 9, 1962 Southeast Missourian story:

Made up of a cast of 65 persons, all local talent embodying the dramatic skills of Cape Girardeau residents from all walks of life, the big musical has been developed in three weeks of intensive training under the direction of Frank Moon of New York. There are professional men, such as attorneys and physicians, newspaper reporters, bankers, teachers, secretaries, also merchants, housewives, electricians and many from the varied world of occupations.

The final year of the Kiwanis Club Fabulous Follies was presented March 29 and 30, 1963 at the Central High School auditorium.

The follies was started by the Benton and Clio Literary Societies at Teachers College in Cape Girardeau, later to become Southeast Missouri State University. An archive search found the Benton-Clio Follies existed as early as 1939.

This story was published in the Southeast Missourian, Nov. 26, 1963:

Proceeds of next February's "Jaycee Follies" will be given to the sponsoring Cape Girardeau Junior Chamber of Commerce's youth activity fund.

Chairman Gary Rust and Carl Scheibal made the announcement at a meeting recently of the planning committee for the local talent show. Anyone in the community is eligible to try out for a position in the musical-variety presentation.

The Jaycee Follies will officially start Jan. 21 with a "Meet the Director" party at the Arena Building. At that time all interested persons in the city and Jaycees will meet the professional director who will organize and supervise the talent variety show set for Feb. 7 and 8. Any local resident with talent is invited to participate in the show.

The show in 1964 was presented in the Central High School auditorium.

A Southeast Missourian story from Jan. 29, 1942 announced that 25 percent of the proceeds from the Benton-Clio Follies would be turned over to war relief.

No parking fees--no meters to slug--if you park your "kids" with our baby sitters at State College Friday, Jan. 21, while enjoying the Benton-Clio Follies of 1949. Admission 60 cents. 8 p.m.

By 1962, the Benton-Clio Follies had dissolved and another campus organization started a variety show, Phi Mu Alpha's All Campus Review. Excerpt from a review in the Southeast Missourian, Feb. 9, 1962:

"The professional music fraternity hopes to make this two-night stand an annual event, and we certainly second the motion. Emceed by Fred Goodwin, the variety show was boffo from downbeat to finale. Its 15 "spots" ranging from hillbilly to classic, with way-stops for twirlers, dancers, comics, singers--you name it....

"The acts were the best of many musical talents to be found on campus. Though sans skits, the Review was reminiscent of what not-so-old-timers remember as the "tops" of the old Benton-Clio Follies."

This story by Richard Cason was published in the Southeast Missourian, Oct. 23, 2009:

Once a year, from 1962 to 1982, the Cape Girardeau Jaycees would team up with some of the community's best musicians, singers and cutups for the Jaycee Follies.

The Follies was a variety show that raised money for various community projects. On Oct. 30, 2009, the Cape River Heritage Museum will host a public reception for the cast and crew of the Jaycee Follies, as part of the "Jerry Ford's 50 Years of Music" celebration.

"This whole thing started as the Benton/Clio Follies, and it was put on by one of the fraternities and one of the sororities," said Jerry Ford, who provided music for the Follies.

"Then around '62, the Cape Jaycees took over the show. A New York producer would come to town with scripts, gags and sets and would just whip everyone into shape. With all the skits and dance numbers, it really was like the old 'Carol Burnett Show.' I was in the pit providing music, but I will always remember Millie Limbaugh, Rush Limbaugh's mother, and Mary Frances Kinder, Lt. Gov. Peter Kinder's mother, singing as a duet, and they always tore the house down."

Ford said the warm-ups before the show were chaotic, with people on roller skates, actors who acted drunk and people dressed up as small girls with giant lollipops.

"I just remember loving the rehearsals and practicing," said J.J. Edmonds, a Jaycee who started with the Follies in late 1969. "We all knew that we, the cast and crew, weren't professionals, and that was what made it fun for everybody."

During his run with the show, Edmonds cut a rug dancing the cha-cha and the jitterbug, and he would sing selections from Bobby Darin or Frank Sinatra.

One year, Edmonds said, "We were going to go three nights at the auditorium, which seated about 930. Not only did we go three nights, but they had to provide extra seating and we raised a heck of a lot of money that year."

Larry Essner, executive director of the Community Counseling Center Foundation and a member of the reunion committee for the Follies, said after expenses, the show raised around $3,000 to $4,000, making it one of the group's largest fundraisers each year.

"Most of the money that the Jaycees earned went into playground equipment in the various parks around town," Essner said in an e-mail. "We would also buy toys for Operation Santa Claus before it was Toybox."

The reception begins at 6 p.m. at the Cape River Heritage Museum. Tickets are $5 in advance or $7 at the door. The evening will be decidedly more low-key than the old shows but no less special; the Jerry Ford Combo along with those who took part in the Follies will perform some of the more memorable musical numbers of the show's run and swap stories about the past.

"The thing that made it unique, it seemed like the whole town was involved," Ford said. "All these wonderful entertainers, housewives who became chorus girls, carpenters who built the sets and so on."

The 1963 Kiwanis Fabulous Follies is featured in this blog.