Cape Chamber "Round Up" 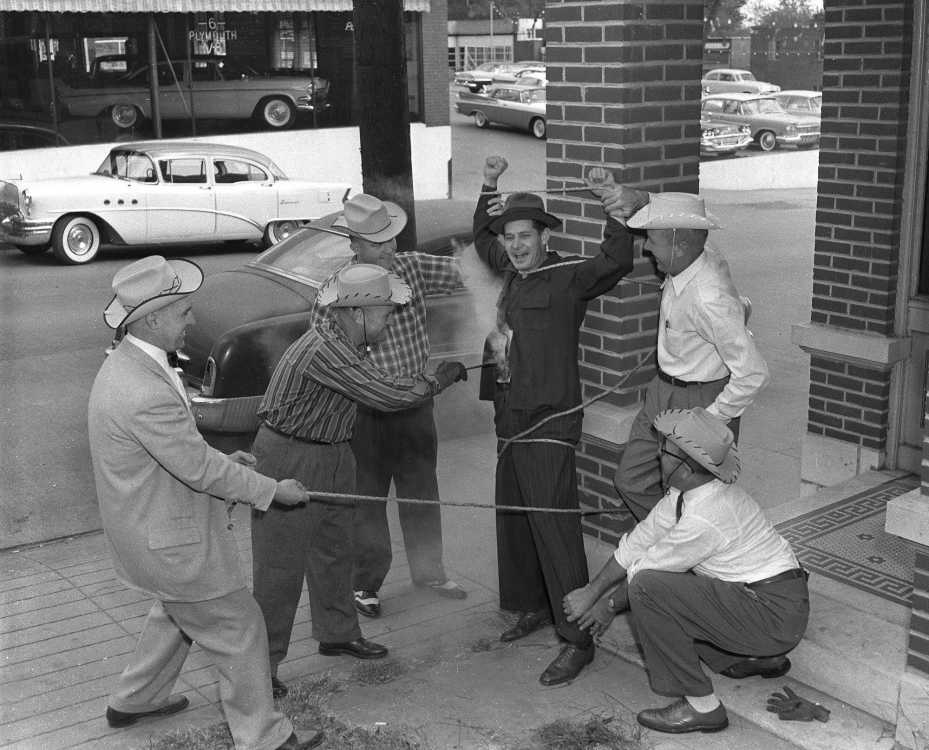 It's round-up time in the Chamber of Commerce, and this "maverick," Harry Siemers, just recently a member, is "branded" with the C-bar-C brand by President Howard Boyd. In a one-day campaign next week, other "mavericks," now non-members of the Chamber, will be urged to join the organization. Participating in this realistic branding of Mr. Siemers, with smoke pouring from a searing skin, are some members of the round-up crew. From left are manager Phil Kearney, Mr. Boyd, Wendell Black, leader of one of the membership teams; Mr. Siemers, Francis Lewis, membership drive chairman, and Luther Hahs, Chamber vice president and a team captain. (Photo by G.D. Fronabarger)

Chamber to Have Round-Up

A one-day round-up of new members for the Chamber of Commerce will be conducted Wednesday with seven teams of 10 members, each out to put the chamber's brand on all non-member "mavericks."

Francis Lewis is the chief wrangler for the outfit and will launch the whirlwind drive at a round-up breakfast Wednesday at 7 o'clock at Schneider's.

The day will conclude with a chuck wagon barbecue at the Horseshoe Bend Fishing club for all new members and for the participating teams.

Teams will call in pairs on prospective members during the day. These pairs will be responsible for getting all members they sign to the chuck wagon barbecue.

Whenever a new member is signed, the team goes to the Chamber of Commerce Building to try for a prize. There they will find balloons on a board, each containing a certificate. They may choose the balloon they wish to break.

Also included are eight tickets to a St. Louis Hawk professional basketball game for the season which starts later this month. Cape Central Airways will fly the winners to the game. Other tickets are for the Cape State-Springfield game.

The Chamber of Commerce building was next to First Presbyterian Church. Read about its history in this blog: