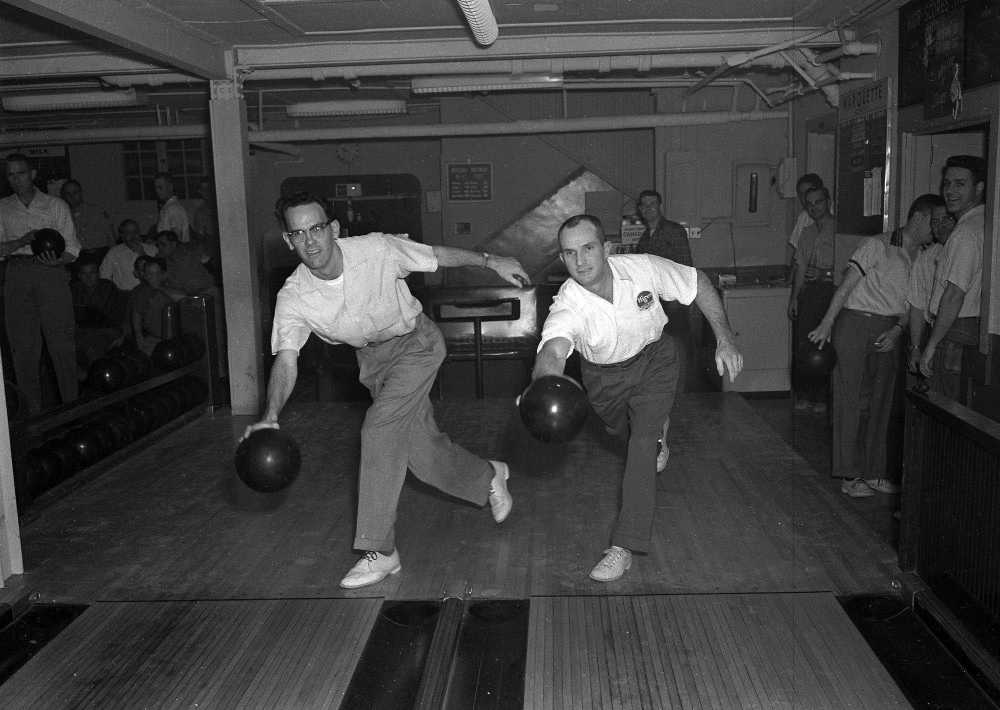 Blog readers identified the bowlers in this picture taken by G.D. Fronabarger.

Russell "Sunny" Young, left, and Clyde Huff are shown after they captured first place in the Missouri State bowling doubles tournament at St. Louis in December, 1957. Huff rolled 698 and Young 681.

The picture was taken at the Knights of Columbus lanes in Cape Girardeau. It was published in the Southeast Missourian on Dec. 6, 1957.

Our librarian, Sharon Sanders, found these city briefs in the Southeast Missourian archive:

IMPROVED--The Knights of Columbus bowling alleys opened Monday night under the supervision of Johnny Hunze with a large number of bowlers present. The six alleys have been reconditioned and the interior decorated. A new electric foul detector has been installed and all the seats have been upholstered. Bowlers this season will be unable to see the pin boys or the racks which are hidden by a partition dropping from the ceiling just behind the pins. The alleys are open each night of the week and Saturday and Sunday afternoons. Plans are later to have them open each afternoon during the week.

With the opening of the new Knights of Columbus bowling alleys, this sport has taken a new grip in Cape Girardeau, giving the city two alleys, the other being the Trinity Lutheran. Between these two alleys there are eight leagues with over 100 bowlers participating. The leagues are, League A and League B of the Knights of Columbus, Marquette, Trinity Lutheran, Classic, Junior Chamber of Commerce, Shoe Factory and Industrial for the men, and then a league for women has been formed. Bowling is held each night of the week with the exception of Saturday and Sunday.

T. Sewell and A. Maxwell plan to open a first-class restaurant at the Broadway saloon and bowling alleys this week, which means another addition to growing Broadway; Maxwell, an experienced restaurateur, will have charge of the business.

Before a large crowd at the Broadway Bowling alleys, which are managed by the genial William Oberheide, the strong team from Doe Run, Mo., which came here to attend the fair, defeats the home club in straight games.

The Broadway bowling alleys are open and are in excellent shape; these are the finest alleys in Southeast Missouri.

The first bowling contest of the season took place at the Broadway alleys last night, the brewers and bottlers of the Cape Brewery meeting to settle bragging rights; the bottlers -- H. Herbst, Al Kimmick, E. Heneke, W. Henninger and Sam Kimmick -- came out on top.

The Cape Box Ball Bowling Co. opened its new hall in the Elks building on Themis Street last night; this is high-class entertainment for ladies as well as gentlemen.

Dale Reed and Vivian Dyer, two popular young Cape Girardeau men, have leased vacant room next door to Gockel's Pharmacy on Broadway, in which they will operate barber shop, poolroom and bowling alley.

Renfro Gibbs is Cape Girardeau's bowling champion for season of 1919-20; finishing City League season, which ends this week, with average of 177 and owner of best score for three games bowled in league series, Gibbs has been presented with silver bowling trophy, offered by jeweler F.H. Kassel, and also carried off handsome gold watch fob for rolling three highest games in league match.

Club rooms in downtown district for cadets of Harris Air Field will soon be established and will be under direction of cadets for their own enjoyment; large quarters on second floor of Andy Juden building at 113-15 Themis, main floor of which is used by Playdium bowling alleys, have been made available for cadets' use, and are being remodeled.

William A. Shivelbine has purchased Playdium, a bowling establishment at 115 Themis from Margaret Green, wife of late Bill Green, former owner; Shivelbine plans to retain his work as band instructor at Central High School, his agency for Northwestern Mutual Life Insurance Co., and keep his post as director of municipal band; building was constructed five years ago by C.A. Juden.

Approval has been given by 10th Air Force, headquartered at Selfridge Air Force Base, Mich., for Voluntary Air Reserve squadron here to occupy second floor above Pladium bowling alleys on lower Themis Street.

Pladium bowling alleys, which have been located at 115 Themis street for past 11 years, have been moved to Mayfield, Ky., by owner, Clarence Hanebrink; alleys were opened in 1941 by Albert Smith and late Bill Green; they continued operate alleys until about 1946, when late William Shivelbine bought them; he had them for only a short time when Hanebrink took over operation; Cape Girardeau now has only two alleys Trinity Lutheran and Knights of Columbus.

Bids are being sought for the construction of a $200,000 two-wing addition to the Trinity Lutheran School building, 55 N. Pacific St.; the bids will be opened Feb. 17, and if one is approved, it is hoped that construction can be started by April 1; the expansion will give the school nine additional classrooms, a new assembly room, a bowling alley and free space in the present structure for other purposes, including a cafeteria, expanded office space and Sunday School rooms.

In new quarters in the north addition to the Trinity Lutheran School plant, the Lutheran bowling alleys will be opened formally to the public on Jan. 1; operated for years by the Men's Club of the church, the first set of two alleys was installed in 1925.

Two new additions to Trinity Lutheran School in Cape Girardeau are dedicated in the afternoon; the special service in the school auditorium marks the culmination of a $252,000 building program that added two modern wings with nine classrooms, an assembly room and a bowling alley.

Construction of a building to house a new bowling alley on Minnesota Street, between William and Independence streets, is started; the building is being erected by Charles A. Hood, a contractor, who will lease it to Cape Bowling Lanes Inc., which will operate the alleys.

Local residents interested in providing additional bowling facilities in Cape Girardeau have consolidated their plans and only one bowling alley building will be constructed; that one, already underway, is on Minnesota Avenue; the other proposed building at Kingsway Drive and U.S. 61 won't be built.

Bowling on Sundays will become legal in Cape Girardeau under new city ordinance to repeal older one which had prohibited activity.

Bids on Student Union Building to be constructed on Southeast Missouri State University are opened late in morning by Board of Regents; bidding is on all phases of work including general, electrical, plumbing, heating, piping and air conditioning, food service equipment, and bowling and billiard equipment; to be constructed on Normal Avenue between Kent Library and North Henderson, Student Union will occupy site upon which Leming Hall was formerly located

Purchase of Cape Bowling Lanes, Inc., 111 South Minnesota, has been finalized between new owner, Drury Development Corp., and group which had operated business; this group is composed of Clyde Huff, Pauline Young and Edward L. Downs.

Footings are being poured for new Cape Bowling Lanes on Silver Springs Road, facility which will initially incorporate 24 bowling lanes and have room for expansion later, adding up to 32 lanes.

Construction of eight new lanes in West Park Bowling Center has been completed and they are now in use; addition provides total of 32 lanes in facility at Silver Springs and Bloomfield roads.

The Trinity Lutheran bowling lanes at 55 North Pacific St. were removed in 1980. A day care center was opened in its place.