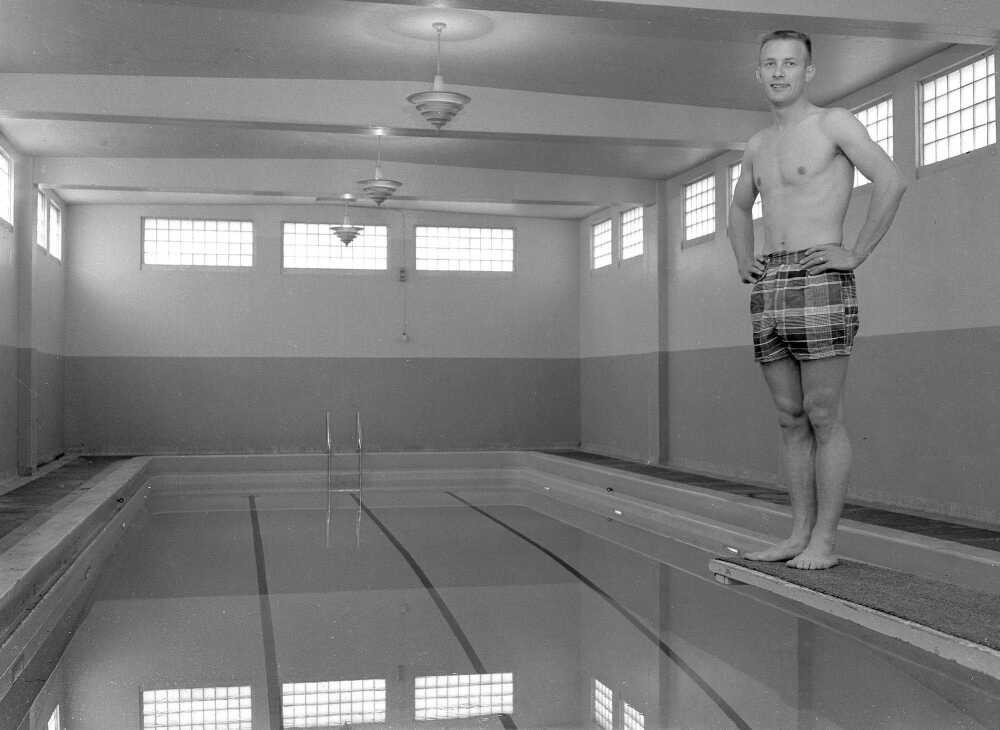 G.D. Fronabarger took this picture inside the Marquette Natatorium. The name of the man and the date are unknown. The lower photo shows the building today. It is no longer used for a swimming pool.

In 1937, a natatorium was built on South Sprigg Street for the Marquette Cement Mfg. Co. employees. Designed by local architect A. F. Lindsay, it was built completely of Marquette cement. The contractor for the structure was Penzel Construction Co. The building measures 74 feet by 92 1/2 feet. On the interior, the pool room is 30 feet by 72 feet, with the swimming pool measuring 20 feet by 60 feet. Water depth in the pool ranged from 3 feet at the shallow end to 9 feet at the deep end. The building featured men's and women's dressing rooms with showers. The equipment that powered the pool was in the basement. The equipment allowed the water to be cleaned, then softened and made chemically pure while maintaining the proper temperature. Electric lights were installed in the side of the pool. In February 1938, the building was placed into service. The building is currently owned by Buzzi Unicem USA. (From "Lost and Saved" by Terri Foley)

The natatorium will be located on the site of the old Marquette School, property now owned by the company. The building formerly used as a school there is now being razed.

In making the gift, Mr. Dickinson expressed a desire for employees to have use and management of the unit, to be a place of beauty. He said use of the natatorium is to be free to all the workers.

The place to be strictly modern, as to appearance and facilities, and will be large.

The statement issued today said in part: "in addition to the housed pool, complete sanitary facilities will be provided in the building. The most modern equipment for purifying and keeping the pool water pure will be installed. There will be two large rooms containing lockers, showers, lavatories, etc. Facilities will be provided for heating the rooms, including the pool enclosure and for tempering or heating the water in the pool during winter weather."

City's recreational program has received another boost with acquisition of Marquette Cement Mfg. Co.'s natatorium through lease agreement between City Council and company.

Marquette Natatorium will again be opened for Cape Girardeau residents who enjoy swimming during winter months, city council has decided.

Marquette Natatorium will be reopened by city Monday with expanded schedule to include public swims on Friday night, Saturday and Sunday; city had ordered natatorium closed early this new year, saying that poor attendance did not warrant cost of keeping it open; but petitions bearing 348 signatures caused council to reconsider its decision.

In what could be termed an undignified meeting, almost totally lacking in parliamentary procedure, some members of the City Council attempted to "chop down" citizens appearing before it on various items of business Wednesday night; efforts of Mayor Ivan L. Irvin to retain decorum and move on with agenda were generally fruitless; Councilman Stephen E. Strom often interrupted mayor, sometimes disputing mayor's statements; when stormy, three-hour session was over, council had agreed to instruct city park superintendent to open Marquette Natatorium from Nov. 1 to April 30, 1970 for swimming and denied request of Cape Girardeau Stock Car Association to use track in Arena Park for racing in 1970 summer season.