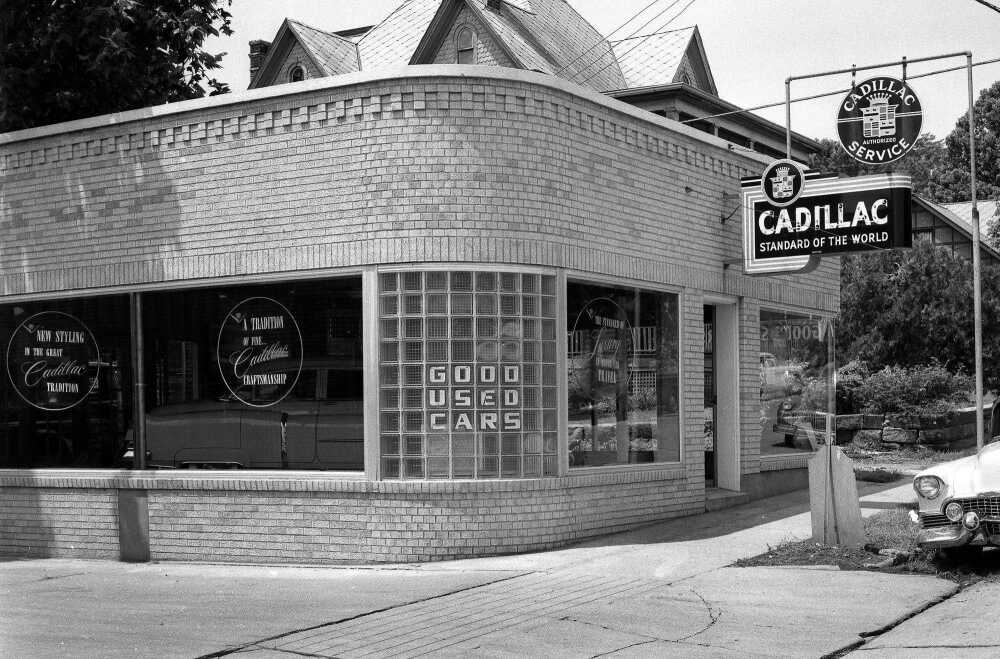 This building at 221 Independence was built in 1941 for Lesem-Millikan Motor Co. and photographed by G.D. Fronabarger.

The picture shows the smart, modern design of our newly completed DeSoto sales and service building. Interior finish and decorations are carried out in the modernistic theme, which achieves beauty with no sacrifice of utility and comfort.

Lesem-Millikan sold their first car August 21, 1931. Since that time they have delivered to their friends and customers 6,497 cars.

Lesem-Millikan, Inc. has been appointed as the Cape Girardeau dealer for the Nash line of motor cars, it was announced today by the Mississippi Valley Motor Co., of St. Louis, the distributor. The local agency, which is located at 725 Broadway, will continue to handle Studebaker, Rockne and Oldsmobile cars, it was announced.

Jess Millikan, of the Lesem-Millikan garage, local agency for Studebaker and Oldsmobile cars, announced today that they will move the Studebaker agency from 725 Broadway to 111 North Sprigg Street before March 10...

Jess Millikan, in charge of the sales department (of Lesem-Millikan garage), announced Monday that two new salesmen have been added to the force, Homer Millikan, a brother of Jess, and Carl Wright.

If you live in or near Cape Girardeau and wish an outstanding motor car value, we suggest that you visit Lesem-Millikan, Inc., the Studebaker and Packard dealers, or Millikan Motor Co., the DeSoto and Plymouth dealers. These concerns, though individual in themselves, are owned by the same local people and both establishments are personally directed by the president of the corporation, Mr. Jess Millikan.

Homer Millikan of the Millikan Packard agency, who recently took over the agency from Douglas Fletcher, said today that he has three Packards on the showroom floor. He is located in the building with Deal Sales Co.

The Homer Millikan Motor Co. has opened an automobile garage at 817 Broadway, Mr. Millikan announced today. The building formerly was occupied by an Atlantic & Pacific store. General repair work is to be done, Millikan said.

The first postwar model Buick automobile to arrive in Cape Girardeau is now on display at the Millikan Motor Co., 817 Broadway. The vehicle is an eight cylinder four-door sedan. It is not known when the cars will be available for general sale.

A new record for the number of customers served at the Lions Club Pancake Day appeared in the offing today after 1,100 persons had their three hot cakes and coffee up to 1 o'clock. Sixteen tables have been set up at the Homer Millikan motor sales room, 817 Broadway, to handle the flow of pancake eaters. The rush was so great at noon that a line formed outside.

Purchase of the Taylor Oldsmobile Agency is announced by Jesse O. Millikan of Millikan Inc.; in making the announcement, Millikan says the J & J Motor Co., 221 Independence St., will be discontinued and the Cadillac agency will be moved in with the Oldsmobile agency at 1441 Independence St. as soon as possible.

Jess Millikan of the Millikan Oldsmobile Cadillac agency, 1444 Independence, announces he has secured the agency for the Renault Dauphine motor car.