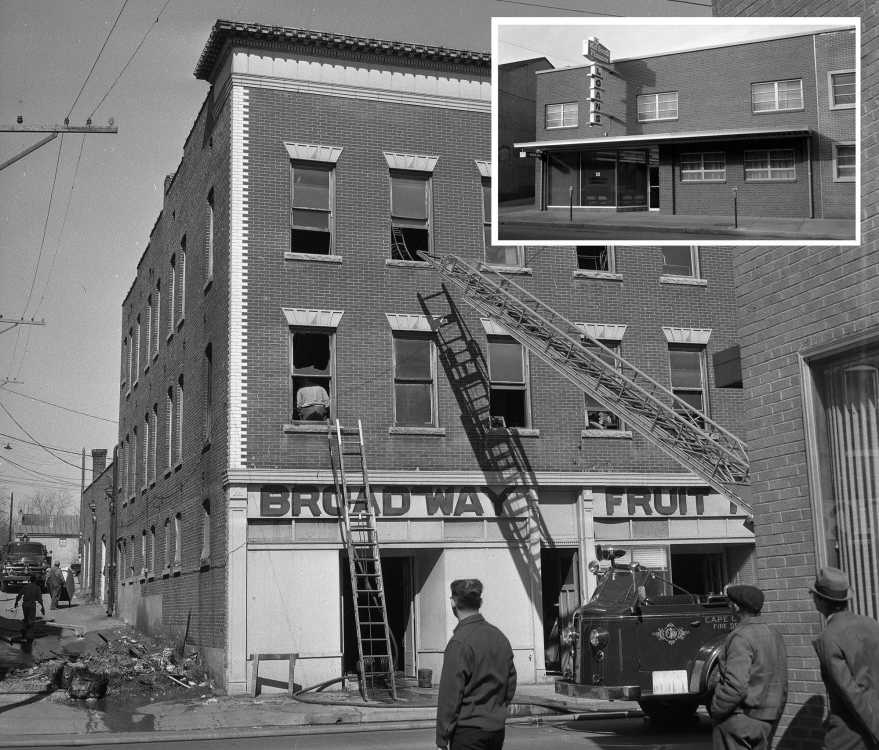 G.D. Fronabarger took this picture of the former Broadway Fruit Market, 616 Broadway, on March 2, 1961. The inset photo shows the building that later replaced it.

Here is the Southeast Missourian story published that afternoon:

A fire in the old Broadway Fruit Market building, 616 Broadway, was put out in ten minutes by firemen this afternoon after the blaze caused some damage to the southwest corner of the structure.

The blaze started from sparks of a cutting torch workmen were using to sever a radiator pipe near the ceiling of the bottom floor, Assistant Fire Chief Richard Mahy told The Missourian. The three-story brick building is owned by the Rust and Martin Furniture Co.

Harry Rust of the company said remodeling is being done to the bottom floor to convert the former fruit market to a storage and workshop for the furniture company. It was in the process of this remodeling that the fire broke out at 12:57.

Assistant Chief Mahy said the blaze quickly spread to a room on the second floor and caught several pieces of old furniture on fire. The blaze continued to spread up the wall to the floor of the top story but was contained there by firemen.

Except for some pieces of old furniture, most of the building's rooms were empty. There was no damage other than to the southwest corner of the building, assistant Chief Mahy reported.

Four fire trucks were called to the scene, including the aerial truck, and eight firemen fought the blaze. They remained in the building for some time after the fire was extinguished in cleaning up and making sure there would be no fresh outbreak.

Police were on hand to block traffic on Broadway between Sprigg and Frederick.

The Broadway Fruit Market, owned by John Mehrle, vacated the building on Dec. 31.

This was not the first time that firefighters were called to the building.

This story was published Jan. 10, 1935 in the Southeast Missourian:

Rebuilding of the basement and the front of the Broadway Fruit Market building, 616 Broadway, wrecked early Wednesday by an explosion in a banana ripening compartment, will begin at once, the owner, Julius Stearn, said today.

The damage, placed at approximately $7000, including the wrecked banana room and machinery in it, and the ground floor front of the three-story brick structure, which was ripped out by the force of the blast. New machinery for refrigeration and material for rebuilding the cork and concrete walls is being secured and a new front will be installed.

Mr. Stearn said today he is convinced that artificial gas collecting in the banana room after the flame on a Bunson burner went out was set off by an electrical spark to cause the explosion. He expressed belief the electrical spark came when a light switch on the outside of the banana room was turned on. The gas burner in the room was used to heat water in a large basin, vapor and heat from this serving to produce a tropical atmosphere and ripen green fruit. A car load of green bananas had been placed in the room the previous afternoon for ripening.

Bids are received by Julius Stern, owner of the Broadway Fruit Market building, 616 Broadway, for the remodeling of the front of the structure, which was badly damaged Jan. 9 by an explosion; there will be two ground-floor entrances and a center entrance for two upper floors; black carrara glass and stucco will be used on the front of the structure.

Wayne Rust, owner of Rust & Martin, upholstering and repairing firm, 615 Broadway, has purchased three-story brick building across street at 616 Broadway, owned by Julius Stern, of Broadway Fruit Market, also vacant lot adjacent to building on east and lot in rear of property; Rust plans extensive improvements to newly acquired property and may, in addition to renovating building, expand building facilities; he plans to move his business into this structure from across street.

Broadway Fruit Market plans to build large and modern building after war, company announces; structure, to have adequate loading docks and modern refrigeration, is to be situated on railroad line; building at 616 Broadway has been sold to Wayne Rust, but Broadway Fruit Market will continue in business, at same address for present; traffic has been hampered on Broadway due to loading and unloading there; rail line site will be selected for new wholesale market.

Advertisement in the Southeast Missourian, March 21, 1951:

Must be of good character and sober and honest to sell fruit and vegetables in surrounding territory. Good wages; car furnished to applicant selected.

The Broadway Fruit Market, an institution on Broadway for almost 40 years, has disposed of its merchandise to Cauble and Field, wholesalers, 420 South Middle, and closed its warehouse and office at 616 Broadway.

John F. Mehrle, secretary-treasurer of the corporation, who has operated the business for many years, has associated with the Cauble and Field firm and will be employed in the office.

Mr. Mehrle has been with the market for more than 30 years, first being associated with its organizer, Julius Stearn, who operated it for many years.

The business was established around 1921, Mr. Mehrle recalled. In about 1942 it was incorporated with Mr. Stearn, Mr. Mehrle and Leo Brennecke each having a third interest.

Subsequently, Dave Stearn, son of the founder, acquired Mr. Brennecke's interest. Later Frank Cusamano and Joseph Cusamano of St. Louis acquired the Stearn interests and with Mr. Mehrle each owned a third share of the business.

Mr. Mehrle recalled in the early days there were not many outlets for fresh produce. He said the first sale made by Mr. Stearn was to Vandeven's Grocery, which bought a case of grapefruit.

Some produce came here by river and was transhipped elsewhere in the area. Other items came by rail and went to various stores or wholesale outlets in southeast Missouri, he said.

The building on Broadway used by the fruit market is owned by Wayne Rust.

In March 1961, a permit was taken out to renovate the building.

By June 1961, Wayne Rust had the old building removed and a new one almost completed. It adjoined a building used as the district Social Security headquarters.

The first business to locate in the building was Mid-South Finance which sold out to Charter Finance in 1981. Charter moved there in 1982.

Hartle's Art Plaster moved into the building in 1987 and later, the Fleece Shoppe.

In 2018, Catapult Creative House is at the site.