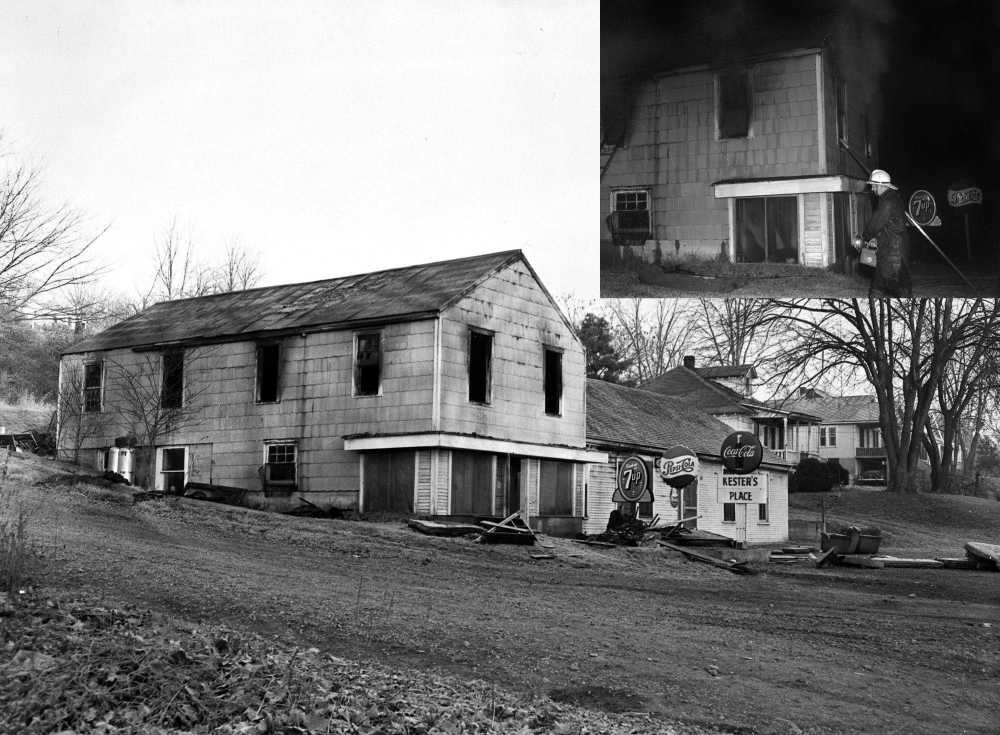 Here is the history of the mystery:

Anybody know, or have any pictures of what used to be at the corner of Bertling and Big Bend. There's what looks like a foundation, and some concrete steps. Always wondered what used to be there.

The comment was posted on my blog about Bill Beard and Wayne Freeman:

Ken Steinhoff then commented about the foundation site and posted a link to his blog with recent photos he took of it:

His blog generated a couple of dozen comments through which the mystery was solved.

I will not repeat all of that here, but I will add some news items about Kester's Place which our librarian, Sharon Sanders, pulled from the Southeast Missourian archives.

The photographs by G.D. Fronabarger show the fire and its aftermath at the Kester building, a combination dwelling and store structure at 1701 Bend Road in Cape Girardeau. The Southeast Missourian published this story Dec. 5, 1957:

Deborah June Nance, 4, daughter of Mrs. Juanita Nance, 1701 Bend Road, perished from suffocation in a fire which raged through the two-story frame dwelling in which the family resided.

Firemen fought flames and smoke for almost an hour before they were able to locate the child's body between the foot of a bed and the south wall of her upstairs bedroom.

Fire Chief Carl Lewis said a venetian blind and wall paper had fallen on her body, covering it. He said he was sure the child had died of suffocation, since the burns on her body did not appear severe.

Attempts to reach the child immediately after the fire was discovered were unavailing.

Richard Hall, son of Dr. and Mrs. Frank Hall, and Keith Jones sought to enter the upstairs window next to the spot where the child was found. Flames drove them back. Simultaneously Gene Hohler and Junior Mullins tried to enter the upstairs room by a stairway from Kester's Place. Flames also prevented them from going upstairs.

The fire was reported by Sandra Lee Nance, 11, sister of Deborah, who was baby sitting with her while their mother, a nurse at Cape Osteopathic Hospital, was on duty. Another daughter, Patricia Ann, 9, was with relatives.

Firemen said they were told Sandra Lee went out the back way and entered the Kester establishment to report the fire. Witnesses said by that time flames were coming out the windows. When firemen arrived the upper part of the building was in flames.

The entire building, upper and lower stories, and the Kester business were damaged by the flames and smoke.

The large frame building fronts on Bend Road. It is connected to Kester's Place and is situated almost opposite the intersection of Country Club Drive and Bend Road. Bertling street extends along the south side of the house.

The Cape Girardeau City Council passed the first reading of an ordinance granting a special use permit to Bill J. Adams, Paul A. Brewer and Larry J. Smith for operating a used furniture store at 1701 Bend Road.

The Cape Girardeau City Council filed a recommendation from the Planning and Zoning Commission to deny a request for rezoning of 1701 Big Bend Road from residential to commercial.

The Planning and Zoning Commission had expressed concern about traffic safety since the site is a corner lot at Bertling and Bend Road.

In addition, city officials said, the surrounding area is residential and Bill and JoAnn Adams who requested the zoning change have not presented any specific development plans.

The property owners in a rezoning application noted that there had been a tavern-grocery store operation at that site dating back to the 1940s. The tavern and store closed in the late 1970s.

They said in their application that the building was torn down due to age and fire damage. They said it would be a suitable site for a convenience store, car wash or delicatessen.

After that, there is no listing for 1701 Big Bend Road.

Our librarian doesn't live in the past, but she loves to travel back in time through the pages of the Southeast Missourian.

An Out of the Past item from 75 years ago was taken from this story:

Leaving a trail of chicken heads and feathers, thieves Saturday night stole 22 hens from the henhouse of Mr. and Mrs. Barney B. Hodge, living on the Bend Road at the north edge of the city.

So quietly did the thieves work that Mr. and Mrs. Hodge did not know their chickens were gone until a neighbor noticed some of the heads, which had been pulled off to quiet the hens, lying beside the east-west road on the city boundary, which passes near the Hodge residence. The henhouse is only 40 feet from the house.

An automobile track beside the road south of the henhouse, men's tracks and white feathers showed the chickens were carried to that road. The Hodges said they had had 29 hens and a rooster, all fine White Rocks, and that the rooster and six hens remain. The hen roost was not locked.

Seventeen heads were found beside the road. The men's shoe tracks were to be seen at many places in the mud, some being of average size, one pattern being extremely large.

County officers and police were advised and are making an investigation.

The Barney B. Hodge residence is listed to the north at 1703 Big Bend Road.