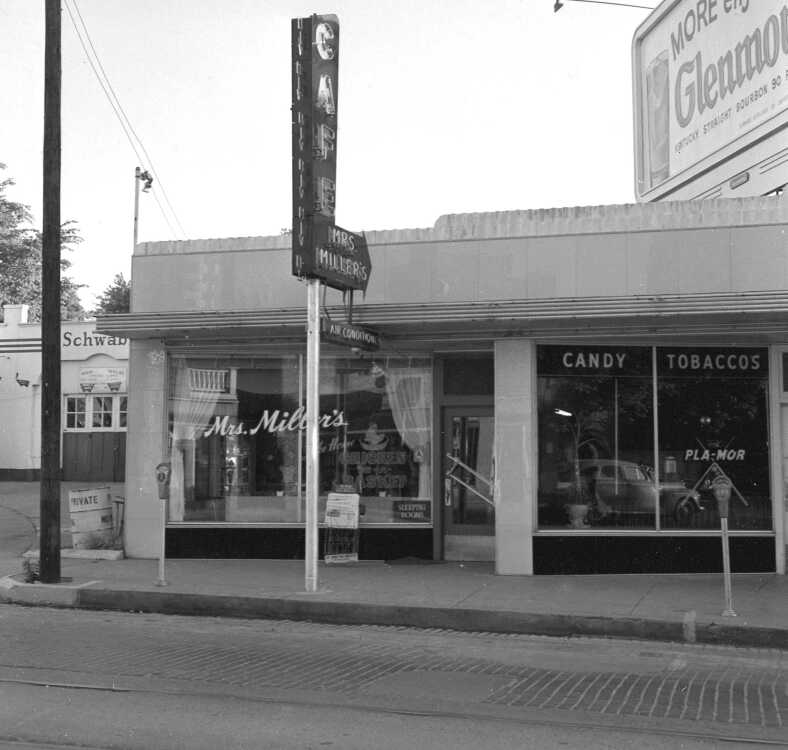 The Pla-Mor Recreation Center, 826 Broadway, and Mrs. Miller's Cafe, 828 Broadway, are shown in this picture taken by G.D. Fronabarger about 1958. The Sachse building was on the west side of the Esquire Theatre.

The cafe was operated by William B. and Eva M. Miller. After the Millers' business closed, the building became Wayne's Grill, operated by Wayne Freeman. The Pla-Mor was built in 1947 on the site of the old Cramer house.

The white clapboard house with green shutters at 826 Broadway, a familiar sight to local citizens for nearly a century, will soon be no more. Workers started tearing down the structure Wednesday to make room for a parking lot addition to the New Esquire theater under construction next door.

W.G. Bartels, owner of the property, and F.F. Braun told The Missourian today that the building was there when they were children. Both estimated the age of the building from 85 to 95 years.

The building was the home of the Cramer family for several generations and only recently passed into the hands of Mr. Bartels. The Cramers, only one of whom remains living today, were according to Mr. Bartels, "one of the most educated and outstanding families in the city."

The elder Cramer, Maurice, was a judge of the Court of Common Pleas, and he and his wife, Cora, had five children. All the boys in the family became lawyers and the girls, school teachers. Laura Cramer, the sole survivor, is reportedly still teaching in one of the St. Louis schools.

For a time the family converted the area behind the house into a recreation and refreshment center, and the place became the meeting spot of the community which in the early days numbered only about 4,800. Mr. Bartels recalled occasions when the garden took in such huge amounts of money that it would have to be carried away in wooden buckets, with armed guards.

All torchlight parades of the time usually ended there, and whenever a prominent speaker came here in the summer, he always spoke from the Cramer bandstand. The garden reached its peak in fame in the early '80s.

Records of the property show that early in the last century Louis Lorimier, the city's founder, was the owner, as he was of most everything else. In 1891, court records reveal, the property was owned by George H. Cramer, and in 1893 it was deeded to five of the children of Maurice and Cora Cramer. Laura received the property in April, 1917, together with Emma Crickhaus, a sister. Mrs. Crickhaus had a stroke just after she and her sister signed papers selling the property to Bartels. She remained unconscious for several days and then died.

"Billiard top-notcher to perform in Cape"

Cape Girardeau billiard enthusiasts will have the chance of seeing one of the nation's top-notch pocket billiard experts Monday afternoon at 4 o'clock when Johnny Irish, world champion contender, puts on an exhibition at the Pla-Mor, 826 Broadway.

The 45-minute show of trick shots and cue-ball artistry will be climaxed by a match with a local player of talent --name as yet undisclosed. Harry Sachse, owner of the Pla-Mor, said there would be no charge for the exhibition.

The Irish exhibition match of 100 balls will show why he has been able to defeat such champions as Ralph Greenleaf and Mosconi. He defeated the former last winter, 200 to 192 after Greenleaf had opened the match with a run of 102. Greenleaf needed only eight points when Irish ran out with 88.