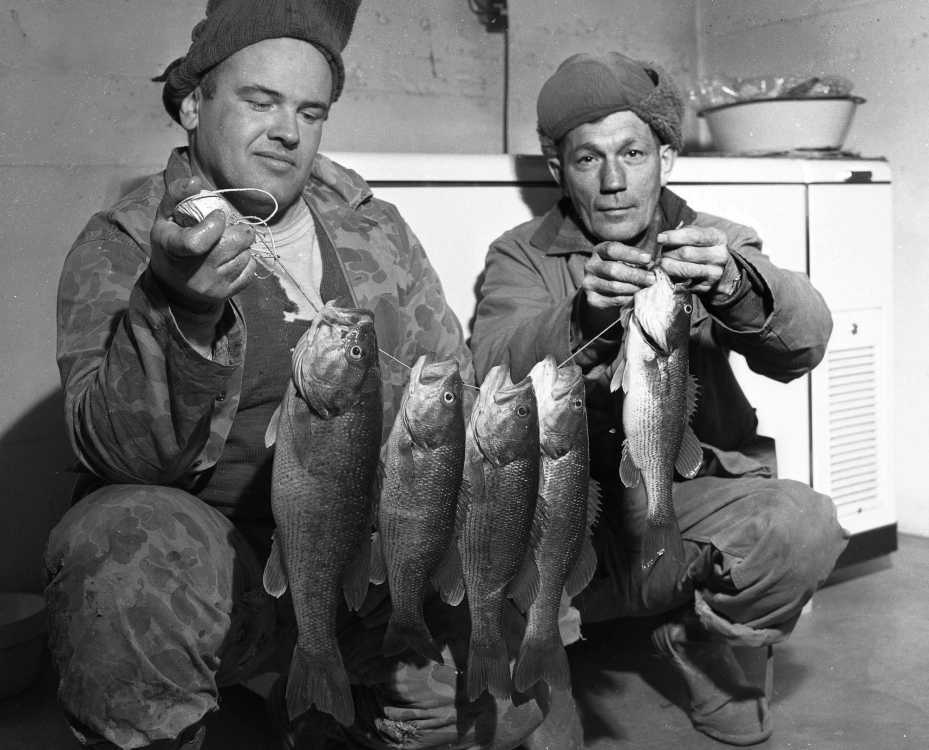 Anglers who have stamina enough to brave this cold weather may get results like this pair, Bill Beard, left, and Wayne Freeman of Cape Girardeau, who found the largemouth bass hitting in Castor River Sunday despite near freezing cold and water made colder by melting snow. The pair got these bass, running from 1 1/2 to 3 pounds, on deep-running bomber lures. They took their success to indicate this is going to be a good year for anglers. (Photo by G.D. Fronabarger)

Bill Beard owned Beard's Sports Shop at 818 Broadway. Wayne Freeman operated Wayne's Grill at 816 Broadway. When Southwestern Bell was ready to expand its building, Freeman moved his business to 828 Broadway next to the Pla-Mor.

Hardee's, a restaurant chain based in Rocky Mount, N.C., is coming to town. Mr. and Mrs. Wayne E. Freeman will erect the restaurant building at the northeast corner of Broadway and West End Boulevard. They have negotiated with a group of local investors to operate the business.

Four brick dwellings, three fronting Broadway and one fronting on Boulevard, will be razed to make room for the structure. The site has a Broadway frontage of 150 feet and a depth of 161 feet. For the past several months the dwellings have been used for student housing. Bids are being received for razing the structures and for erection of the new building.

Occupying 2,960 square feet of space, the building will provide interior seating for 92 customers, with parking in front and along the east and west sides. The restaurant, which features hamburger and a varied line of short order items, will provide only interior service and will not have a drive-in provision.