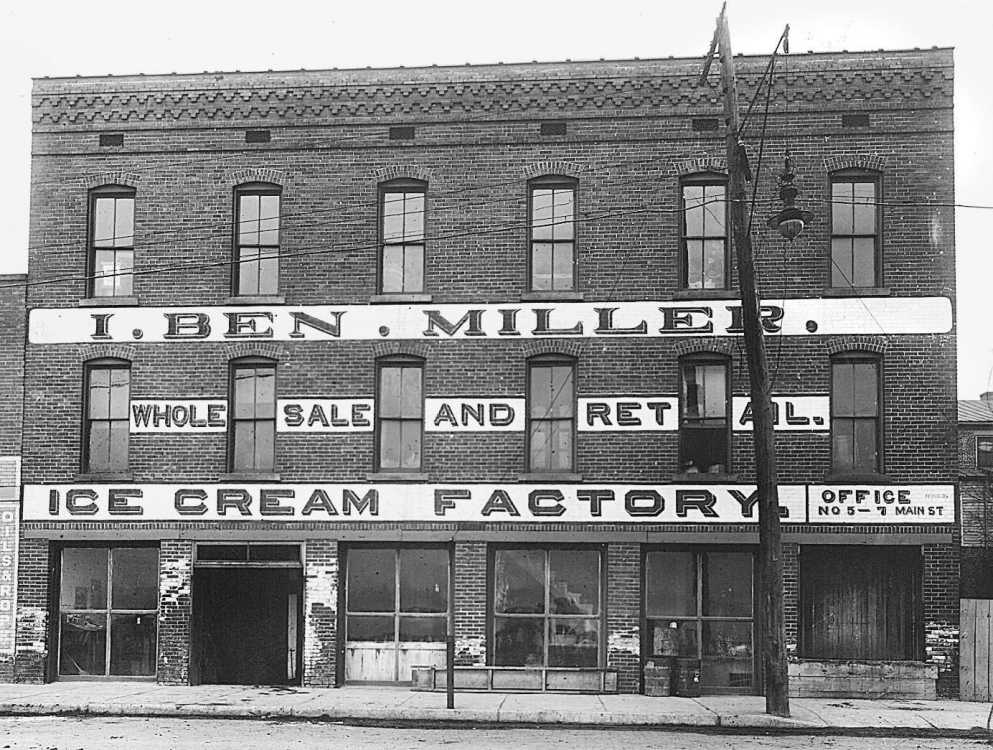 The I. Ben Miller ice cream factory is shown at the Water street location, between Independence and Themis. According to "City of Roses," the building faced east on Water street and was built between 1880 and 1885. It was removed in the early 1930s when the Montgomery Ward store was constructed.

Sharon Sanders found this information about the factory:

I. Ben Miller's ice cream factory on the levee was completed today and his force of men started in to freeze hundreds of gallons of various kinds of cream to supply the demand these hot days...

The factory is located in the Houck building formerly occupied by the Ruehman junk company. The floors were taken out and a concrete foundation built up several feet to bring the floor above the level of Water Street, to be established when the Frisco raises its tracks and puts in the wood block pavement under contract with the city....

He built the factory on Spanish street, just south of Independence, in 1916. The address was 25 S. Spanish (although the 1920 city directory says 21 S. Spanish).

LOST -- I. Ben Miller's Ice Cream and Candy Manufacturing Plant -- I. Ben Miller purchased the property at 25 S. Spanish St. on January 12, 1916, to erect a new building to house an ice cream and candy manufacturing plant. He acquired the property from J. Mat Morrison, and on the lot at the time was a blacksmith shop. The new plant opened July 13, 1916, with 25 employees. On the first floor were two large compressors and three ice cream freezing machines. Also on this level was the freezing room with the capacity to hold 3,000 gallons of ice cream and an ice manufacturing plant that could produce five tons of ice daily, taking only 10 hours to produce. There was a room used to store the fresh cream and a packing area for the ice cream on the first floor. The second floor housed the stockrooms for the candy manufacturing, a large kitchen, a dipping room, a chocolate room, the box room and the finished candy room. The heating plant was in the basement with a salt bin. Miller invested about $40,000 into his new plant. In April of 1928, Miller entered into merger with Midwest Dairy Products and retired from the ice cream manufacturing plant. Hutson's Furniture purchased the building in December 1968 for warehouse space. In January of 1969, the building was in the process of being converted to a warehouse when it caught fire. The fire was started by a cutting torch; the welder thought he had extinguished the fire and left for lunch. All fire stations in town and available firemen were called to the scene. An explosion occurred in the building and flames reached 40 feet above the roofline. McDonald's restaurant provided food and drinks to the fire fighters. The property is a privately owned parking lot serving the downtown area.

This story was published in the Southeast Missourian on July 18, 2002:

---- Dallas Niswonger has an old "I. Ben Miller" porcelain sign.

---- Niswonger, a collector of Cape Girardeau memorabilia, also has a milk bottle and an ice cream carton from Miller's ice cream emporium.

---- Gail Crites has a couple of I. Ben Miller milk bottles herself.

---- I. Ben Miller was a big name in ice cream locally from 1893 through 1928, until he sold his ice cream plant to Midwest Dairy Products Corp.

---- "I worked at the parlor while I was going to school," said Morgan. "The ice cream was really good."

---- Miller had the first ice cream plant utilizing electricity between St. Louis and Memphis, and delivered ice cream daily to an area stretching from 40 miles south of St. Louis to 40 miles north of Memphis.

---- Miller covered his ice cream and milk production. That included the work of Miller's Lila Drew Dairy Farm, located on North Sprigg Street. The farm was named for his daughters, Clara Drew Miller and Lila Miller.

---- Miller, a native of Cape Girardeau County, attended Normal School and passed his pharmacy Board exam at Kansas City.

---- He worked three years as a drug clerk before opening his own Main Street Drug Store, where he added a soda fountain in 1894.

---- Ice cream made with a single hand-turned freezer was popular, and Miller added more freezers and flavors over time. Between 1890 and 1911, he turned his enterprise from a single shop to a productive factory, becoming an electric-powered ice cream plant.