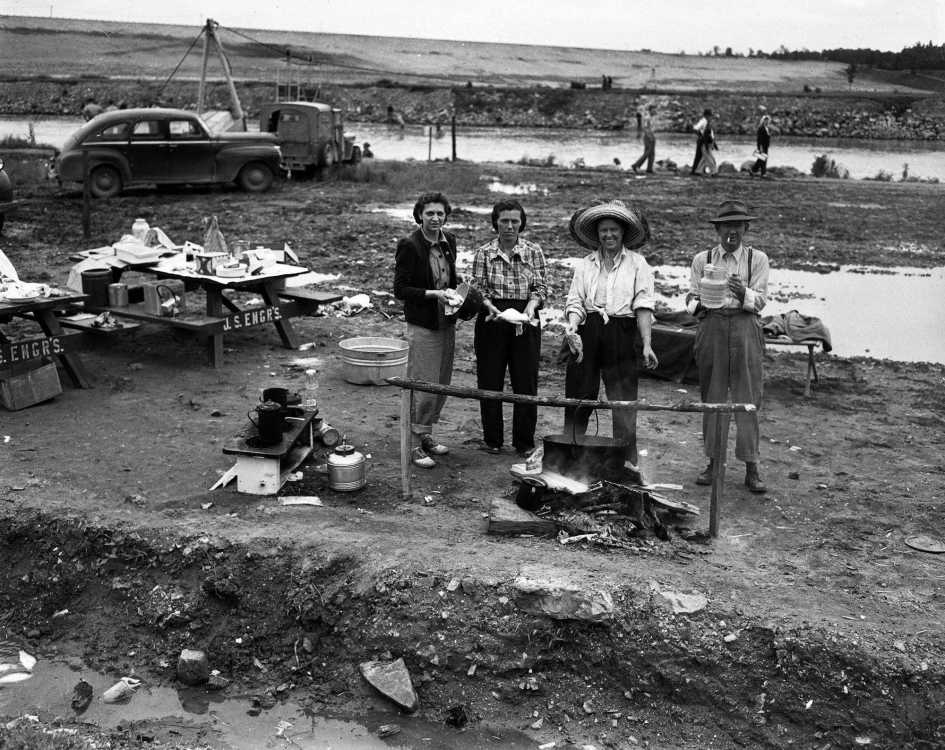 We found this picture of a fish fry was published June 5, 1946 in the Southeast Missourian. Our best guess about the subject was completely wrong.

We thought it was taken along one of the drainage ditches in the Bootheel. Instead the photo by G.D. Fronabarger was taken at Wappapello Dam.

These residents of Bertrand, shown above as they were photographed Sunday at Wappapello Dam, are frying fish in the well-proven method, utilizing a large kettle and plenty of lard. Left to right are Mrs. Harold Uthoff, Mrs. Jack Powell, Mrs. Bill Darby and Zeke Syre. While they were doing the frying, husbands of the three women were off catching more fish for the kettle.

But we still like this story we posted earlier:

Sam Blackwell wrote this story about the drainage project that was published March 4, 1993 in the Southeast Missourian:

Just after the dawn of the 20th century, a group of businessmen set out to mop up the swamp that was Southeast Missouri. The job, the largest drainage project ever attempted at the time, was completed in a stretch from 1909 to 1926 at a cost of $11 million.

It turned some half a million acres of soupy cypress forests into some of the state's most fertile agricultural land.

Often called Dark Cypress, the Big Swamp or the Great Swamp, the area in the flood plain south of Benton in Southeast Missouri was all but uninhabited by humans until early in the 20th century. All kinds of wildlife, including bears, abounded.

"It has a mystique of its own," says Frank Nickell, director of the Center for Regional History at Southeast Missouri State University. ".. It was sort of a forbidden area. There were very few trails in it."

The marshlands, then constituting one of the largest swamps in the American interior, would have resembled the Mingo National Wildlife Refuge, which, ironically, is an artificial swamp resurrected from cornfields.

Transforming the Big Swamp was Herculean work that required mosquito-repellent men, steam-powered stump pullers and dredges, and about 20 years.

Though it took many more years to clear the land for farming, and the Depression nearly forced bankruptcy, the Little River Drainage District eventually was a boon to Southeast Missouri. Cotton, and later corn, soybeans, watermelon, potatoes and other crops became the mainstays of the economy. Ancillary businesses also blossomed.

The plan was not universally loved, however. Cape Girardeau railroad builder Louis Houck was chief among the opponents, challenging the plan all the way to the U.S. Supreme Court.

He called it a "scheme promoted by a bunch of real estate speculators" and predicted "it will be a gigantic failure."

The project was opposed by the railroads - the Cottonbelt, Frisco and St. Louis Iron Mountain and Southern - because they had built lines into the swamp to serve the timber industry and the few farms that existed.

The district also created two distinct classes of people in the region - those who owned the newly drained land and those who merely worked on it, says Nickell.

"The people in charge of draining the swamps were the people who bought up the land, and they did not share with the people on the bottom," he said.

The Bootheel counties today have the state's worst poverty.

Until the district was formed in 1907, isolated attempts - dating back to the early part of the 19th century - had been made to drain parts of the land, but the swamp usually reclaimed its own. A grand plan was needed, one that would encompass parts of seven counties and move more earth than the builders of the Panama Canal.

The crucial element of the project was the headwater diversion channel, which stretches about 40 miles from near Greenbriar in Stoddard County to its outlet into the Mississippi River south of Cape Girardeau. Castor River, Crooked Creek, Hubble Creek and the Whitewater River enter the channel at various points and continue to the Mississippi.

"That was the key to making the other parts work," said Larry Dowdy, executive vice president of the district. "It diverted the source of the water supply that made that swamp."

The southern part of the project primarily consists of five parallel ditches that carry runoff to the Arkansas state line, where it becomes part of the St. Francis River and eventually the Mississippi.

What makes this part of the project work is the 100-foot drop in elevation from Cape Girardeau to the Arkansas border, Dowdy says.

Ditch No. 1 is the longest, running more than 100 miles. The ditches, including the many laterals carrying water to the primary ditches, range in width from 20 to 220 feet, and have an average depth of eight feet.

The lower portion of the district has 850 miles of ditches and 240 miles of levees.

Also essential to the project are three water detention basins that store flood water, preventing the levee on the south side of the diversion channel from being topped when the rivers are running high.

Today, the district's 27 full-time employees, with the assistance of the U.S. Corps of Engineers, maintain more than 900 miles of levees and channels. The maintenance cost is about $1 million a year.

The 2,300 landowners within the district contribute maintenance taxes at an average rate of $2.50 an acre.