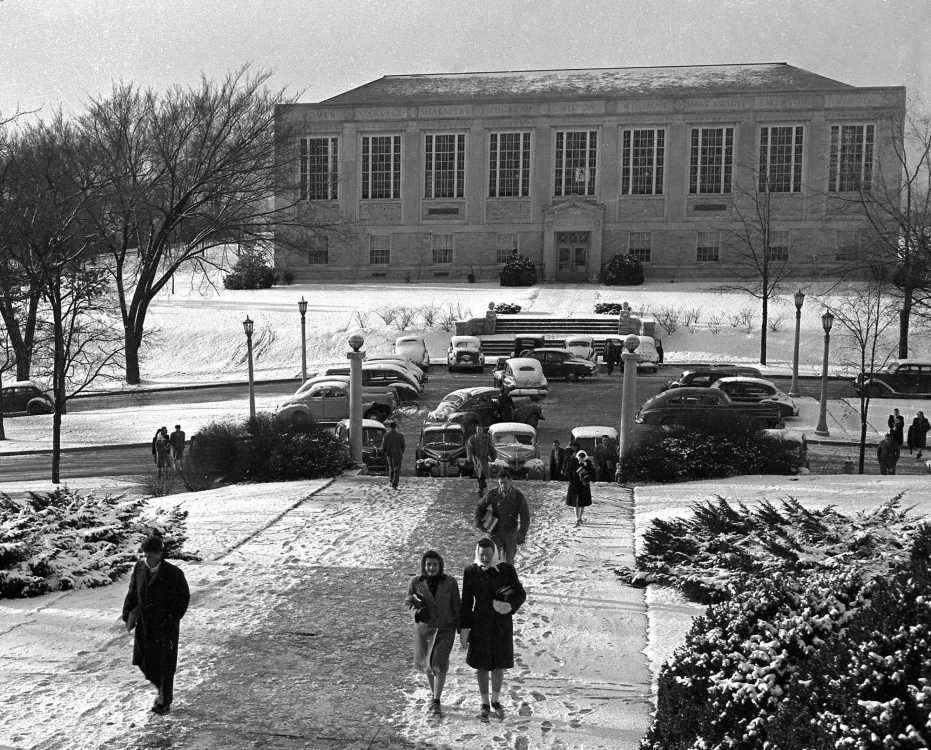 What do Homer, Carlyle, Shakespeare, Thoreau, Milton, Whitman, Mark Twain, Emerson and Virgil have in common?

Each writer has their name inscribed on the front of Kent Library in this picture that was probably taken in the late 1940s.

The names on the library facade were chosen in 1939, primarily by English professor Dr. Harold Grauel and by Dr. W.W. Parker, then president of the university.

The library was named for Sadie Kent. Here is a story about her from the Southeast Missourian, March 4, 1993:

For more than three decades, Sadie Trezevant Kent ran Southeast Missouri State University's library, dominating it like an army general would his troops.

Miss Kent, as she was called, was the matriarch of the library. In many ways, to those who knew her, it was her library, not the university's.

"You wouldn't forget Miss Kent," said Alton Bray, Southeast's longtime registrar who retired in 1984. "She ran a library in which she emphasized quietness.

"Sometimes she created more noise than the person accused of making it," remembered Bray, who graduated from Southeast in 1941.

"When I started in 1937, the library was in Academic Hall. It was down at the east end, where the business offices are now," said Bray.

Kent came to Southeast, then known as the Third District Normal School, in 1905 to teach hygiene and geography.

She later became assistant librarian before moving up to the post of head librarian. Kent directed library operations from 1910 to 1943.

"She was a real lady of the old school," said John Blue, a former editor of the Southeast Missourian who graduated from the university in 1938. At that time the school was much smaller, with an enrollment of about 600 to 800 students, Blue said.

"She demanded respect and she received respect from her colleagues as well as the students.

"When she was in her library, she was the king and the queen, and the whole thing," remembered Blue.

"No one talked there without a penalty," he said. She called the girls, "Sistuh," said Blue.

"Some remember her as an overbearing Army general who acted as if every book and every piece of furniture in the library were like rare jewels to be guarded with her life," wrote retired Southeast English professor H.O. Grauel.

Grauel's observations about Kent are included in a recently published book of his essays.

He said that those who "really knew her were also impressed by her dedication to her profession, by her willingness to share her knowledge of the workings of a library with others, and by her often gentle and caring nature."

Kent lived to see the library develop from a small group of books kept in the president's office to a separate department in Academic Hall, and finally to a full-fledged collection of books housed in a separate building, largely designed by her and named in her honor.

Judith Ann Crow, a former librarian and writer for the Southeast Missourian, wrote in 1968 that Kent ruled the library with "an iron hand and a voice to match."

She said, "Miss Kent was firmly convinced that `This is a place to study, not talk,' and she saw to it that everyone adhered to that rule."

In Grauel's book, "The Inimitable Professor H.O. Grauel: His Essays on This and That," the retired English professor talks of Kent and the Academic Hall library.

The library was on the east end of the main floor of Academic Hall, blocked off by huge iron gates.

"Each night Miss Kent personally locked those gates to protect the treasures within," wrote Grauel.

"Throughout the day she patrolled every inch of the library, admonishing students not to talk, not to make any marks in library books, and to be especially careful not to spill any ink because, as she would tell them in a voice heard by everyone in the room, `one ink blot can ruin a book.' She was equally domineering with members of the faculty or visiting strangers."

Kent and Grauel personally carried the first book over to the new library. That book was the Bible.

Newspaper accounts reported that it took 30 men four days to move 70,000 volumes and 50,000 pamphlets and the library staff almost a month to catalog the materials for the fall quarter.

The names of authors were engraved in stone on the library's exterior.

In one of his essays, Grauel recalled that the stone mason wanted to alter the spelling of Shakespeare.

Grauel suggested "Shakespere," one of several ways that the famous playwright spelled his name.

That spelling was used on the frieze. Soon after, letters arrived at the school from people critical of what they felt was the "misspelling" of the name.

"When the enlargement of Kent Library was undertaken in the '60s, I saw to it that the name of Shakespeare appeared on the new facade as SHAKESPEARE," Grauel wrote.

The regents had planned to name the library after Kent, who Regent I.R. Kelso of Cape Girardeau called "the best librarian in the United States."

But the building was constructed partly with federal Public Works Administration funds and that agency would not allow its buildings to be named after living persons. The university reacted by leaving a blank space on the stone above the front door.

The library was subsequently expanded, with the construction work completed in 1968. But the building still bears the name of Southeast's legendary librarian.