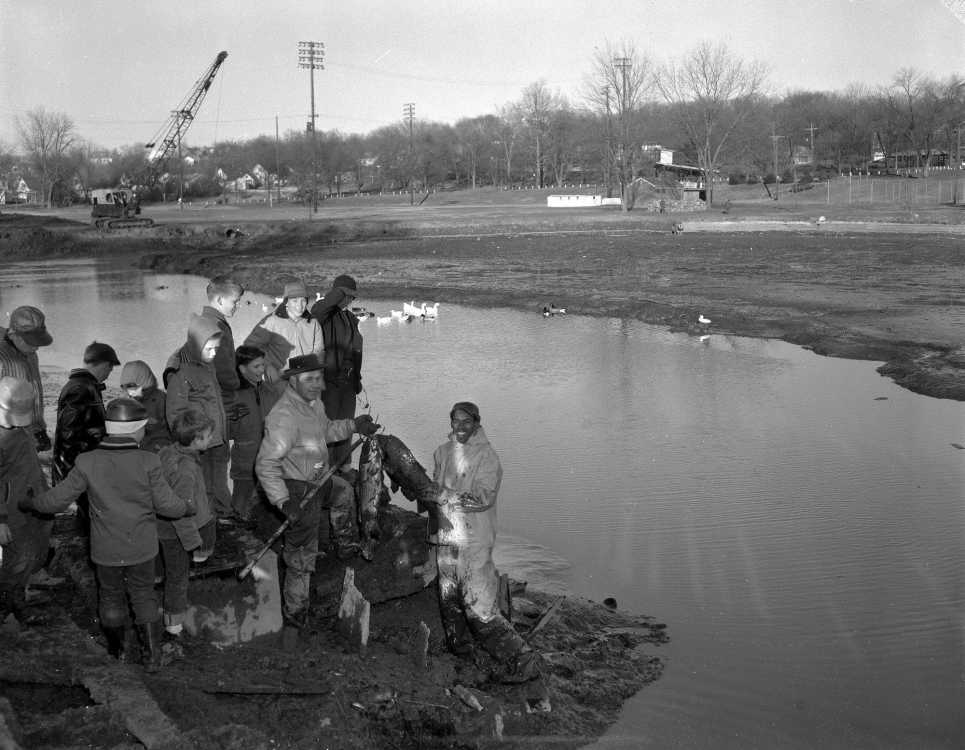 The first community project of the new year by a Cape Girardeau civic organization was given the "go" sign Wednesday night by the Exchange Club when, at its regular meeting, it finalized plans for draining, dredging, cleaning and generally overhauling the lagoon at Capaha Park. Work is to begin at the earliest possible time after water has been lowered and dragline and crews are located at the site. Funds for the project will come from the club and from the city's park department.

The committee reported it has secured an agreement with the R.B. Potashnick Construction Co. for the use of a dragline. Making arrangements through Irvin Garms, the club will not be charged for use of the dragline to remove earth from the lagoon, but expense of the operator and fuel used by the machine will be supported by the park department, the committee said.

The many tons of mud and silt removed from the lagoon will be piled along the banks of the lagoon, and when it has dried will be hauled away by the street department. The club reported an agreement with City Commissioner John Hayden. The club also has the offer of the Federal Materials Co., made through A.W. Zimmer Jr., who heads the firm here, of rip-rap stone that will be used to protect banks of an island to be built in the center of the lagoon as a waterfowl area, replacing the one now on the east side of the lagoon.

A definite plan of renovation has been outlined by the club. When completed the lagoon will provide a much better place for the community children to fish and will present an attractive appearance--a far cry from its present condition.

The first step will be to lower water to a stage where the lagoon bottom can dry out and permit dragline use for earth removal. A channel will be cut temporarily adjacent to the west side bank to retain water and hold the fish now in the lagoon. Most of the rough fish will be removed and plans are being formulated for re-stocking the lagoon when the renovation has been completed. The club will welcome the assistance of the general public in this.

Concrete blocks that surround the lagoon will be removed and cleaned. The new island for waterfowl will give the birds more nesting protection. The banks will be finished with rip-rap stone to foil erosion. Concrete headers will be installed around storm water inlets and outlets.

The cost of the project which, if done by contract might approach the $20,000 mark, will be greatly lessened by cooperation of the club, which has made some of its funds available, and the city's park and street departments.

Work on the lagoon will be pushed as rapidly as weather conditions permit, Krueger said. He has urged cooperation of the community in the project and said financial assistance from individuals or other groups will be welcomed. When the work has been completed, the lagoon has to be restocked with fish so that youngsters will have a good place to fish this coming spring. The community's help will be needed in this phase of the development.

Here's one way anglers can help: When they go fishing they could save a part of their game fish catch and put these fish in the lagoon. Farmers who frequently have ponds renovated, could make a part of the fish population of these ponds available for the lagoon. Securing a couple of ponds as rearing bases for the lagoon fish has also been suggested.