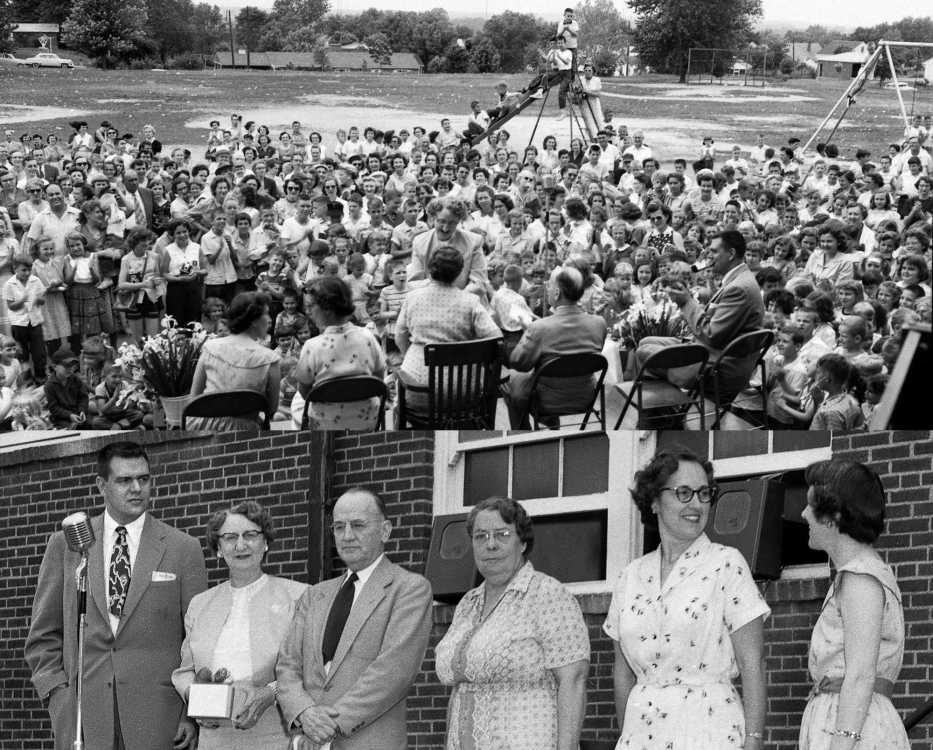 It was 55 years ago that G.D. Fronabarger took these pictures of a ceremony at Franklin Elementary School. In checking with the school, we found that its first principal, Miss Nellie Krueger, was standing third from the right side in the lower photo. Our librarian, Sharon Sanders, found the story of the event in the May 21, 1955 edition of the Southeast Missourian.

The Franklin School playground was the setting for a program May 20, 1955, honoring Krueger, who was concluding her last year as the school's principal. She was principal for 28 years.

In the top photo, state senator Albert M. Spradling Jr. is seated right, and standing behind the microphone in the lower photo. Spradling, the master of ceremonies, was state senator from 1952-1977 and a former pupil at Franklin.

Miss Virginia Willer, holding a gift, was one of the first teachers at Franklin when Krueger began her duties in 1927. She presented Krueger with a corsage of pink carnations.

The other gentleman was Louis J. Schultz, superintendent of Cape Girardeau Public Schools. He briefly outlined Krueger's work in the school system. Schultz retired in 1962. When the former Central High School on Pacific Street, where Schultz had spent all his years in Cape Girardeau education, was remodeled into a seventh-grade center, it was named Louis J. Schultz School. It was dedicated in the fall of 1965.

During the ceremony, Mrs. Linus Bartels, president of the Franklin Parent-Teachers Unit, led the audience in a song written for the occasion. Mrs. Glenn Carroll, immediate past president of the PTU, presented Krueger with a 21-inch television set, a gift from her pupils, patrons and teachers past and present. She also received a check.

The program came at the end of the school's annual Play Day program, which included races, dances and games. The ceremony was concluded with fifth grade pupils square dancing, accompanied and directed by Jack Russell.

Next year, Krueger would become director of audio-visual education for the entire school system.