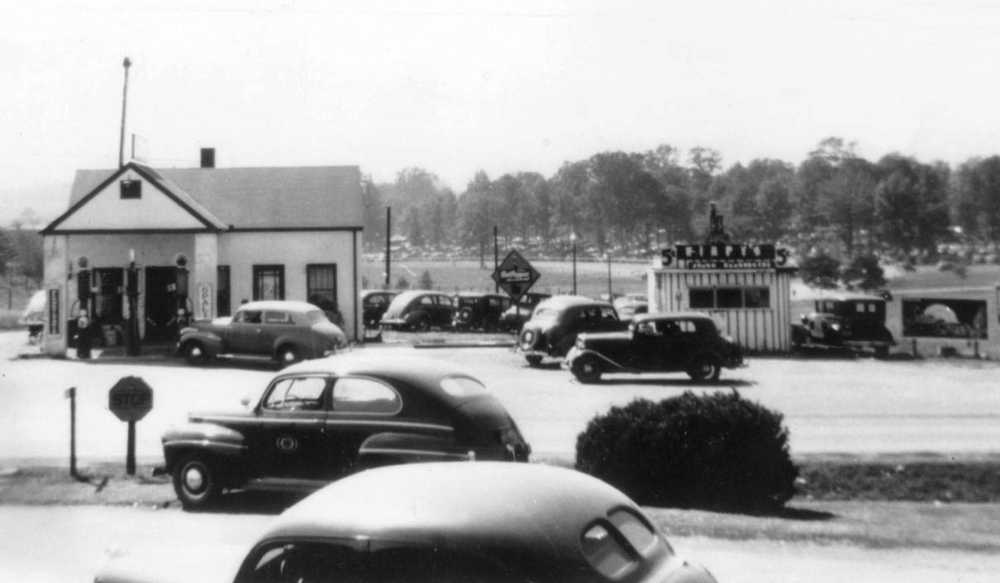 This picture shows Cape Girardeau's original Wimpy's, at right, near the entrance to Arena Park in Cape Girardeau during the 1940s. A sign on the building promotes its five-cent hamburgers.

The small business took its name from J. Wellington Wimpy, who first appeared in comic strips with Popeye in 1929. He was known for stating, "I would gladly pay you Tuesday for a hamburger today."

Wimpy's moved its location over the years; first moving a short distance to the northeast corner of Kingshighway and Cape Rock Drive and later to 506 S. Kingshighway.

Removal this week of Wimpy's refreshment stand from city-owned building at entrance to new city park will clear way for razing of old structure and eventual erection of adequate entrance to park; city will remove building; Wimpy's is removing its equipment across Highway 61 to building purchased from Bill Kuykendall and previously used as garage; new furnishings have been purchased and building has been remodeled and repainted; business is owned by Fred Lewis and his sons, Bill and Freeman Lewis.

Farmers and Merchants Bank, which has placed in service its new main bank on William Street, announces it has exercised its option to purchase a tract at Kingshighway and Cape Rock Drive from Lewis family for construction of banking facility; site is now occupied by Wimpy's, restaurant and grocery outlet, and two houses; buildings will be removed.

Wimpy's history is noted in this story from the Southeast Missourian, Feb. 23, 1992:

IN RESTAURANT BUSINESS FOR 50 YEARS, LEWIS AND WIMPY'S STILL SERVING

After nearly 50 years in the restaurant business, Bill Lewis is still going strong, keeping alive the tradition of Wimpy's.

At one time, Wimpy's - located on North Kingshighway at Cape Rock Drive - was one of Cape Girardeau's few drive-in restaurants. It was a forerunner to the "fast food" chains like McDonald's, which were built on a foundation of America's insatiable desire for hamburgers.

Lewis got involved in the business in May 1942 after his brother, Freeman, purchased a place called Wimpy's near the entrance to Arena Park. Several years later, the business was moved across the highway and it became a family venture operated by Bill, Freeman, and Frank Lewis and their parents.

In the summer of 1973, the old Wimpy's was sold to what is now Boatmen's Bank as the site of a branch facility; the building was torn down and Wimpy's was just a memory.

But about six months later, Bill Lewis decided it was time to go back into the restaurant business and he opened a new place at 506 S. Kingshighway. In contrast to the seven-day a week, 18-hour-a-day schedule of the old Wimpy's, the new version maintains a condensed schedule of Monday through Saturday, serving breakfast and lunch only.

"After we closed, I was going to find a different job, but wasn't successful and had an opportunity to open this business up. I enjoy it, that's the main thing," said Lewis. "I learn something every day."

Since Lewis still enjoys his work, for now, he has no plans to retire. "I could be here another 10 years if I stay healthy," said Lewis. "I don't work that hard, so why should I quit? It keeps me busy sometimes, but it's not that hard."

Lewis admits that he sometimes misses the old Wimpy's, but not the long hours and headaches that went with running the business.

"It was an interesting place, but the problem up there was we had so many employees to worry about," noted Lewis. "And, the customers cause a lot less trouble here."

Many of the customers from the old Wimpy's are regulars at the current location, including some of the kids he used to chase off the parking lot.

"Some kids used to buy a Coke and stay around for two hours; now some of the same guys are back as adults, buying coffee and staying two hours," laughed Lewis.

Sometimes, customers remind Lewis of just how long he's been in the business. He recalled that recently a young lady came in carrying a baby and it dawned on him that he had waited on that baby's grandmother when she was a child.

While Wimpy's still does a steady business, Lewis points out that things have changed a lot since the old place, where the primary food item served was a hamburger.

"When people used to come in, it was not a question of what they wanted, it was just a matter of how many hamburgers they wanted," said Lewis.

Asked how many hamburgers he's served up over the years, Lewis replied: "My calculator doesn't go that high. I've never figured out how to put the right numbers in it.

"At one time, I sold more than McDonald's - but that was a long time ago."

The hamburger business has dropped off considerably at the new Wimpy's, with more customers opting for plate lunches than the traditional burger.

Lewis sells between 200 and 300 hamburgers a week, which is dramatically less than the 5,000 to 6,000 sold each week during the prime years of Wimpy's.

"It used to take a whole cow a week," recalled Lewis. "We'd butcher it and grind it up for hamburgers."

Lewis cooks when he has to, but generally over the years has devoted most of his efforts toward serving customers. "For some reason, I had the mentality to take care of customers, and that's primarily what I did," he remarked.

Lewis admits he's a little amazed how business has held up over the years. "I think it's partly tradition, partly location, and people say I'm one of the few places in town that serves a plate lunch, fixed from scratch every day."

He's been giving some consideration to a 50-year anniversary observance this spring, but so far is undecided on what to do, if anything.

"If I invited all my old customers back I couldn't get them in, and if I gave anything away, I couldn't afford it," said Lewis. "I'm not sure what to do."