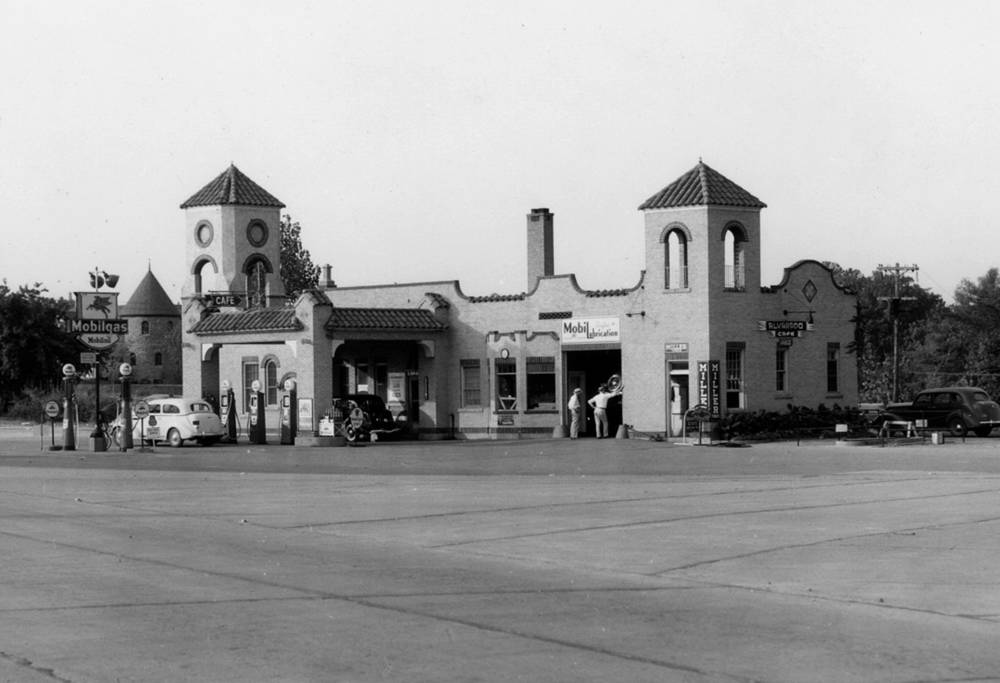 The Alvarado was a service station and restaurant built in 1929 at the intersection of West Broadway and Highway 61 in Cape Girardeau. The photo above was taken in 1934 by G.D. Fronabarger for the 30th anniversary edition of the Southeast Missourian. The photo below was taken sometime later, as the sign on the side is different from the original, Alvarado Cafe. 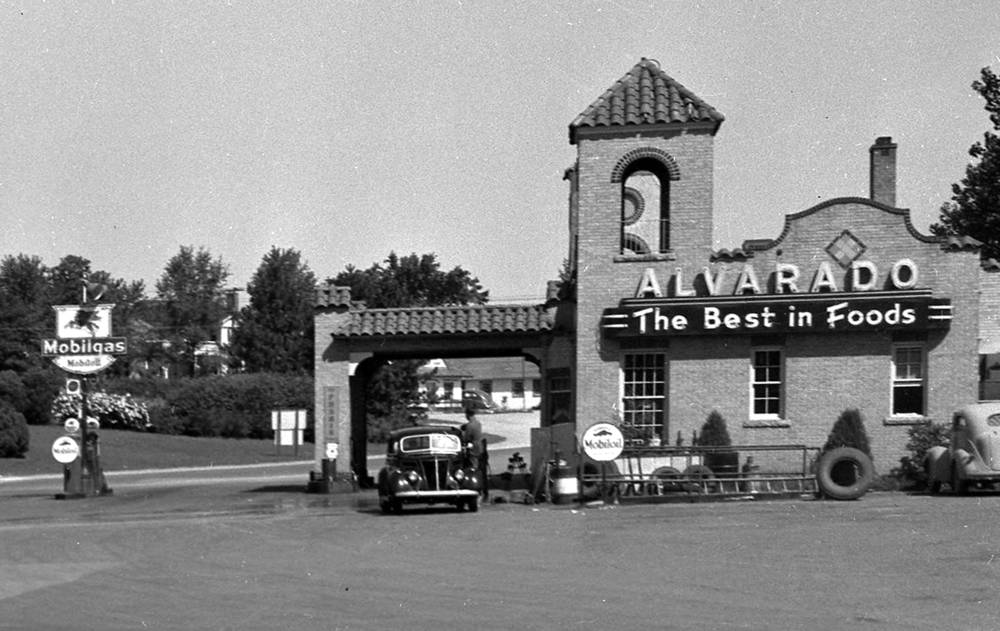 The building fell into disrepair, with the towers removed several years before the final removal in 1971, to make room for another gas station. It has now been replaced, at present by an electronics business.

Sharon Sanders found these items from Out of the Past, along with stories written for the Southeast Missourian:

Plans for construction of building in which will be combined dining hall, restrooms, and complete motor car servicing department are announced by E.C. Smith, manager of Kelso Oil Co., which will erect plant; building will be constructed at northeast intersection of Highway 61 and West Broadway, just west of city limits, at cost of about $20,000.

Plans for Kelso Oil Co.'s new super-service unit to be erected at junction of West Broadway and Highway 61 are released so that contractors might examine them and prepare bids to be received early in July.

A formal opening will be held Friday and Saturday for the "Alvarado," new tourist service unit of the Kelso Oil Co., at the junction of West Broadway and Highway 61. The new station, managed by H.D. Meek, is said by officials of the oil company to be the finest in Missouri south of St. Louis and was erected at a cost of several thousand dollars.

The 12-room structure, designed in effective Spanish style, faces an area of approximately 43,000 square feet, or more than an acre of pavement. An attractive tower with grill work, mission tile roof, and buff colored brick, together with the low rambling style of the building, all lends to an atmosphere unusual but pleasing in building design. The building was designed by Reither and Lindsay, local architects.

Twenty-four hour service is being featured. A dining room seating 45 persons at the tables and five at a soda fountain, is finished in attractive Spanish style, the ceiling throughout the building being beamed with cypress. Vari-colored tile forms the wainscoating and built-in plan for the fountain. The arched windows are made more realistic with attractive drapes. A kitchen also is included, a women's waiting room, a washing and greasing and servicing room for cars, an accessories room, tire service department, and lavatories. Meals are given and short orders received.

The large overhanging canopy has service facilities from five gasoline pumps. In addition to the large area of concrete in front of the building a large gravel area has been provided in the rear and at the ends of the structure for curb service. Approximately 100 cars can be parked in this space. Plans for extensive development of the remainder of the company's property on the site, making it more attractive from a landscape point of view, will be made later, E.C. Smith, manager of the company said. At present a lighting system illuminates the station and area. The building is 90 feet long and 26 feet wide, containing a basement for motor equipment and a furnace for heating the building.

Clearing triangular plot, entrance to Cape Girardeau at Highway 61 and West Broadway, is started; will be beautiful sunken garden.

Paul Menz, attendant at Alvarado filling station, was again held up yesterday; was robbed at same place eight days before.

F. Humphrey W. Woolrych, distinguished artist who spent his life in St. Louis, died there Monday at age 77; one of his paintings hangs in Alvarado station here and depicts Cape Rock

E.C. Smith, general manager of Kelso Oil Co., says that after Jan. 1 dining room and fountain facilities of Alvarado will be closed while remodeling of building is under way.

Large oil painting of historical Cape Rock by late E. Humphrey Woolrych, eminent St. Louis artist, has been presented to State Teachers College; Judge I.R. Kelso, member of Board of Regents at college, who had painting made in order to preserve historical significance of Cape Rock, decided it would be safer housed at college instead of at Alvarado.

Sale last week of Kelso Oil Co. to Socony-Vacuum Oil Co. also included transfer of title to Alvarado, combined service station-restaurant at Kingshighway and Broadway, that was one of principal Kelso outlets; station will be run by Socony-Vaccuum, while restaurant has been leased to Charles Schneider, who has operated it past six years for Kelso firm.

Purchase of Thompson's drive-in on Kingshighway, just south of Broadway intersection, by Charles Schneider is announced; Schneider, who also owns Alvarado restaurant, expects to operate each business separately; purchase of drive-in was from Tom Steinhoff

Mr. and Mrs. J.R. DePriest of Chaffee, Mo., assume management of the Alvarado; the couple has been in the restaurant business for the past 15 years and are owners of the Dinner Bell in Chaffee, which their daughter, Mrs. Kathryn Hancock, operates

A remodeling project that will convert the Alvarado service station and restaurant into a modern-appearing structure with enlarged service station facilities is underway; a new front of modern brick will be added to the building; a canopy, which formerly extended over the service station drive, will be removed; general contractor for the project is Penzel Construction Co. of Jackson.

Old Alvarado, once one of most attractive restaurants in area, is no more; worker for Drury Construction Co. bulldozed final bit of rubble left from its demolition into basement of old structure near intersection of Broadway and Highway 61; old building, with its unusual Spanish architecture, was reduced number of years ago to spare, rectangular building with removal of its towers, and later fell into disrepair.

ALVARADO ONCE POPULAR PLACE IN CAPE

by B. RAY OWEN

Bobbie and Velma Roloff enjoyed their first meal there after their wedding in 1954. "It was a nice place to go and the food was great," said Velma Roloff.

---- Phyllis Heise was there for her sister's wedding reception. It was, back then, quite the place for festivities.

---- The Alvarado, once described as a "west end landmark," had a long and distinguished history.

---- The Alvarado's towers and unique Spanish architecture made it one of Cape Girardeau's most popular cafes.

---- Its location at the city's western edge of Broadway and U.S. 61, now Kingshighway, led many patrons to refer to the Alvarado as the "restaurant out in the country."

---- The Alvarado stood for more than 40 years before it was torn down in 1971, first as a service station and restaurant and later as a motorcycle shop. That's what Bob Bennett recalls.

---- "It was known as Suzuki City.' You could rent a Suzuki motorcycle there," Bennett said. Bennett and others were reminded of that part of Cape Girardeau's past recently when they noticed a photograph of the Alvarado on the Faces & Places page of the Southeast Missourian.

---- It opened in 1929 as a service station and restaurant, complete with its distinctive decorative towers. Owner of the original building was the Kelso Oil Co.

---- During the mid-to-late 1950s, the building was remodeled for a more modern appearance, and a new brick front was added. The towers were removed in the late 1960s, giving the structure a rectangular-shaped look, minus the service station.

---- Bob Hemperly of Cape Girardeau ran the Alvarado one summer. "My father operated a bus line at the Alvarado," said Hemperly. "He leased the building, and one summer, he turned the Alvarado over to me. It was an interesting summer."

---- "I remember the Alvarado," said Frank Horton, of Sarasota, Fla. "My father was involved in its early operation." Horton, who operated Horton Sales Co. in Cape Girardeau before retiring to Florida, explained that his father, Earl Horton, and a friend, Edwin S. Smith, were chemists at Herculaneum when they decided to go into business, which became the Alvarado. Smith eventually became general manager of Kelso Oil. Horton interests acquired Kelso Oil in the 1950s.