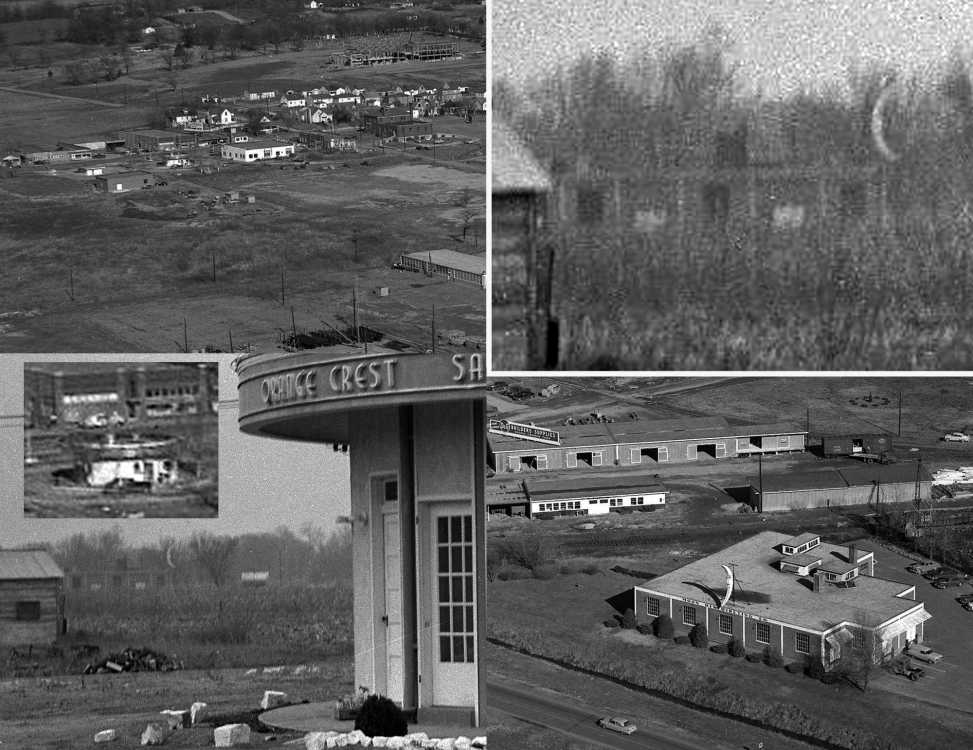 We have photographic evidence which shows that Pfister's Drive-In, 2125 Broadway, was originally the Park-N-Eat, 2300 Broadway, in Cape Girardeau. The building had not moved, but the address was changed.

Here is a link to the original blog with a picture of the Park-N-Eat.

G.D. Fronabarger took the aerial photo over Kingshighway and Independence looking toward the north which shows Moon Distributing Co. with its distinctive moon sign in the lower right corner.

The lower left quadrant shows the east side of the Park-N-Eat building that Frony photographed sometime after the drive-in restaurant was built in 1940. The view is looking south. The small, inset photo is an extreme enlargement of Pfister's taken from the aerial photo, above, just left of the large white building on Broadway. The upper right quadrant is an extreme enlargement of the Moon building behind the Park-N-Eat.

Construction of Cape Catholic High School is visible in the upper left quadrant, upper right corner, to the north on Forest Street, off Caruthers Avenue. This would date the photo in late 1953 or early 1954 as it appears to be the winter season. Classes began at the school in September, 1954 with 211 students.

What mystery? When I originally posted a picture of Park-N-Eat with a description that I thought was accurate, readers commented that it looked like Pfister's Drive-In. Since Park-N-Eat opened in 1940 with a newspaper story and advertisement noting the address at 2300 W. Broadway, I looked across the street from the Masonic Temple, 2307 Broadway, and saw Choctaw Park. The drive-in was listed in the 1945 city directory, but not in the 1949 issue. So I concluded that the circular restaurant was torn down.

I was discussing Pfister's with our librarian, Sharon Sanders, when she pointed to the photograph of Park-N-Eat and a faint outline of a building behind it. "That looks like Moon Distributing," she said. I agreed, remembering the business with its iconic moon sign when it was on Nash Road.

This discovery blew a hole in my theory about Choctaw Park. Sharon wondered if the building had been moved. I didn't think so, since nothing was built in its place.

Soon she produced an aerial photo that Frony took which suggested that somehow the street numbers on west Broadway had changed, sometime after Park-N-Eat opened and it later became Pfister's Drive-In.

So I checked a few more city directories and confirmed this hypothesis.

In the 1937 directory, Caruthers Avenue is the last cross-street west on Broadway. The last address was a house at 2106 Broadway. In 1949, Clark Avenue is listed, west of Caruthers, and the addresses begin in the 1900s, rather than 2100s, to the west of Caruthers. Broadway Prescription Shop is 1900 Broadway. Medical Arts Building is 1912. Clearly the numbering had changed over a few years as construction moved west on Broadway.

A 1969 Southwestern Bell telephone directory lists Pfister's Circle Drive-In as well as an ad for the restaurant: Home of Dixie Q Chicken and Pig on a Stick.

G.D. Fronabarger wrote this in his business column published June 26, 1977:

Demolition of the old Pfister's restaurant building in the 2100 block of Broadway began Thursday (June 23, 1977) to make way for another quick food type restaurant. A franchise has been purchased by Robert Collins and Wilson Viar of Memphis for operation of a Danvers, Inc., restaurant to be built at the site by Cape Realty Co., and leased to the holders of franchise. The pair also has the franchise for a similar outlet to be built at Carbondale, Ill.

At present, anyone who misses Danver's will need to go to Memphis to find the nearest of six locations.

Park-N-Eat at 2300 Broadway, one of Southeast Missouri's more popular curb service drive-ins, has been acquired from Mr. and Mrs. George M. Campbell by M-P-M Enterprises, operators of drive-ins in Illinois and Louisiana; they will operate it as Miller-Parkmore Drive-In; Mr. and Mrs. Campbell, who have had establishment for 7 years, will take vacation of two weeks in South, and upon their return will operate filling station adjacent to the place.

William H. Pfisterer, 42, owner of Pfisterer's drive-in establishment, 2125 Broadway, dies suddenly of heart attack at family home; Pfisterer was born in Cape Girardeau; he attended Central High School and Chicago School of Engineering; in 1935 he married Mildred Miller, who survives, along with his father and brother; following World War II, when he served in Army, he went to Louisiana and engaged in ice cream business; he returned to Cape Girardeau in 1947 and "purchased the drive-in which he operated at the time of his death."

Thanks to Ray Boren for this comment he posted to the original blog:

I can say park-n-eat and pfisters were both in the same building. park-n-eat before 1947. pfisters after 1947. My dad's house was directaly across the street from pfisters. His house number was 2324 broadway. Today that lot number is 2126. I walked across broadway dozens of times to get that great pfister burger.Ray Boren