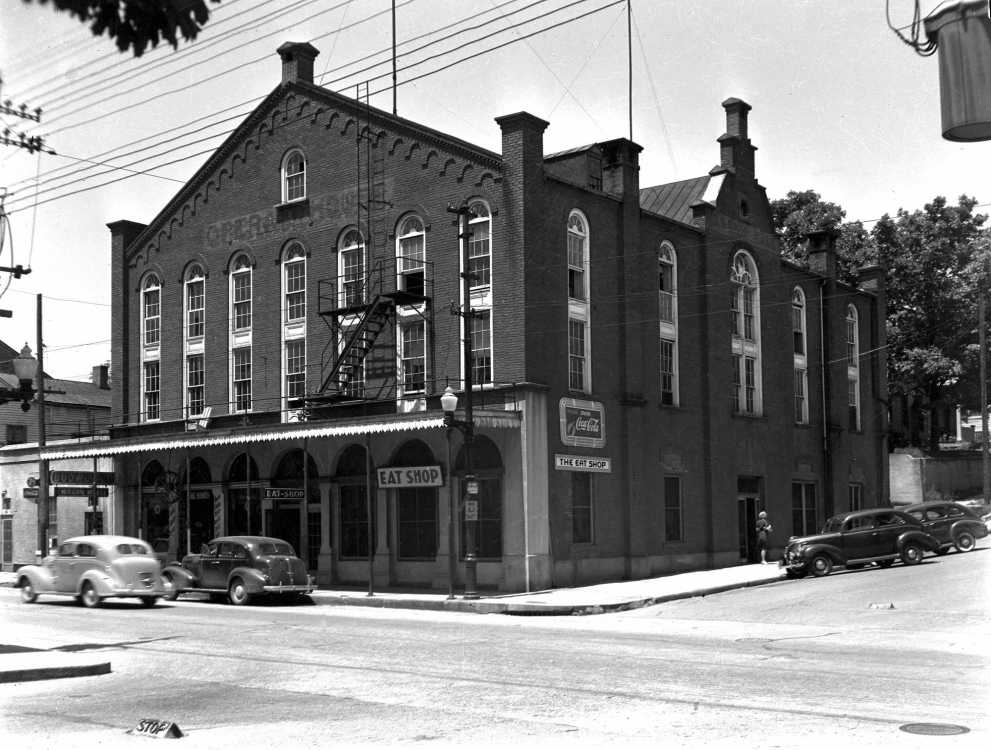 The Opera House sign is faintly visible above the Broadway side of the building in this photo taken by G.D. Fronabarger in the 1940s.

Built in 1868 by the Turner Society, the building was acquired in 1888 by the local Masonic Lodge. The Masons used it as their temple until they built a new facility at the southeast corner of Broadway and Spanish in 1891. That building later was Keys Music Store for many years. On the Lorimier side of the opera house building, a lighter shaded area above reveals where Masonic Hall was once painted.

Before the Opera House was built, the site had been the first Cape Girardeau tavern, a log structure built in 1806.

The Wagon Wheel Saloon and Restaurant, as well as the Eat Shop, occupied space on the first floor of the old opera house during the 1940s.

This item from June 7, 2004 Faces and Places, Southeast Missourian:

The Wagon Wheel Saloon and Restaurant was owned by Emil and Linda Busch from 1941 to 1947. The Busch family and their four children, Virginia, Gene, Maxine and Buddy, lived around the corner at 220 N. Lorimier. The thriving restaurant served employees of the shoe factory and the Southeast Missourian. During the war years, cadets from Harris Field were regulars. The establishment was renowned for its family atmosphere. On the far right are two doors; the first one led to the steps of the second floor of the Opera House; the second led to the Eat Shop, owned and operated by the Green family and later the Hill family. Richard Barnhouse opened The Petit N'Orleans Restaurant [in 1955] after purchasing the Wagon Wheel and the Eat Shop in 1947.

[Barnhouse bought the building in 1961 from First Federal Savings and Loan Association, which had acquired the property in 1959 with the intention of converting the site into a parking lot.]

[Katie O’Ferrell’s Publick House was opened in the building by Mark Dirnberger on March 1, 2014 after the building sat vacant for four years. The previous business, N’Orleans restaurant, closed in June 2009.]

Mrs. J.J. Cunningham and Delia Kimmel, proprietors of Eat Shop, 302 Broadway, dissolved their partnership last week, each going into separate business for herself.

Deeds Kimmel has purchased the Eat Shop, 302 Broadway, from Marie Cunningham; the two women opened the place together eight years ago.

Painters begin to redecorate the exterior woodwork of the old Opera House building, 302 Broadway; the woodwork is being painted green; the building is occupied by the Eat Shop and Raybourn grocery store.

Delia Kimmel has purchased the Eat Shop, 302 Broadway, from A. Moi, who bought the establishment only four weeks ago from Marie Cunningham; he plans to return to his home in St. Louis.

Ideal Cafe opens at 302 Broadway, location of former Eat Shop, with J.D. Vancil and his father, Virgil Ancil, in charge; food establishment will be operated much along the former lines, except that small sandwich bar at rear of main dining room will be included; cafe will be open seven days a week and in evenings.

Mr. and Mrs. Wayne Freeman of Cape Girardeau have purchased Hill's Grill, 816 Broadway, from Mr. and Mrs. A.C. Hill of Cape Girardeau; Freeman, who has operated Cottage Grill for past year, is well known here; before establishing grill, Mr. and Mrs. Hill operated Eat Shop at 302 Broadway; Hill plans to take his family on vacation in Wisconsin before making any definite business plans.

Seven Cape Girardeau establishments are licensed to sell liquor by the drink beginning Jan. 1 for six-month period, until start of new fiscal year July 1, when licenses will be renewable for full year; establishments receiving licenses are the Last Chance, the Airline, the Rainbow Room, Good Hope Tavern, the Wagon Wheel, the Blue Note, and Sprigg Street Tavern.

Letter from Presbyterian Church protesting liquor-by-the-drink establishment nearby was filed during meeting of City Council yesterday; City Attorney Albert M. Spradling Jr. read letter from church session, its governing body, protesting provisions of city's ordinance setting distance of liquor places at 100 feet, the minimum, instead of 300 feet, the maximum; in particular, church is protesting licensing of Wagon Wheel restaurant on Broadway which, according to letter, is slightly more than 100 feet from church sanctuary.