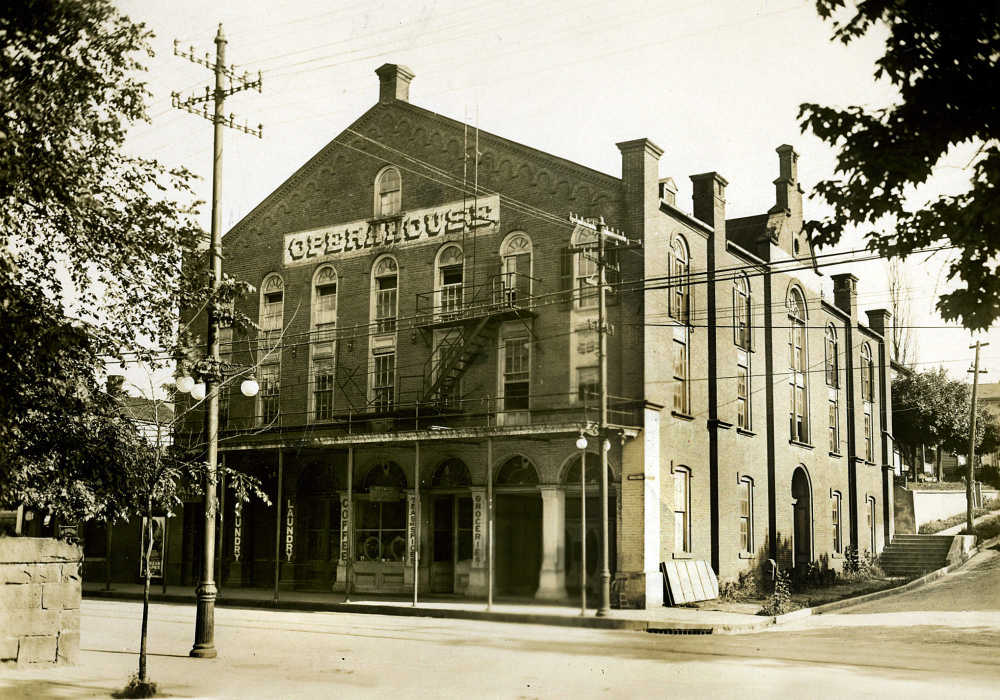 This picture of the old Opera House at Broadway and Lorimier Street in Cape Girardeau was taken around 1918, according to a movie poster that can be seen at left for "Tarzan of the Apes" which was released that year. Grocery store signs are at right. Laundry signs are visible, as well as a small sign that reads Lee Don.

This item from Out of the Past was published in the Southeast Missourian:

After 15 years in business in Cape Girardeau, Lee Don, Chinese laundryman, is getting ready to leave for St. Louis with return to "Flower Kingdom" in mind; 40 years ago he came from China to California; he was youngster then, and has grown to matured manhood in America; he was married in California nearly score of years ago; when he came to Missouri, his wife and children remained with his parents at San Francisco; he has not seen his family for nearly 16 years, his parents, wife and children having returned to China 14 years ago.

The old Opera House was built as Turner Hall.

A story in the Dec. 10, 1968 Southeast Missourian details the landmark on its 100th anniversary:

It was Dec. 10, 1868, a note of obscure origin in The Missourian files tells us, that work was begun on Turner Hall, later known as the Opera House. The huge, square-pillared brick building with finely-arched windows was to be more than a meeting place for the German Turner Society--it was for many years to be a center of culture and recreation for the entire community.

Facing Lorimier street at the northwest corner of its intersection with Broadway, Turner Hall occupies the site of Charles Ellis' public house, the first hotel in Cape Girardeau (built about 1805).

It is remarkable that, important as the Turner Society was in Cape Girardeau, as evidenced by the imposing building, there is no information in standard reference works for this area as to when the society was organized, nor, indeed, when it was disbanded.

Turner Societies, or Turnvereins, were organizations of German immigrants and specialized in gymnastic exercises and other recreational activities.

In 1888, Turner Hall was purchased by the Masonic Lodge for $3,000, and the name was changed to Opera House and Masonic Hall. It might be assumed, then, that the Turner Society either had been disbanded or at least had ceased to function widely. Goodspeed's History of Southeast Missouri, published in 1888, does not mention it among active organizations.

In 1927, when the Opera House was undergoing some remodeling, a pioneer carpenter, Phillip Steck, recalled the impressive ceremonies of the cornerstone-laying for the building. It was Mr. Steck's memory that Turner Hall was built in 1864 or 1865, but other authorities are generally agreed on the 1868 date, and the economic conditions obtaining at the end of the Civil War would seem to support the later date.

Mr. Steck described the Turner Society as being made up of 200 or 250 men representing the leading families in the life of the town at that time; it was THE most important social organization of the community and very popular. In the box of the cornerstone, he recalled, were placed a group picture of the Turners and several newspapers, in addition to several other objects.

Brick for the building, Mr. Steck said, was made in a brickyard at the corner of Good Hope and Lorimier streets later known as the Schwepker property, and the windows and doors were made on the premises.

Nicholas Gonner, the man who planned Turner Hall, was a native of Luxembourg who came to Cape Girardeau to join friends from his homeland.

Mr. Gonner was a civil engineer, as well as an architect and contractor, and in 1870 was the author of a series of newspaper articles advocating the building of gravel roads to encourage rural land development.

Before he left Cape Girardeau, Mr. Gonner also erected St. Mary's Cathedral, and an unknown number of other buildings, many of which are probably still standing, their identity unknown.

Turner Hall has long been admired by architects and builders; it is said to display the finest brickwork in this area. It is typically German in its sturdy grace; the shutters which now adorn it were added when it was given a "French" air by its present occupant, Richard Barnhouse, who established a restaurant with a kind of New Orleans atmosphere on the lower floor in 1955.

Mr. Barnhouse and his associates, to their everlasting credit, saved the historic building from being razed to make way for that ubiquitous mark of Progress, a parking lot.

In the once-elegant theater in the upper portion of Turner Hall, long-since fallen into decay, there appeared amateur theatricals put on by debutantes, society matrons, young gallants, and stalwart business and professional men; lyceums; traveling drama companies; and concerts--band, orchestra and vocal. Cole Younger once lectured there on his 14 years as an outlaw, and "Blind Boone," a gifted Negro pianist, filled the walls with matchless music.

In the years when Dr. C. E. Schuchert owned it (1912-1921), there were many stirring concerts by Schuchert's Band, which served as the Sixth Regiment Band during World War I and was a forerunner of the Cape Girardeau Municipal Band. Boxing matches were held there, also, harking back to Turner gymnastics.

It is said that in the early years there was an opening in the north wall, at the back of the stage, and on hot summer evenings customers were wont to sit outside in a beer garden, sipping suitable refreshments, while entertainment was presented from the stage. The opening, bricked-up, is visible near the north-northwest corner of the building, although the stairway which led to the theater from the south, or Broadway side, has long ago vanished.

In later years, however, the coming of movies and other forms of entertainment diminished the need for Opera House facilities, and the stage-auditorium was abandoned. Apartments were made in the upper portions of the building, while various business enterprises have occupied the lower floor.

In 1904, the first issues of The Daily Republican by Naeter Brothers were produced in the southwest corner rooms. A Chinese laundry was operated in the building for many years, and almost continuously there has been an eating place of some sort there.

In the solid dignity of its architecture, the dauntless craftsmanship of its construction, and its determined continuing service, Turner Hall stands as a symbol of that which is strong an abiding in Cape Girardeau's heritage. As the city grows, sturdy old buildings, such as this, both public and private, provide reference points by which to evaluate what is called progress.

An Internet search revealed that Turner Societies still exist in the United States, including the St. Louis area among more than 50 groups.