Wood blocks removed from Broadway in 1917 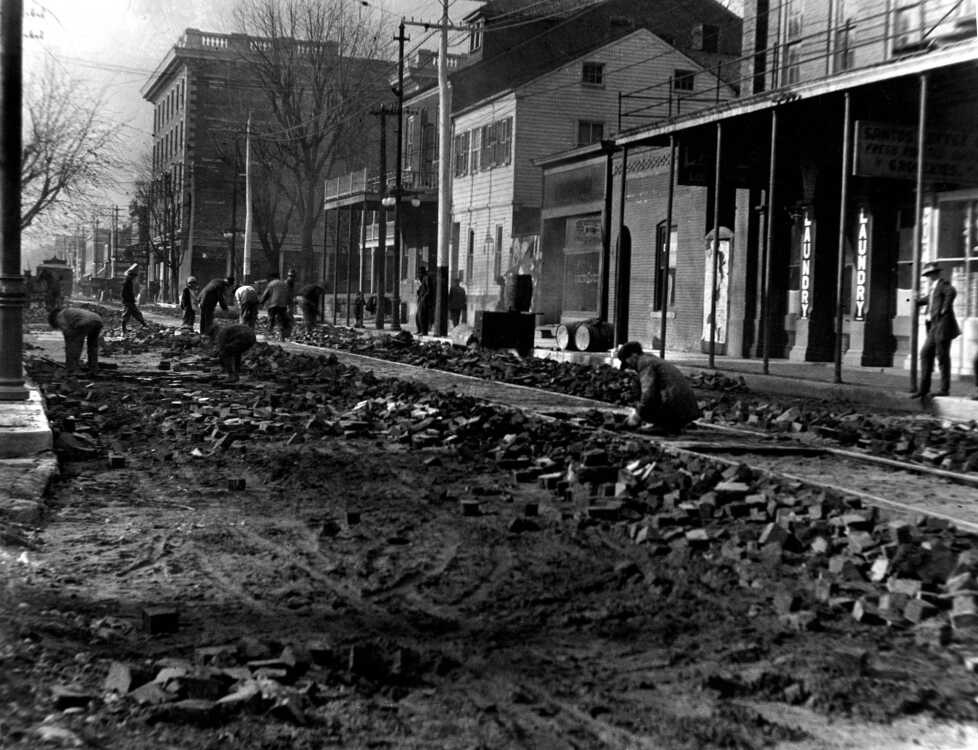 This picture shows wood blocks being removed prior to concrete paving in the 300 block of Broadway in Cape Girardeau, apparently in early 1917, according to this item from Out of the Past that was published in the Daily Republican:

City Council passes resolution ordering paving of portion of Broadway with concrete; street, between Lorimier and Middle, where wood blocks were recently torn up, will be improved, if property owners along Broadway do not object to plan; resolution is also adopted declaring it necessary to pave Morgan Oak, from Aquamsi to Pacific.

Notice the old Opera House at right. In the background on the left is the Himmelberger-Harrison building, finished in 1908, at the corner of Broadway and Fountain Street. The Marquette Hotel would be built years later and finished in 1927.

Our librarian, Sharon Sanders, found the following Out of the Past columns which detail the paving of Broadway:

Three resolutions were passed Monday night by the City Council authorizing the paving of Broadway from the levee to Middle Street; Broadway should be paved yet this fall.

Judge Robert Ranney grants a temporary injunction to property owners on Broadway against the letting of a contract by the city council for the paving that street between Lorimier and Middle streets with wood blocks.

After voting last night to pay Kettle Rivers Quarry Co. for its work of paving Main, Themis and Independence streets with creosoted wood blocks, the Cape Girardeau City Council passed an ordinance accepting the bids of Kettle Rivers for paving Broadway from Water to Lorimier streets.

E.F. Regenhardt has been selected by the Cape Girardeau City Council as the inspector for the paving work on Broadway; the hill part of Broadway will be paved with granite blocks and, as Regenhardt has had so much experience in rock work, it is thought he will make an excellent inspector.

Broadway will get brand new granite paving blocks instead of secondhand material from St. Louis; this news was announced in the council meeting last night by a representative of the Kettle Rivers Quarry Co.; the blocks will be quarried at Knob Lick, Mo.

Street paving on Broadway hill and elsewhere is receiving a great setback because of the delay in lowering the lines of sewers on either side of the Broadway hill.

Edward F. Regenhardt leaves in the morning for Knob Lick, Mo., to inspect the granite blocks being quarried there for use in paving Broadway hill; he will probably be away several days.

Friction arises in the morning between paving inspector Edward F. Regenhardt and city engineer C.W. Hawley, which results in the former handing in his resignation personally to Mayor M.E. Leming; the trouble arises over when pavers drive loaded carts of concrete over the concrete roadbed on the lower block of Broadway hill; Regenhardt objects that the concrete bed hasn't yet had time to set.

The city fathers will consider using wood blocks for the crossings on two blocks of Broadway hill, rather than the granite blocks specified; the wooden blocks would offer better footing for pedestrians at Main and Broadway and at Spanish and Broadway.

Judge R.G. Ranney has dissolved a temporary injunction against the paving of the blocks of Broadway, between Lorimier and Middle streets, saying the City Council acted within its authority in ordering the paving; 13 property owners had protested the improvement.

City Council passes resolution ordering paving of portion of Broadway with concrete; street, between Lorimier and Middle, where wood blocks were recently torn up, will be improved, if property owners along Broadway do not object to plan; resolution is also adopted declaring it necessary to pave Morgan Oak, from Aquamsi to Pacific.

Today is undoubtedly Reido Nebel's lucky day; dropping from ladder raised 25 or 30 feet in air onto granite paving on Broadway, he suffers nothing more than a few bruises to his body and slight cut on his right arm; Nebel, who is employee of Missouri Public Utilities Co., with Robert Hyatt, was at work decorating for Southeast Missouri High School Annual Meet to be held here tomorrow and Saturday, and was fastening flags on wires when accident occurred; Nebel returns to his work 10 minutes after fall, little worse off for accident, except that he is somewhat nervous.

Laying of paving at corner of Main and Broadway begins; wire netting that is to be put on bed of street is being put in place, and concrete is poured on this netting; corner will be completed first before work on street proper starts; this is being done to allow traffic to proceed from Water Street up Broadway.

Contracts for street paving in Cape Girardeau, totalling $6,315.50 were let to Frank W. Keller, local contractor, at meeting of City Council yesterday; streets to be paved are Broadway, from Main to Water; Themis, from Main to Water; Water, from Broadway to Themis; and Morgan Oak, from Sprigg to Frederick.

Cape Girardeau is facing largest improvement program in city's history; City Council has approved program for this year that will include expenditure of nearly $400,000 in various projects in all parts of town; projects include completion of West End sewer, installation of sanitary sewer to abate Normal septic tank nuisance, street paving, sidewalk construction, street widening and replacement of wooden blocks on Broadway with paving.

Estimates of cost of paving between street car tracks on Broadway, from Main to Pacific, are being prepared by City Engineer Ed Sailer and will be submitted to City Council at next meeting; petitions will be circulated among property holders on Broadway to get enough signers to secure the improvement; wooden blocks on Broadway hill, between Main and Lorimier, are to be removed and replaced with concrete, four inches in thickness.

Paving of space between street car tracks on Broadway between Main and Pacific will be delayed until after fair, Sept. 18, it is announced; delay in getting shipment of re-enforcing for work is reason for postponement; contract for project was let in July to F.W. Keller, local contractor; Keller says he didn't want to start paving work and have city torn up during fair; city officials agreed to delay.

Preliminary work has started for paving of space between street car tracks on Broadway from Middle to Pacific; wooden blocks, which for long time have been nuisance to traffic, are being removed and employees of street car company are installing new ties and rails preparatory to the paving.

Final touch is put on paving of space between street car tracks on Broadway from Main to Pacific, and last stretch between Main and Lorimier will be opened for traffic within 10 days; this paving was started three weeks ago; several other paving projects are to be completed before winter, say city officials.

Total cost of paving of space between street car rails on Broadway from Main to Lorimier, and from Middle to Pacific, was $3,531.60, according to final report of engineering department submitted to City Council; work of contract, F.W. Keller, was approved and tax bills are to be issued for project.

Granite cobblestones of Broadway hill, installed in first decade of century to provide good footing for horses, may give way to modern concrete pavement next summer if plans of city officials materialize; inquiries are being made of property owners on two-block stretch of Broadway from Main to Lorimier to see if they are agreeable to proposed surfacing plan; city has unofficially agreed to stand part of cost from parking meter receipts.

City officials are awaiting return of petition before taking any action toward having plans and specifications drawn up for resurfacing Broadway hill from Main Street to Lorimier; it had been proposed that old cobblestones on hill be removed and that two blocks be surfaced with concrete; in presenting proposal, city said it would share in cost and would request that Cape Special Road District also participate

In replies received so far, Broadway property owners from Lorimier to Middle have given majority approval to city's paving proposal for two-block stretch; subject was put to 24 resident property owners in those blocks in letters sent out by Mayor Walter H. Ford; he explained city and Cape Special Road District would help in work; with letters was reply sheet on which owners were to mark whether they approved or opposed proposition.

Problems of paving, and effort to share projects among three business districts, come up before City Council, along with multitude of other municipal matters; commissioners, ousted from their meeting room by work of city assessors, meet in Mayor Walter H. Ford's office to hear number of ordinances read, discuss street paving, pass on monthly reports, and care for other affairs; paving gets most discussion, with City Engineer John R. Walther noting petition has been filed by four large Broadway property owners asking repaving of hill from Lorimier Street to Main Street.

Crew of workers begins to break concrete out of center of Broadway, preparatory to removing old streetcar rails and resurfacing this section of two-block stretch from Lorimier to Middle streets; contract for paving job has been awarded to C.A. Hood Construction Co.

Granite cobblestones, which have formed most of the surface of the Broadway hill from Main Street to Lorimier Street, will be removed and a concrete surface laid in the two-block stretch under plans adopted last night by the Cape Girardeau City Council.

Something of a record in the way of concrete pouring is established by the Central Materials Co. in the morning as its workers slap down a strip of pavement 14 feet wide and 175 yards long within six hours, to just about conclude the paving of Broadway hill.