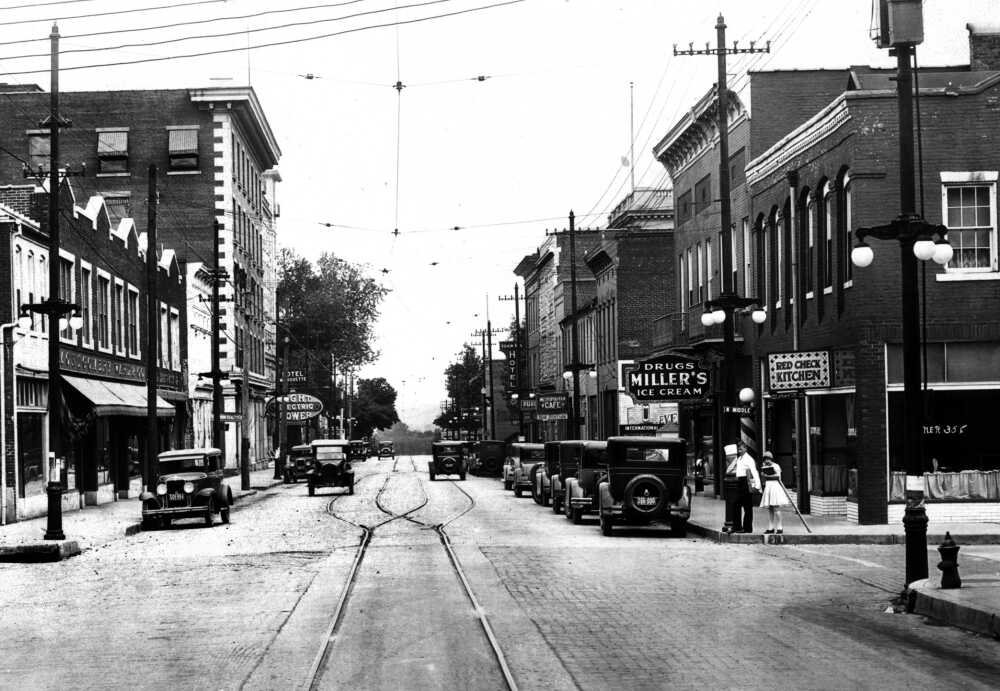 Two school children wait to cross Broadway at the Middle Street intersection in this picture taken in 1929. Behind them, the Red Check Kitchen provided dinner for 35 cents. Next door to the east is a barber shop. Other stores with visible signs include the I. Ben Miller drug and ice cream store, Metropolitan Cafe, Greyhound Bus Station and Hotel Idan-Ha. Across the street on the north side of Broadway is Montgomery Ward & Co.

After 36 years in business on Main Street, I. Ben Miller moved his drug store and confectionery to 431 Broadway on April 28, 1928. That same day, he sold his ice cream manufacturing plant Midwest Dairy Products Corp., in order to devote himself full time to the drug business.

Ten years later, Miller was still serving his clientele at his Broadway store. In fact, on the day he died, Feb. 19, 1938, Miller put in a full day at the store. He was 74 years old.

Our librarian, Sharon Sanders, found these items in Out of the Past:

It is reported that J.C. Penney Co. has contracted for 15-year lease on property now occupied by I. Ben Miller store on Main Street and will erect thereon modern store building as soon as possession can be had; it is said that Juden estate, owner of property, has given Miller six months in which to vacate; Miller store has been at that site for more than 30 years.

I. Ben Miller yesterday opened his new drugstore and confectionery at 431 Broadway, section of town which was "West End" of Cape Girardeau when he began his business career on Main street 47 years ago; moving to modern building, equipped with specially designed fixtures, Miller left Main street building he had occupied continuously since he started business for himself.

After span of 57 years, there no longer will be I. Ben Miller Drug Store in Cape Girardeau; Miller family announces retirement plans for drug store and its supplementary food service at 429 Broadway, effective at close of business Friday; first Miller Drug Store was started by late I. Ben Miller on Main Street, where Penney Store is now located; it was moved to present location in 1928, since when it has been in active charge of Edwin A. Miller, a son.

Purchase of I. Ben Miller building, 429-433 Broadway, is announced by families of Robert C. Bauer and Alvin "Bud" Haas; purchase was made from Miller family; drug store and confectionery operated in building since 1928 by Miller family were closed last weekend, and drug stock and equipment will be sold; building was bought as investment and won't be occupied by new owners.

Harlan J. Mueller and Clarence Haertling, proprietors of Broadway Variety Store, 437 Broadway, have announced leasing of west half of former I. Ben Miller building, 433 Broadway, and plans to move their establishment to new quarters soon; new location, next door to present site of store, will allow much more room and will permit installation of new merchandise lines.