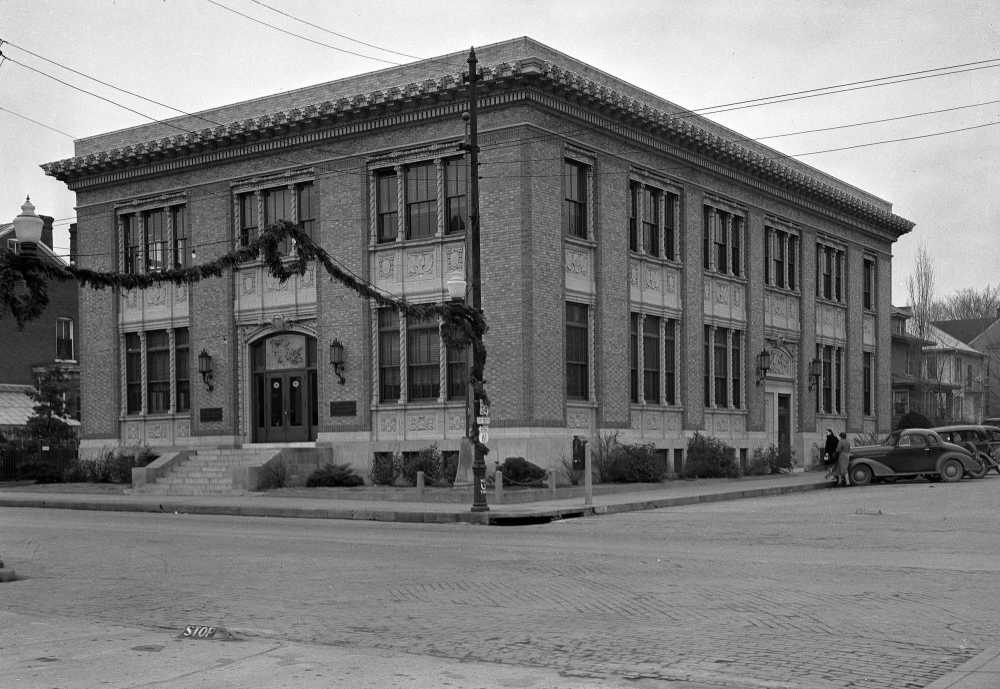 This picture of the new Southeast Missouri Telephone Co. building was taken by G.D. Fronabarger probably during the late 1930s. The company moved into the building in 1930 from across the street. The structure at the northwest corner of Broadway and Ellis Street looks very different than it does today.

A street-level stop sign is in the foreground, left, and another is across Broadway. Notice the Christmas holiday decorations over Broadway. The automobile parked at the right appears to be a 1938 or 1939 Plymouth coupe.

At near midnight tonight when the traffic load is light, the actual "cut-over" will be made and testers will be on the job to test and remedy the least indication of trouble on any circuit. In an instant, the operators leaving their seats at the board in the old building on the south side of Broadway and North Ellis street, who are now able to handle 260 calls an hour, will be supplanted by operators at the new switchboard in the new building across the street, who will be able to handle nearly 700 an hour.

At 10 o'clock this morning, the first call made over the new exchange was placed by Mayor Edward L. Drum of Cape Girardeau to Gov. Henry S. Caulfield of Missouri, who is at a governors' conference at Cedar City, Utah. In a lapse of time that seemed almost insignificant, the toll operator announced that Missouri's chief executive was at the other end of the wire more than a thousand miles away, ready to greet the mayor and extend his congratulations to the city.

A reporter for The Missourian listened in on the conversation from the terminal room on the first floor:

"Hello, Governor Caulfield, this is Mayor Edward L. Drum of Cape Girardeau. We are inaugurating telephone service on a new exchange today in Cape Girardeau and I take pleasure in greeting you to celebrate the occasion."

"Thank you Mayor Drum. It is indeed a pleasure to have you call me away out here in the desert. I can hear you as well as if you were in the next room."

"I can hear you clearly, Governor," replied Mayor Drum.

"Give my regards to Fred Naeter, Mayor."

"He is standing right by my side, Governor."

The governor concluded, "I am so glad you called."

"It has been a great pleasure, Governor. Goodbye!"