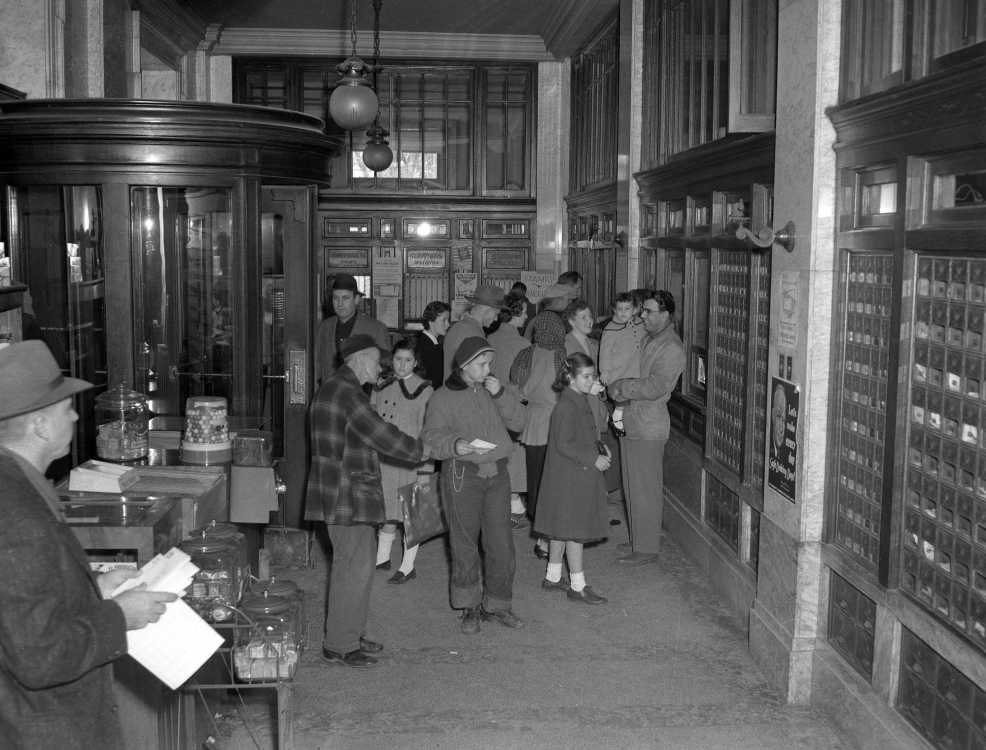 This photograph by Garland D. Fronabarger was published Dec. 19, 1955 in the Southeast Missourian. It shows the interior of the old post office in the Federal Building in Cape Girardeau, located at the southeast corner of Broadway and Fountain streets.

"Cape Post Office is busy place. A crowd in a corner of the lobby on Saturday, when business continued to be rushing. Parcels and letter mail were being sent ouit, with many postage stamps being sold."

A poster on the wall has a picture of President Dwight D. Eisenhauer: "Let's make every day Safe Driving Day." This was a program started in the middle 1950s. Its objective was to have 24 hours without a single traffic accident, and that would impress upon citizens to drive safely throughout the year.

On the left side of the picture is a revolving door.

"I have been told it was the first revolving door in Cape Girardeau. I also heard that the kids of town thought of it as an amusement ride when it was first installed, going around and around in it."

Following is a note from our files:

The new-fangled revolving door at the entrance of the Federal Building, which twists around and swipes us hard in the back before we are thrown out on one side or the other, has been playing havoc with a lot of us country people.

Four elderly ladies who wanted their mail and knew that the carriers were not delivering it, crowded into one compartment and began shoving. The rear panel hit the last lady and jolted the forward panel back to crash into the front one. Then the pesky thing stopped, and they were cooped up like so many rats in a trap.

The post office remained in that building until the current post office was built in 1965. The Federal Building was razed in 1967 to make room for a new federal building.