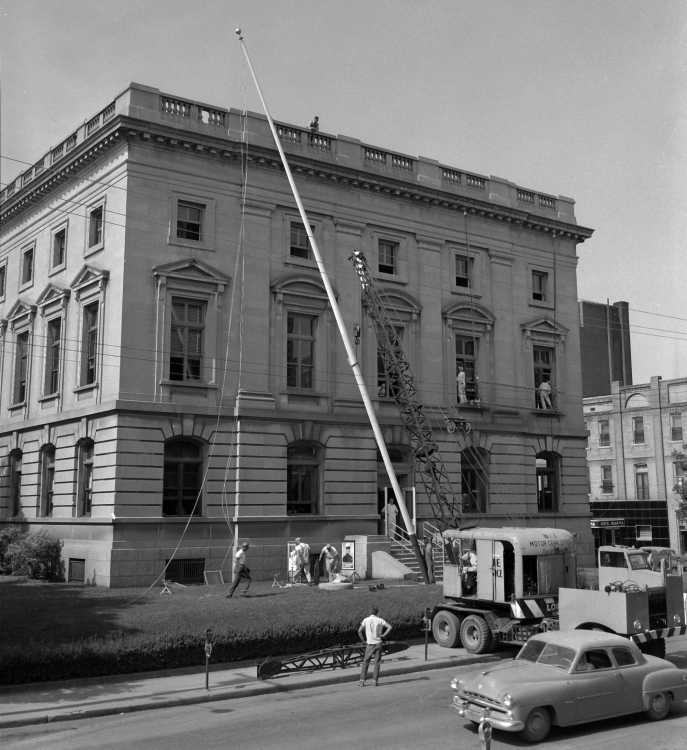 The old post office in Cape Girardeau was situated at the southeast corner of Broadway and Fountain streets.

This Federal Building was built in 1908-10 and housed the federal courtroom and offices as well as the post office.

The post office remained in that building until the current post office on Frederick Street was built in 1965.

The Federal Building was razed in 1967 to make room for the current building on that site. It was used as a federal building until the opening of the Rush Hudson Limbaugh Sr. U.S. Courthouse on June 2, 2008.

Our librarian, Sharon Sanders, found this information about the building:

When the first pole was placed atop the building in 1909, the construction boss had no flag to fly from it. He borrowed the flag that flew at The Daily Republican (now Southeast Missourian) office and flew that one.

---Charley Bushong, superintendent of the new federal building at the corner of Broadway and Fountain Street, Thursday raised the flag staff on the big structure and ran The Republican newspaper's flag up to the breeze; the staff, mounted on top of the big stone edifice, is 40 feet tall.

---- Charles Buschong, superintendent of the new federal building, hauls a flag staff to the new building, and the work of setting it will begin next Monday; it isn't easy to find such a stick of timber, and this one came from a St. Louis dealer who saved up some of the big timbers from the World's Fair; it measures 2 feet square and more than 40 feet long.

Read about the revolving door in this blog: