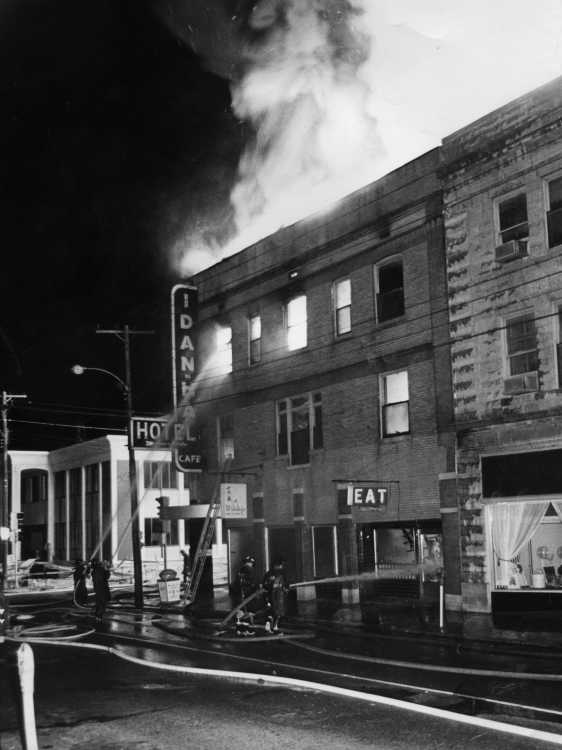 A general-alarm blaze early this morning destroyed the main section of the 65-year-old Idan-Ha Hotel which had been vacated only two weeks earlier after being declared unsafe.

The fire also destroyed a dress shop and restaurant beneath as well as badly damaging the hotel's remaining sections and some of six other nearby businesses.

No serious injuries resulted. The 110-room hotel had been closed only two weeks earlier by state officials, mainly because of the fire hazard. Numerous elderly residents had made it their permanent residence beforehand.

The cause of the fire, which spread rapidly, is not known, Fire Chief Carl J. Lewis said.

The blaze destroyed the northeast section of the hotel, Milady's Shop, and the Rainbow Coffee Shop. All are located just west of the southeast corner of Broadway and North Fountain.

Fire dispatcher Paul Mills took the first report from an unidentified passer-by at 1:40 a.m. Mr. Mills said he had just gotten another call and the men were awake.

Apparently just after the first report, police turned in a report also. Ptlm. James A. Crites reported he discovered the fire after making a check on smoke seen in the area. He said the fire was well undeway in the midsection in the top floor above the lobby. Jack Burris, a night watchman, had seen the smoke at Lorimier and Broadway and reported it to Ptlm. Crites.

Firemen found the hotel blazing out of control. Station No. 1's truck arrived first. Chief Lewis arrived about two to three minutes later. He ordered all trucks but one to the scene, and all men called on duty. Seven trucks were used to fight the blaze. However, firemen said employees had been fogging inside for insects.

A strong wind from the south and southeast fed the blaze and blew smoke swirling down between buildings on Broadway. Heat from the fire below was so intense spectators could not stand on the northeast corner of North Fountain and Broadway.

Power had been turned off in main lines near the hotel and affected about a four-block area surrounding the area. Missouri Utilities crews were here to handle power and keep live wires from falling on firemen or spectators.

Smoke was intense but much fire could be seen and lighted the immediate area. "It was just like daylight," one spectator said.

Firemen fought the blaze with three pumpers, and numerous hoses winding down Broadway. An 80-foot aerial ladder truck is credited with putting out much of the blaze. Firemen dept pouring water on from both beneath and abovek but water from above was most effective.

Firemen who fought the blaze on the aerial lader at times could not be seen because of intense smoke. Firemen switched at intervals. At some points, flames licked over the upper edge of the five story structure into the firemen's faces.

Mearlin Allen, 24, suffered minor burns on his shoulder from heat which went through his raincoat and clothing. He was not seriously injured and remained on duty. No other injuries were reported.

Spectators, estimated at 200 to 300, lined Broadway to watch. They thinned out at times and few were left as dawn broke. They presented no serious problems to the firefighting.

Extra police were ordered out at 4 by City Manager Paul F. Frederick in case a crowd developed as the sun rose. Lights came back on at 4:45.

At 5:30 Vernon Nations, 525 South Sprigg, came to open up the coffee shop. He had been remodeling it about the past three weeks. Today was to be his opening day. He found the restaurant in ruins.

"I didn't know it until I got down here," he said. He estimated his loss at $2,500. He did not have insurance, he said. No other damage estimates could be obtained.

The ruins continued to smolder this morning and are expected to for several days. A shell only remains of the front section. Rubble is stacked up at ground level where floors had fallen through.