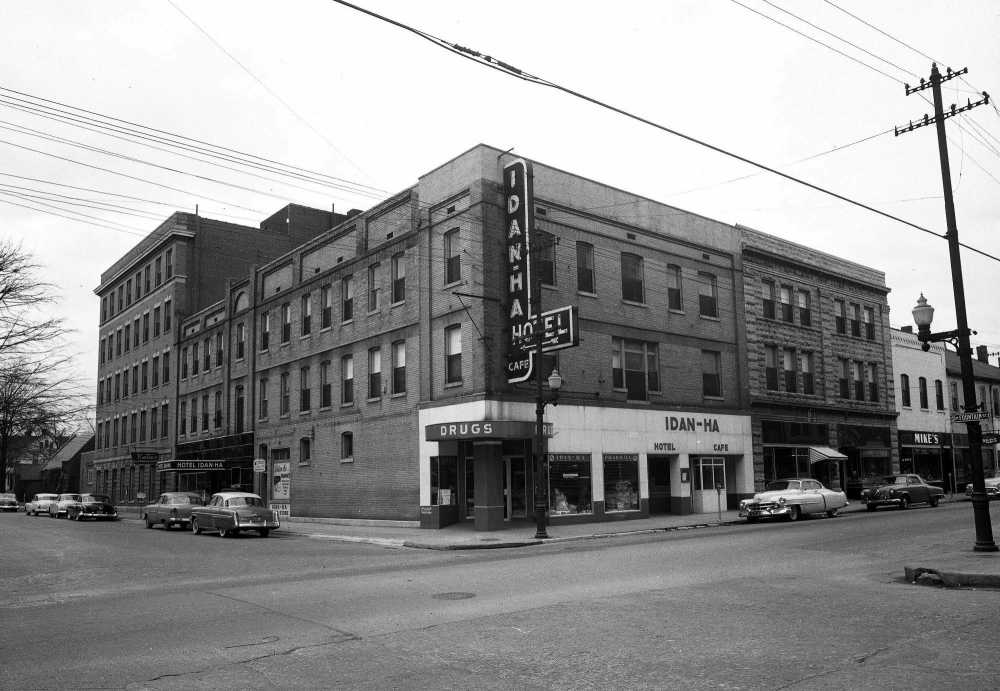 This picture of the Hotel Idan-Ha shows a three-story hotel at the southwest corner of Broadway and Fountain that was built in 1908-09 by A.J. Flentge of Cape Girardeau.

A five-story structure to its south was apparently built in 1912.

In 1918 the owner (by then George McBride) purchased the adjoining Broadway property on the west, with plans "as soon as the war is over" to enlarge the hotel.

Walter Black bought the business in the early 1920s and in 1922 announced plans to enlarge the A.C. Vasterling building (the stone-faced structure) to five stories to match the southern addition. The following year, the plans were re-drawn and a single story was added to the Vasterling building (making it the three-story building in the photo). With that improvement, 44 more rooms were added to the hotel, for a total of around 100 rooms.

Renovations were done periodically. One in 1923 noted the installation of water in 15 rooms in the "old part" of the hotel.

It also went through numerous owners and managers, as well as various court proceedings.

The hotel housed various businesses through the years, including barber shops, a saloon, a pharmacy, a café, a restaurant, a tobacco store, doctors' offices, a women's apparel store (Milady's) and the very popular Rainbow Room.

Among people to stay at the Idan-Ha were Evangelist Billy Sunday (1926) and members of the Fort Wayne, Ind., and Muskegon, Mich., teams of the All American Girls Baseball League, who trained in Cape Girardeau in 1950.

Read more about the fire in this blog: Fire destroys Hotel Idan-Ha