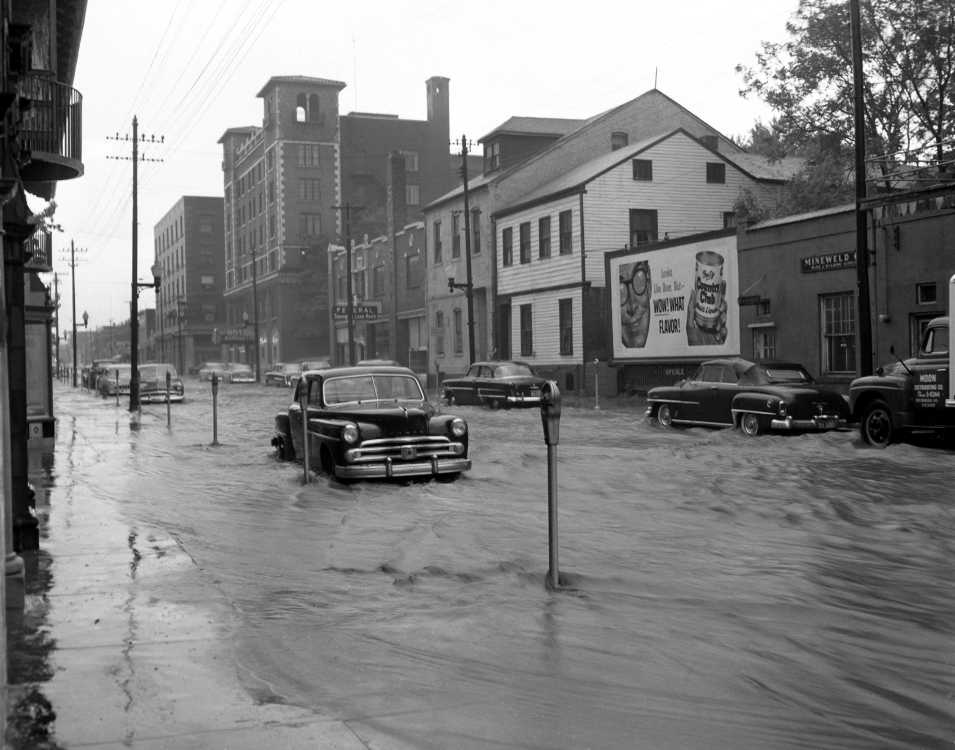 Another riverlike scene resulted during Tuesday's storm as water reached close to floor boards of automobiles parked on Broadway in the block between Lorimier and Fountain streets. Cars were forced to remain stationary until the water level dropped. (G.D. Fronabarger photo)

The Marquette Hotel was tallest building on the street at that time.

The 13-story Hirsch Tower would be constructed about 15 years later. It became the home of KFVS television after a topping out ceremony in December, 1967.

On that site, this photo shows a brick building at 314 Broadway, east of First Federal Savings and Loan in the Surety building. On the sign out front: Abstract Title & Guaranty Corp.

Our librarian, Sharon Sanders, provides some information from city directories for that address:

The frame building to the east of 314 Broadway was torn down in February 1960 by Oscar C. Hirsch. "My guess is that the brick building came down about the same time," Sanders said. "At the time the frame building was raised, it was estimated to be about 80 years old (built circa 1880)."

"The house had weatherboarding outside. When the structure was put up, the timber frame was built, including angle braces and studdings. Then the brick wall was built in and around the wood frame. Then weatherboarding was applied outside. The opposite procedure often is followed now, with the brick veneer put outside."

East of this site is a billboard for Country Club malt liquor.

City directories show Mineweld was at 308 Broadway from the late 1940s to mid-1950s. Victor Howard was manager.