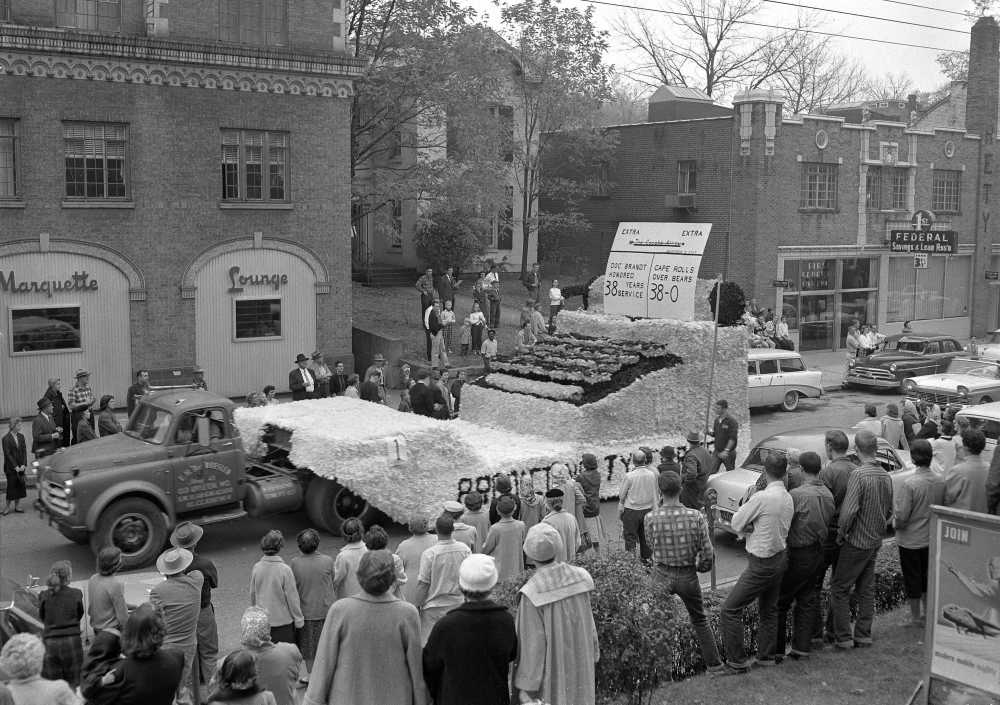 Crowds watch the homecoming parade for Southeast Missouri State College on Broadway in this picture taken on Nov. 2, 1957. It was published on the front page of the Southeast Missourian on Nov. 4, 1957. The entry was by Sigma Phi Epsilon and Sorosis Society. It won first place in the decorated float division of the parade.

The float is a giant typewriter with the student newspaper, Capaha Arrow, announcing the score of the homecoming football game with Southwest Missouri State of Springfield.

The actual score of the homecoming game: Indians 20, Bears 0.

No doubt the Indians wanted revenge that year as they lost to the Bears 25-0 in 1956.

An announcer for KFVS radio can be seen behind the float standing behind a microphone in the front yard of the radio station.

The Marquette Hotel is at left. At right is First Federal Savings & Loan.

The other headline on the Capaha Arrow: "Doc" Brandt honored, 38 years of service.

There are a few early arrivals, but the majority of former students and graduates of State College returning for the 1957 Homecoming aren't expected until tomorrow; one of the highlights of the program will be a luncheon honoring professor C. Clyde Brandt, who retired this year after 38 years as director of the college's choral and glee club groups.

Read more about KFVS in this blog: