Discover Nature
Candice Davis
Candice Davis is the Media Specialist for the Missouri Department of Conservation's Southeast and Ozark regions. Though raised to appreciate the Missouri outdoors, Candice is discovering nature on a new and exciting level as she gets up close and personal with snakes, insects, and Southeast Missouri's diverse landscape. Her goal is to share her learning experiences and show Southeast Missourians how they're directly connected to their land.
Recent posts
Archives

How to diminish an unlimited resource 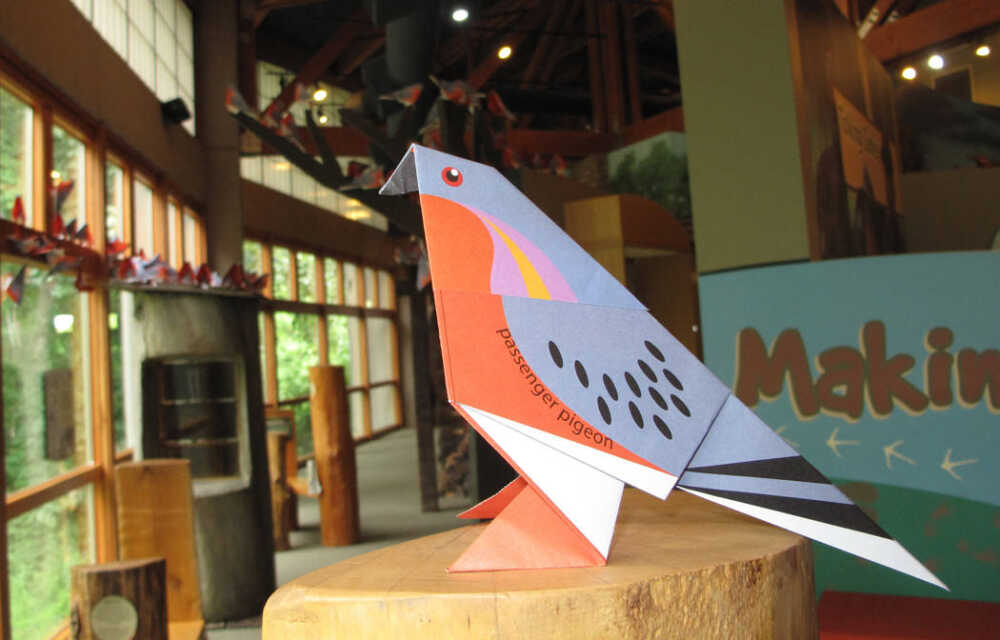 Throughout the month of September, a "flock" of Passenger pigeons is growing at the Cape Girardeau Conservation Nature Center. Visitors are encouraged to add to the flock when they visit the center. (Photo by AJ Hendershott)

One hundred years ago, what was once thought to be a permanent fixture in American skies faded away forever. Sept. 1 marked the extinction of the Passenger pigeon. The last known Passenger pigeon died at the Cincinnati Zoological Garden on that day in 1914.

The Passenger pigeon inhabited nearly every forested area in the eastern portion of North America, according to Wildbirds.org. The significance of the disappearance of the Passenger pigeon lies in the fact that it was once the most abundant species ever known, recognized by many when flocks would be so dense they would darken the sky. In the nineteenth and early 20th centuries, the birds disappeared.

Today, the only way to get an appreciation of this long-gone species is to look back at stories told by individuals who were around to witness the sight of the huge flocks. Famous ornithologist John James Audubon wrote about a day he witnessed the largest flight of wild pigeons on the banks of the Ohio River.

"The air was literally filled with them; and the light of noonday was obscured as by an eclipse," Audubon wrote.

According to Wildbirds.org, Audubon estimated the number of pigeons passing overhead, in a flock one mile wide, for three hours, traveling at the rate of a mile a minute, allowing two pigeons to the square yard, at more than one billion pigeons.

Passenger pigeons were grayish blue on the head, back and wings, with a reddish-fawn colored underbelly. The lengthy tail extended out more than half of the bird's length.

Sara Turner, the Cape Nature Center manager, said it's important to remember the plight of the Passenger pigeon to ensure history doesn't repeat itself with any of our still thriving wildlife species.

"It can be easy to see an abundance of wildlife and take it for granted," she said. "Knowing history helps us to act swiftly, and hopefully efficiently, to protect the very valuable species that remain with us."

The Cape Nature Center has several events scheduled to celebrate the Passenger pigeon in September.

Leaving the Station: The Last of the Passenger Pigeons

During this first-person presentation, experience "first-hand" perspectives from the mid-1800s from a son of a market hunter. He'll bring Passenger pigeons to life through storytelling as you learn about this incredible chapter in history. This month marks the 100th anniversary of losing the last Passenger pigeon. Youth and adult groups welcome.

Film Premier: "From Billions to None"

From Project Passenger Pigeon comes an incredible film that brings history to life, telling the story of the most abundant bird in North America that is now absent from the planet. "From Billions to None: The Passenger Pigeon's Flight to Extinction" provides information about these incredible birds, insight into their demise, and hope for future bird species. A discussion will be held afterwards. For more information about the film, visit www.passengerpigeon.org/thefilm. Youth and adult groups welcome.

Come learn about the extinct species of our state, how you can help the endangered species here, and fold an origami pigeon! Youth and adult groups welcome.

To research the Passenger pigeon, there are several resources available online, such as Wildbirds.org and Passengerpigeon.org. For more information on nature programs at the Cape Nature Center, go to www.mdc.mo.gov.