Discover Nature
Candice Davis
Candice Davis is the former Media Specialist for the Missouri Department of Conservation's Southeast and Ozark regions. Though raised to appreciate the Missouri outdoors, Candice is discovering nature on a new and exciting level as she gets up close and personal with snakes, insects, and Southeast Missouri's diverse landscape. Her goal is to share her learning experiences and show Southeast Missourians how they're directly connected to their land.
Recent posts
Archives 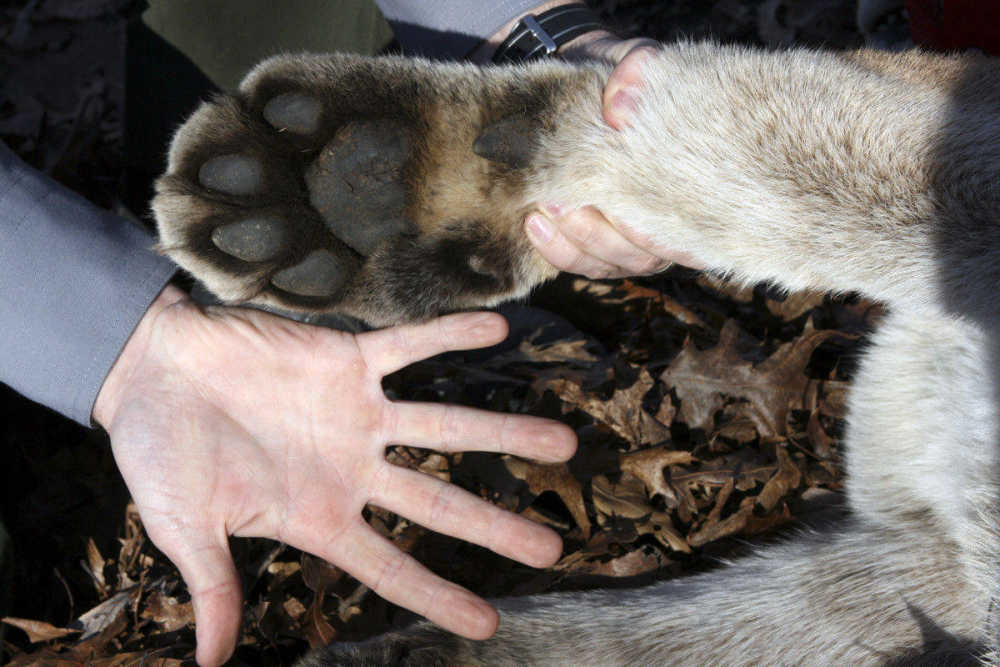 Conservation Agent Eric Long compares his own hand with the paw of a sedated Mountain lion in Reynolds County. This cougar was released at Current River Conservation Area after it was caught in a trap near Centerville. (MDC photo by Candice Davis)

Finding tracks on your property can be exciting, especially if they're large and unfamiliar. Determining the culprit who left those tracks behind is easier if you know what to look for.

The recent experience with the live Mountain lion trapped near Centerville was a wonderful opportunity for an in depth lesson in track identification. While the lion was sedated, Missouri Department of Conservation (MDC) Resource Scientist Jeff Beringer showed me the Mountain lion's paw and pointed out what to look for in a Mountain lion track.

Beringer said dog tracks are often mistaken for Mountain lion tracks. One of the best ways to quickly determine which animal it was is to attempt to draw an "X" through the center of the paw print.

Beringer also pointed out that the toe pads on a Mountain lion are shaped like a teardrop, where a dog's toe pads are perfectly round. Also, because a cat's claws retract, there will be no claw marks in the track left by a Mountain lion. Prints left behind by a dog will have claw marks.

One of the most telling aspects of a Mountain lion's print is the mark left by the large main pad. The top of the pad has a divot, instead of coming to a point. The bottom has a distinct M or W shape, depending on the perspective.

These clues can help in determining what might've left behind a suspicious track on your property. If you've gone through the criteria and think you might have a Mountain lion track on your property, cover it with a coffee can or other container to protect it from the elements. Then call your local conservation agent or report it to the MDC's Mountain Lion Response Team at mountain.lion@mdc.mo.gov.

For a visual lesson in identifying Mountain lion tracks, check out this video: