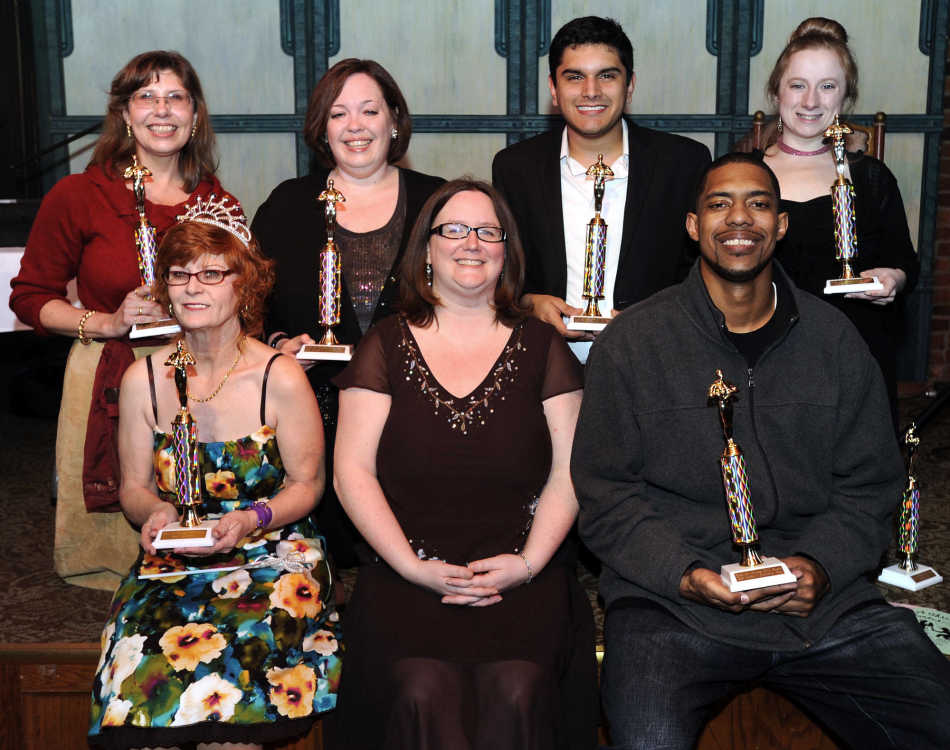 Last evening River City Players held their annual Abbott Awards. It is always such an exciting and fun even. After all it is our Oscar night. Actors, crew, directors, co-directors of the season are nominated for their role or roles in a production or in some cases more than one production. I am proud to list the names of those that won an Abbott last evening.

BEST SHOW: "The Smell of the Kill" Director Holly Raines

BEST CO-DIRECTOR: A.J. McNamara for "The Smell of the Kill"

BEST PERFORMANCE BY AN ACTOR IN LEADING ROLE: Michael Toeniskoetter as Ramon in "A Christmas Cactus"

BEST PERFORMANCE BY AN ACTRESS IN LEADING ROLE: Tana Howard as Adelaide in "A Christmas Cactus"

BEST PERFORMANCE BY AN ACTOR IN A SUPPORTING ROLE: Derrell Minner as Hamlet in "A Night in the Theatre"

BEST PERFORMANCE BY AN ACTRESS IN A SUPPORTING ROLE: Andrea Shovan, as Freda in "A Christmas Cactus"

We also had some very special awards that are given by the President to those that stood out for a specific reason. Here are the names of those winners:

Molly Woeltje for stepping in a week before opening night to play Edna Louise in "Come Back to the Five and Dime Jimmy Dean, Jimmy Dean"

Brian Hopkins for best cross dresser by playing Joanne in "Come Back to the Five and Dime Jimmy Dean, Jimmy Dean"

Roseanna Whitlow-Greenwood for outstanding job as Secretary of RCP

Holly Raines for outstanding job as Treasurer of RCP

So, there you go, all the winners for our 2012 Season. Now moving on with our 2013 season. Auditions will be held one week from today January 27 for "Retro Radio" at Port Cape starting at 2:00 P.M. No prep needed. If you would be interested in being a jingle singer come prepared to sing a song from the 30's. As always, I will see you at the THEATRE!