Dodging Drool
Roberta "Bobbie" Beach
Bobbie blogs about dogs as she lives with mostly hounds. While no longer rescuing, she maintains Silverwalk Hounds Sanctuary for the remaining Sanctuary dogs as well as occasional fosters. She enjoys talking about dogs, including rescue, fostering and adoption.
Recent posts
Archives

Autumn is my favorite time of year.  The colors, the smells, the changing of seasons...and preparing the house for winter.  Well, that is not my favorite chore but this year, I have some real help in a handyman who is getting the outside pen and the breezeway more safe for the dogs this winter.  The pen has been fine but was under what had been a very lovely large old pergola, 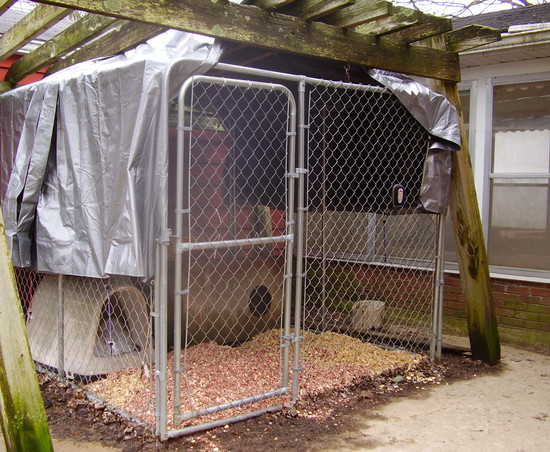 though it never had any flowers or vines.  Over the years, it has rotted from the inside out and was now leaning against the pen.  So G. removed it, burning it in my burn pile.  We now have a plan for a supported tarp over the pen where rainfall will shed one way into the yard, keeping the pen itself dry.  I like having the pen.  Though I rarely have outside dogs, it comes in handy for isolation or for behavior modification.

Coonhounds, as previously noted either here or at Dog Blessed, had broken glass in two areas of the breezeway.   No one was hurt but I didn't want to take any chances.  Some friends came out last week to help secure the broken glass area so 1) no injuries would occur and 2) no escapes would happen!  An entire frame of two large windows is partially dis-lodged thanks to former resident, blind Bloodhound Katie.  She had to push it out to leave the breezeway to follow her love, Shiloh.  Came home safe and sound to my voice and now, of course, is in her best home. 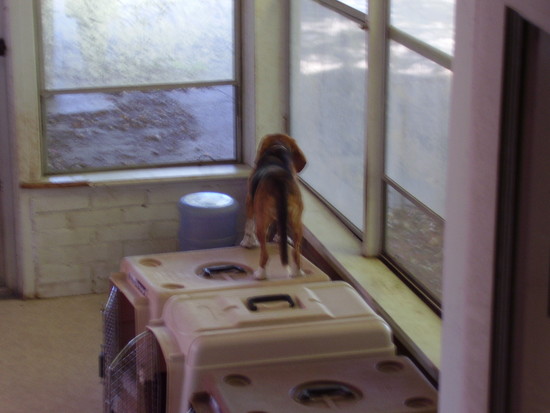 The breezeway in earlier days....Annie Beagle keeping an eye out

To top off the day, Silverwalk had a volunteer!  So nice to have help.  She cleaned out the breezeway, sweeping and washing the floors and walls as well as the crates.  E. is planning to come out weekly.  Thank you so much!

The whole week has been interesting as the water pipes are finally being put in for the private well to serve the county residents who signed up - well, that's my understanding and I have yet to hear more.   With the pipes being placed in the front and G. working all week in the back, the hounds have felt a bit discombobulated.  Lady Bug, in particular, did not care for the disruption to our "routine" with new people hanging around and new equipment outside the yard.  She bayed and bayed her displeasure. 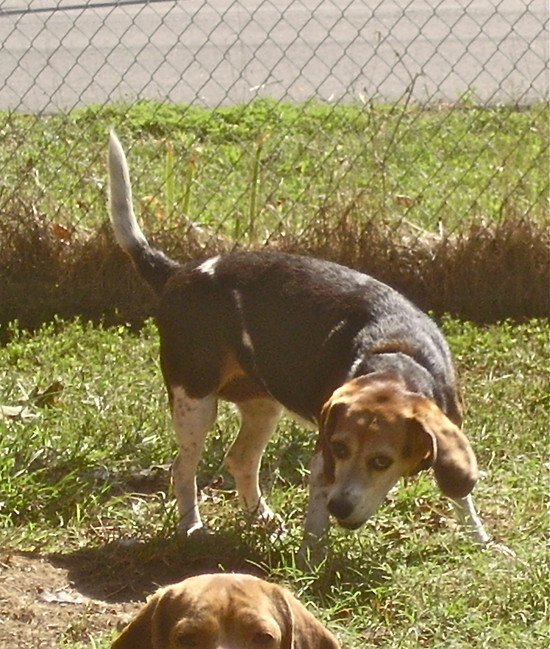 The others adapted with more ease; in fact, Margie tried to help dig up Quikrete this morning as we were chatting....we put a stop to that digging.  I did ask the gentlemen putting in the pipes, if they ended up with extra dirt, I could use it to fill holes.  I was pleased to hear the plan to completely fill in the trench for the pipes, then come back and re-fill after it settles.

Even though the weather is like normal summer weather, real fall and winter weather is right around the corner.  This year, I hope to be better prepared for all of us.