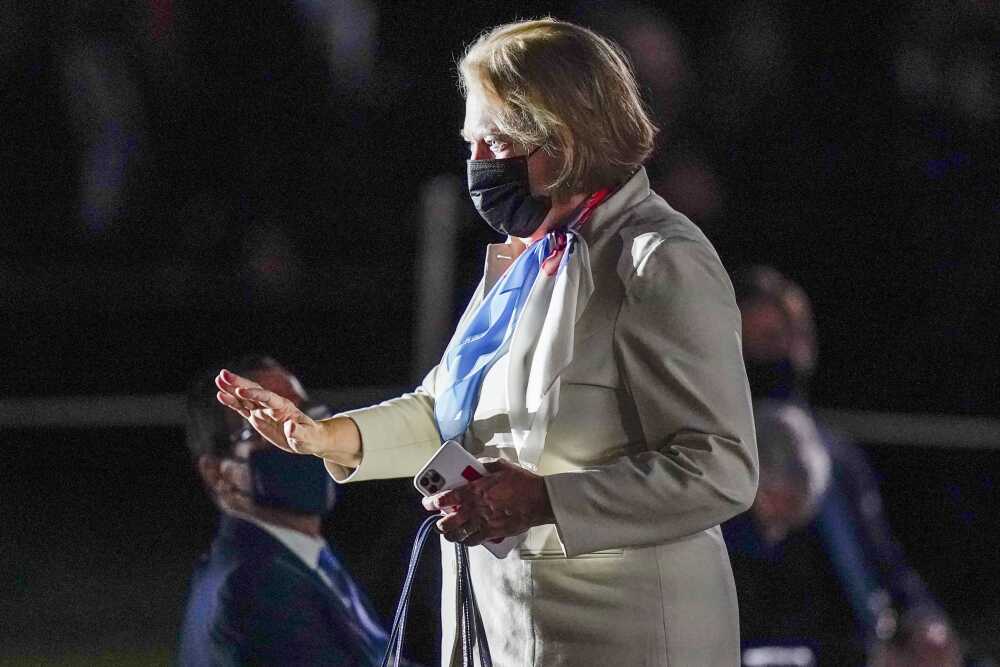 Virginia Thomas, wife of Supreme Court Justice Clarence Thomas, arrives to watch Amy Coney Barrett take the Constitutional Oath on Oct. 26, 2020, on the South Lawn of the White House in Washington. Virginia Thomas has agreed to participate in a voluntary interview with the House panel investigating the Jan. 6 insurrection, according to her lawyer.
Patrick Semansky ~ Associated Press, file

WASHINGTON -- Conservative activist Virginia Thomas, the wife of Supreme Court Justice Clarence Thomas, has agreed to participate in a voluntary interview with the House panel investigating the Jan. 6 insurrection, her lawyer said Wednesday.

Attorney Mark Paoletta said Thomas is "eager to answer the committee's questions to clear up any misconceptions about her work relating to the 2020 election."

The committee has for months sought an interview with Thomas in an effort to know more about her role in trying to help former President Donald Trump overturn his election defeat. She texted with White House chief of staff Mark Meadows and contacted lawmakers in Arizona and Wisconsin in the weeks after the election.

Thomas's willingness to testify comes as the committee is preparing to wrap up its work before the end of the year and is writing a final report laying out its findings about the U.S. Capitol insurrection. The panel announced Wednesday that it will reconvene for a hearing on Sept. 28, likely the last in a series of hearings that began this summer.

The testimony from Thomas -- known as Ginni -- was one of the remaining items for the panel as it eyes the completion of its work. The panel has already interviewed more than 1,000 witnesses and shown some of that video testimony in its eight hearings over the summer.

The extent of Thomas' involvement ahead of the Capitol attack is unknown. In the days after The Associated Press and other news organizations called the presidential election for Biden, Thomas emailed two lawmakers in Arizona to urge them to choose "a clean slate of Electors" and "stand strong in the face of political and media pressure." The AP obtained the emails earlier this year under the state's open records law.

She has said in interviews that she attended the initial pro-Trump rally the morning of Jan. 6 but left before Trump spoke and the crowds headed for the Capitol.

Thomas, a Trump supporter long active in conservative causes, has repeatedly maintained that her political activities posed no conflict of interest with the work of her husband.

"Like so many married couples, we share many of the same ideals, principles, and aspirations for America. But we have our own separate careers, and our own ideas and opinions too. Clarence doesn't discuss his work with me, and I don't involve him in my work," Thomas told the Washington Free Beacon in an interview published in March.

Justice Thomas was the lone dissenting voice when the Supreme Court ruled in January to allow a congressional committee access to presidential diaries, visitor logs, speech drafts and handwritten notes relating to the events of Jan. 6.

Ginni Thomas has been openly critical of the committee's work, including signing onto a letter to House Republicans calling for the expulsion of Reps. Liz Cheney of Wyoming and Adam Kinzinger of Illinois from the GOP conference for joining the Jan. 6 congressional committee.

CNN first reported that Thomas agreed to the interview.

It's unclear if the committee's hearing next week will provide a general overview of what the panel has learned or if it will focus on new information and evidence, such as any evidence provided by Thomas. The committee also conducted several interviews at the end of July and into August with Trump's Cabinet secretaries, some of whom had discussed invoking the constitutional process in the 25th Amendment to remove Trump from office after the insurrection.

Cheney, the committee's Republican vice chairwoman, said at the panel's most recent hearing in July that the committee "has far more evidence to share with the American people and more to gather."