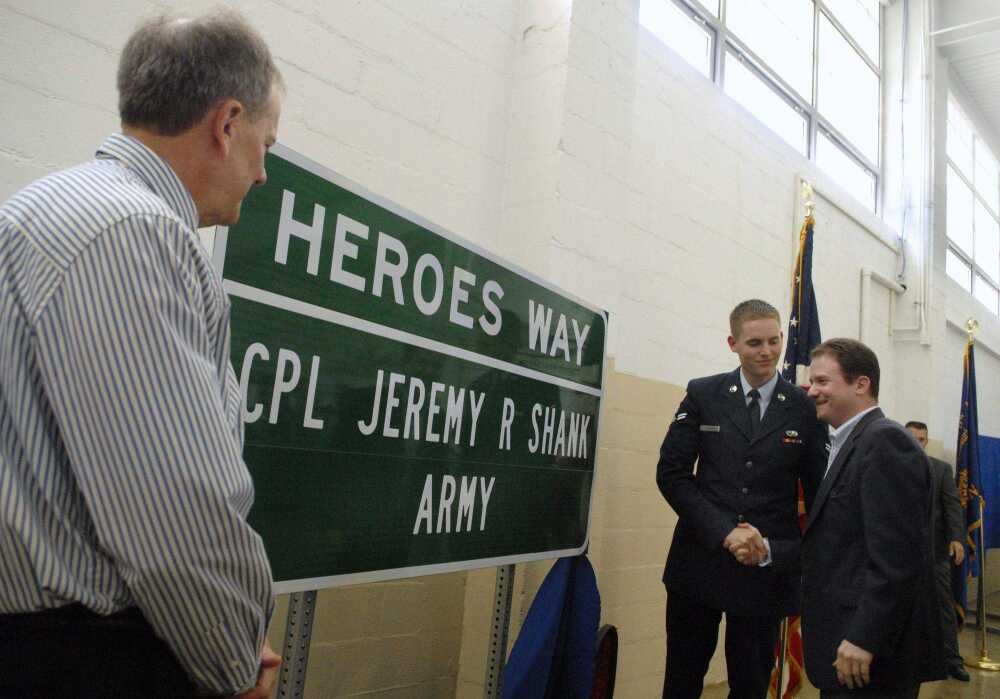 Nathan Shank, of the U.S. Air Force, shakes hands with state. Sen. Jason Crowell after he and father, Jim Shank, left, unveiled a sign dedicating a portion of Interstate 55 at Exit 102 in Jackson to Nathan's brother, Cpl. Jeremy Shank, who was killed while serving in Iraq in 2006. A Heroes Way Interchange Dedication Ceremony was held in May 2010 at the National Guard Armory in Jackson to honor Shank and three other local soldiers killed in Iraq or Afghanistan.
Southeast Missourian file

Special Memorial Day content will be published in the Weekend Southeast Missourian and online through Sunday.

Army Cpl. Jeremy Shank was just weeks into his deployment in Iraq before his life was taken at the age of 18.

Shank, a graduate of Jackson High School, enlisted in the U.S. Army on May 31, 2005. His father, Jim, said his son was made for military service and always enjoyed the outdoors.

"When he was a little kid he called himself a gun guy, always walking along carrying a pistol in a holster or carrying a rifle. He always enjoyed hunting," Jim Shank said. "He had a hard time finding himself in high school during his junior and senior years. After he enlisted, that was all he was concerned about. He just wanted to join the Army."

During his high school years, Jeremy Shank busied himself with extracurricular activities, including playing football for the Jackson Indians football team as wide receiver and defensive back. He was on a traveling soccer team and hunted deer, turkey and squirrel.

During his time in the military, the young soldier showed his motivation to his superior officers according to his father.

"His drill sergeant would get angry with him because he would say, 'You're going to outrank me before you get much older'. It was just what he wanted to do," his father said. "He was just gung-ho about everything and just enjoyed the camaraderie and enjoyed everything he had to do to do it."

Jeremy Shank graduated basic training to become an infantryman at Fort Benning, Georgia, before being assigned to A Company 2-27 on March 26, 2006 where he served as a mortarman, a soldier who fires mortar shells. He was deployed to Forward Operating Base McHenry, located in Hawijah, a province of Iraq, on Aug. 23, 2006. As he was relieving his friend and fellow soldier, Chris, who bent over to pick up a lighter, Shanks was shot by a sniper and died Sept. 6, 2006 -- 14 days after being deployed.

"Chris is still dealing with the fact that he thinks it should have been him. They were the closest buddies," Jim Shank said. "It has affected him all his life. He has stayed in contact with myself and Jeremy's brother. He just went over to Ukraine to see what he could do to help the people there."

In 2010, Jeremy Shanks was memorialized with a Heroes Way sign located on Interstate 55 at Exit 102 in Jackson. His father and brother, Nathan, were in attendance at the Heroes Way Interchange Dedication Ceremony and state Sen. Jason Crowell unveiled the sign. Jim Shank said he memorializes his son through a personal item he received from Shank's belongings.

"We're very God-centered, and when we got his belongings back, he had a small Bible with his belongings along with a MRE package stuck as a bookmark in it. We had always hoped he would find Jesus and that was our hope, that when he was deceased that he had found Him," Jim Shank said. "He got into trouble, and the Army straightened him out, and he was a good soldier. He had gotten killed in September and was coming home in November to get married."

Jim Shank encouraged families who are struggling with losing a loved one to military service to reach out to organizations designed to help to talk through their troubles. One such organization is Travis Manion Foundation, travismanion.org.

News about Cape and Jackson matters. Sign up for free updates.
Cpl. Jeremy Shank
Cpl. Jeremy R. Shank, 18, of Jackson passed away Wednesday, Sept. 6, 2006, while serving his country in Iraq. Shank was born Feb. 29, 1988, in Cape Girardeau, to James A. and Deborah J. Vaughn Shank. He attended Jackson High School. He enlisted in the United States Army May 31, 2005, and graduated from Basic Training and Advanced Individual... 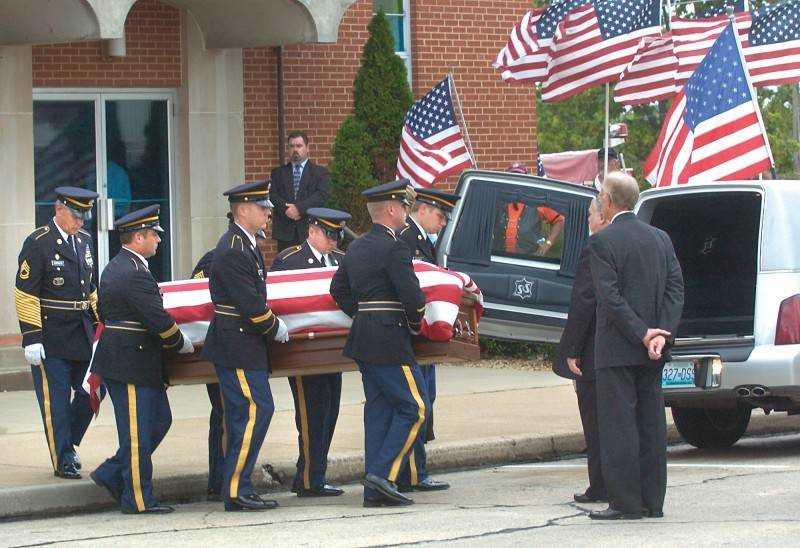 A community mourns
JENNIFER FREEZE ~ Southeast Missourian
As a child, Jeremy Shank patrolled the streets of Jackson with a toy rifle over his shoulder and a toy pistol in his jeans. He called himself the "gun guy," his father Jim Shank said. "Jeremy had always been the gun guy, even up to his last breath," Jim Shank said Sunday at his son's funeral... 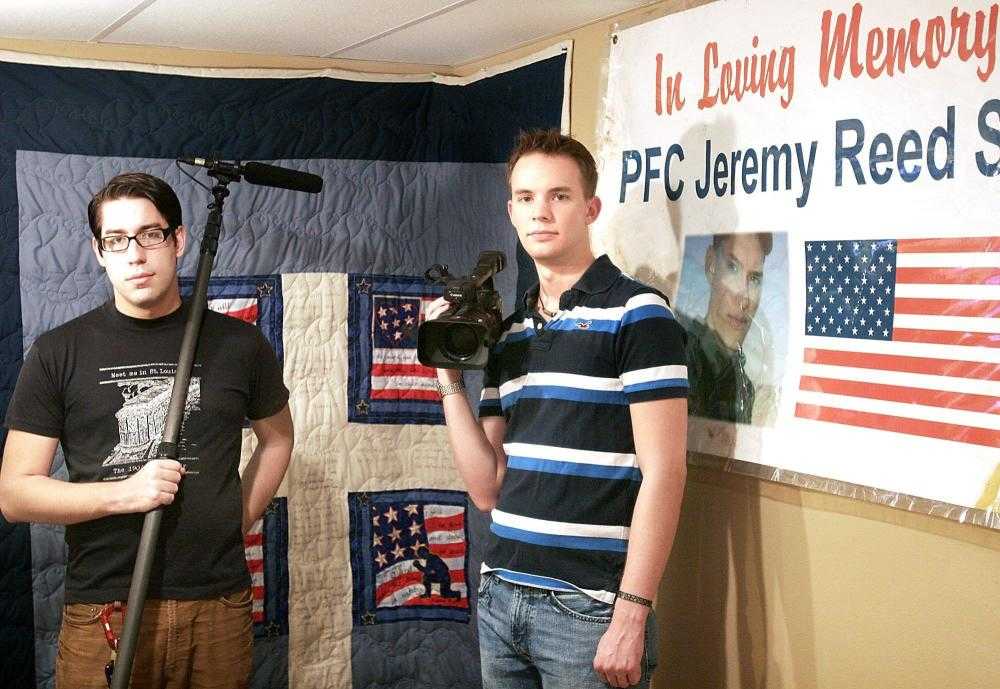 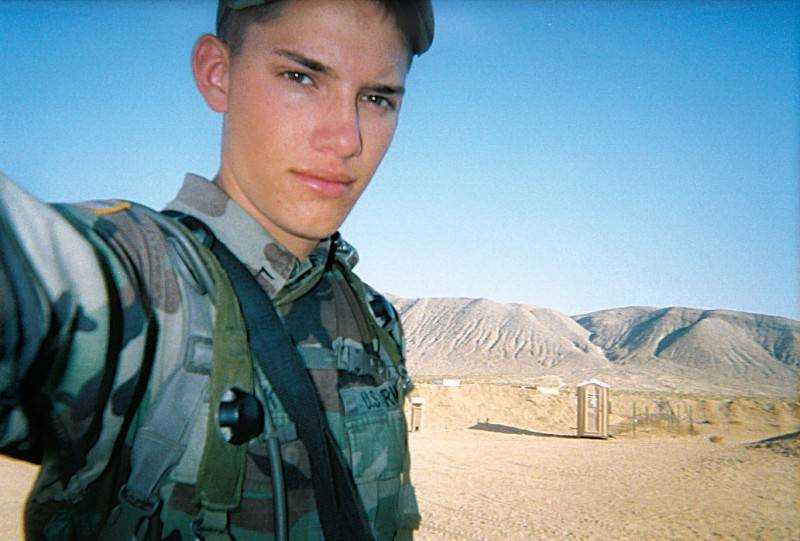 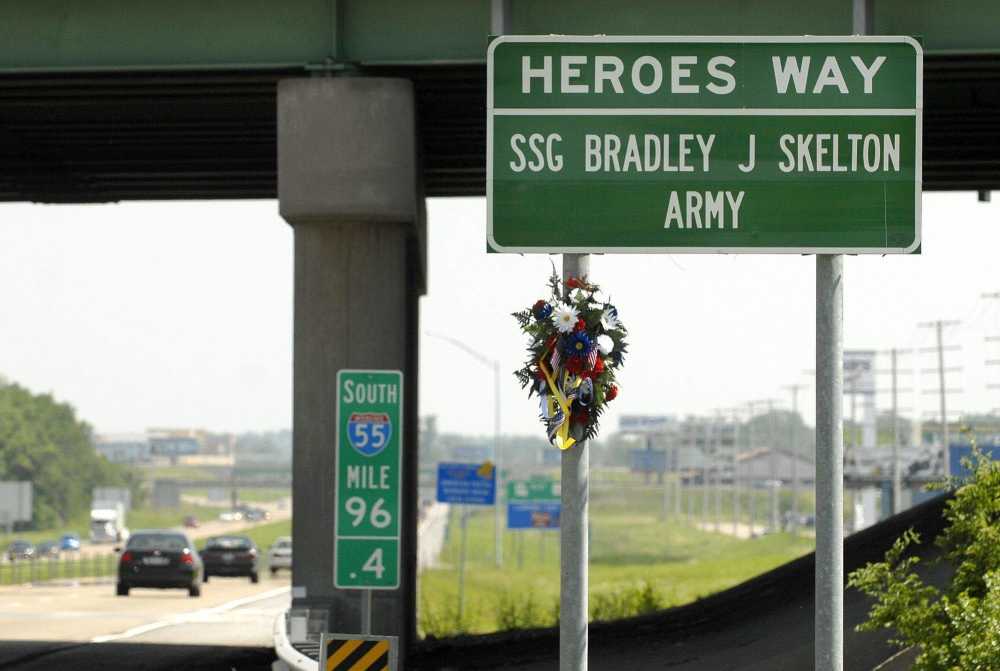 Heroes Way efforts continue to spread in Missouri, elsewhere
By M.D. Kittle ~ Southeast Missourian
A sign on Interstate 55 honors Staff Sgt. Brad Skelton's sacrifice for his country. Skelton went through life with a grin on his face and an unshakable loyalty for his family, friends and country in his heart, according to one of the soldier's closest comrades...